As I’ve mentioned, I’m an archivist. I’ve been recording stuff off of the tee vee for decades. I first sat a portable Panasonic tape recorder in front of the set to record skits from Saturday Night Live, old Bugs Bunny cartoons, episodes of WKRP in Cincinnati.... when I got a VCR, I started videotaping. For the most part, I haven’t taped too much in the past years, but that may change now that I got a DVD Recorder.

Since the beginning, I’ve labelled my TV compilations “Found a Job,” after the Talking Heads song on their second album, More Songs About Buildings and Food. "Found a Job” is about a couple, Bob and Judy, who write for television (“Judy’s in the bedroom inventing situations / Bob is on the street today scouting up locations / They’ve enlisted all their families / they’ve enlisted all their friends / it helped save their relationship / and made it work again”) 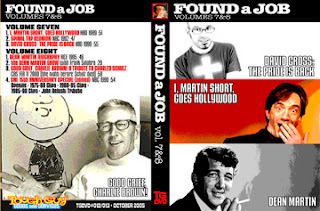 I’ve spent too much time over the past few weeks putting together the latest incarnation of Found a Job. At first, I was determined to just keep the cream, no-brainers like I, Martin Short, Goes Hollywood, Steve Martin’s 1980 NBC special, Comedy is Not Pretty and Good Grief, Charlie Brown! A Tribute to Charles Schulz, which aired on CBS the night before he died.

But as I was digitizing sometimes fuzzy video, the relative permanence of the DVD format got to me. I’d be fast forwarding past something I didn’t think I wanted to keep anymore.... like the Saturday Night Live 15th Anniversary Special.... and I’d suddenly realize that I wanted to save Dan Aykroyd and Jim Belushi’s angry, poignant introduction to the John Belushi tribute from that special. Watching a few minutes of Wilco on Hard Rock Live from 1996 reminded me why they used to be one of my favorite bands.

I’ve got a number of themed series. In addition to the catch-all Found a Job, there’s Comic Book TV, a Christmas Comp (which will make the Xmas Video Party so much easier this year), NRV (which stands for “Noisy Rock Videos”) and a few collections of shows that don’t seem destined for DVD, like Dr. Katz, really old Late Night clips and the remainder seasons of Larry Sanders.

Of course, making the covers for these things takes almost as much time as dubbing them. God forbid I just jot the track listing on a piece of paper and stick it in the case. That just wouldn’t do. At least I’ve come up with a template that I’ll re-use, saving me a lot of time (no, really, that’s not just a rationalization....).

so you have the classic steve martin special " comedy is not pretty" on tape? anyway to get a copy of it from you man?! I've been looking high and low for it for some time!!