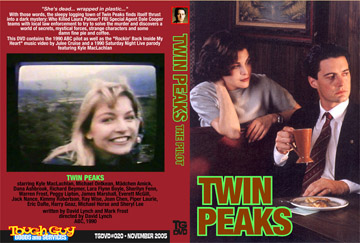 So, the latest DVD project is Twin Peaks. I have the first season box, but it looks like there’s still a ton of red tape preventing the Pilot and Season 2 from coming anytime soon and since I have them all on VHS, a-dubbing I will go.

Well, almost all of them. I seem to missing one volume, the penultimate episodes leading to the frustrating non-conclusion that left Agent Cooper stranded in the Black Lodge. No matter.... while those episodes are not on DVD, they ARE available on (what I hope will not be copy-protected) VHS, available at used prices through Amazon. Phew.

Yes, I’m going to pay money for videotapes merely to transfer them to DVD-R. I wish I could say it will be the first time, but that honor goes to A Very Brady Christmas (but more on that in a week or so).

There are a number of incredible things about Twin Peaks as I watch it now, 15 years later. One is the gloriously slow pacing of the thing. Prime example: the opening of the second season premiere, with the dottering hotel waiter bringing the warm milk to Agent Cooper, who lies on the floor bleeding from a gunshot wound. The old man says over and over, “I heard about you!” and flashes the “thumbs up” sign, blindingly oblivious to Cooper’s plight. Cooper, ever the zen master, accepts the futility of trying to get the waiter to call for help, signs for the milk (including gratuity) and returns the thumbs up.... the first two times, anyway. Then he shoos the old man away, waiting for the giant to appear and tell him three things.... It’s agonizingly slow, and I mean that in the best way.

Another thing I love is how all those clues... all those tiny bits and pieces that my friends and I obsessed over... the “R” under Laura’s fingernail... Hank’s domino... “The Owls Are Not What They Seem”... they all meant NOTHING. While most fans either refused to accept that fact or became angered at the sloppy bow that suddenly tied up the Laura Palmer murder (no doubt at ABC’s insistence), once I realized that everything David Lynch and Mark Frost concocted was merely to create MOOD, that there was no logical explanation for the horse in the living room or the more mystical elements of the show... it opened my mind about storytelling (much the way Hitchcock’s MacGuffin theory did). 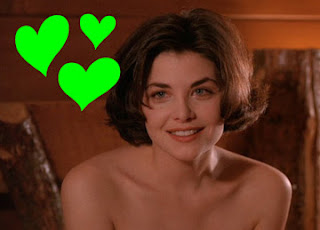 But boy, did my friends and I obsess. My then-girlfriend (now ex-wife) Erin, my brother Ken, my roommate Stacey, our friends Lou, Cindy, Amy and Dave.... we dissected everything from how Harry said “Wait... WHERE?” when hearing of the dead body... wrapped in plastic... instead of asking WHO? to the real reason that Andy cried so much....

We’d have Twin Peaks parties and buy donuts and drink coffee and freak out every time Killer Bob popped up. And all of us, male and female, lusted after those Twin Peaks babes (then and now, to me, Audrey was the hottest). There was so much excitement over that show, who cares if all that speculation turned out to be pointless?

For me, running my little indie record store added to the excitement. I had a close relationship with the Warner Bros. Records alternative marketing dept., and they were doing a ton of promotion for the show, the soundtrack and Julee Cruise’s sister record, Floating Into the Night. I got posters, CDs (including the rare donut-promo of the Twin Peaks soundtrack), a copy of the pilot on VHS, featuring Julee’s video for “Rockin’ Back Inside My Heart” and best of all, a signed letter from David Lynch, thanking me (personally!) for listening to Julee’s record. Sure, there were a bunch of them personalized for indie record stores across the land, but that didn’t make it any less cool to me.

On November 11, 1990, the night after it was revealed that Leland killed Laura, nine friends and I saw Julee play the TLA in Philadelphia after an in-store signing at Third Street Jazz (RIP) and the show was red and eerie and perfect.

Twin Peaks was a cult phenomenon that, pre-internet, bound Peaks Geeks together with a red ribbon and a big sheet of plastic. It was pervasive. And so much damn fun.

And I’m sure that as soon as I finish burning those DVDs, they’ll announce the second season box. Darnit.
2 comments:

So, here’s the latest thing that’s annoying bartenders across the land: Dirty Martinis. They seem to be the trendy drink right now, and while they’re certainly less esthetically offensive than an Appletini or a Cosmo, there’s one problem with the Dirty Martini: Unless a bar has an incredibly large inventory of olives, they’re going to run out of the ingredient that makes it dirty: Olive Juice.

Most bars keep garnish trays containing just enough limes, lemons, cherries, olives et al to get them through the shift. And while bars usually buy olives in large bulk jars, there’s still only a finite amount of juice in there. And you have to keep some in the bulk jar to keep the olives fresh. So, for the most part, any bar that you patronize is likely to have enough olive juice to make a mere handful of Dirty Martinis. After that, the olive juice has run out. You can have a dozen olives in your Martini if you want, but you ain’t getting a dirty one after that. But try explaining that to the trendy drinker (oh, and note to Soledad O’Brien: There’s no such thing as “Martini Mix”.... stick to offering opinions on BABIES, since that seems to be the extent of your expertise).

People are utterly predictable at a bar. Bartenders can almost always guess who’s going to order the bad light beer, who the Guinness drinkers are and who’s gonna ask for some double-entendre-named shot that belongs in a house with Greek letters on the outside. Underage kids who attempt to get served almost always show their hand even before they order. First they stand about six feet away from the bar and carefully survey the scene while they try to work up the nerve to ask for their illegal drink. Then they walk to the bar and usually do one of two things: nervoulsy sputter out a too-sweet drink order that screams “I should be drinking milkshakes!” or, much funnier, order with a jaded vocal inflection that intimates that they are just so OVER IT: “Yeah, man, just gimme a beer,” the kid with the sprig of facial hair and the carefully held cigarette will say, not making eye contact with the bartender. He’s so world-weary and casual in a bar that he doesn’t even care about what BRAND of beer he gets. Kiddies, listen up: You’re not fooling anyone.

Now, when you ask the underage kid for ID, they have three options (four if you count offering a fake one): Pretend they didn’t bring or lost it (the usual tack), honestly admit that they’re not old enough (almost never happens), or (my favorite) SHOW the ID that proves they’re NOT old enough to legally drink and then PLEAD THEIR CASE. I’ve had this happen a dozen times. “C’mon man, it’s only a few months!” as if the law is flexible and the bartender’s prerogative. Or, even better, since I work in a rock club, “But I’m in the band!” as if the law is, You Must be 21... or in a Band.

Jesus, as if we don’t have enough crappy bands already!

Oh, and on an unrelated note, another thing to add to the list when I rule the world: The failure to properly cap a felt-tip marker, causing it to prematurely dry out, will be punishable by a hefty fine or imprisonment of up to two months per Sharpie killed. There’s just no excuse.
1 comment: