Can't I Tell Them About the Amazing Thing?

There are a few things that I can count on every December. One of them is that TV meterologists will editorialize cold, wintry weather as being bad. This is a subjective OPINION, not an empirical fact, and I would thank them to keep their summer-lovin’ prejudice to themselves. It’s gonna be cold? Excellent! It’s gonna snow? Hooooray!! As if it’s not bad enough that their predictions are wrong more than half of the time. 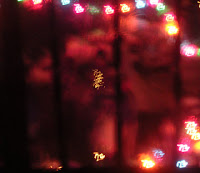 Another thing I’ve come to rely on is that my annual Christmas Video Party will yield another tale of humorous debauchery. Last year it was Mike O’s expletive-filled commentary on It’s a Wonderful Life. This year it was Johnny Hanlon’s climbing down the fire escape and over the backyard fence to crash the party my neighbors were throwing. See, we were watching them in the courtyard and marveling at the amazingly hideous holiday sweaters. In this very grainy photo, there’s a triangle of lights in the middle: that’s a light-up tree on a sweater.

The debate raged as to whether there was any irony present, so John, loaded up on sugar and alcohol, took it upon himself to investigate. Turns out, there was a contest for worst Xmas sweater.

Meanwhile, the rest of us feasted and fawned over the deleted “Sheep” scene from Monty Python’s Life of Brian, Santa in Animal Land, a Charlie Brown Christmas, How the Grinch Stole Christmas, the Guy Under the Seats: Christmas Under the Seats, the Spirit of Christmas, an SCTV Christmas, Pee-Wee’s Playhouse Christmas Special, Rudolph the Red-Nosed Reindeer and Elf. A big whopping load of Holly Jolly. 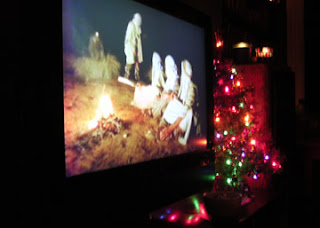 Despite being a fairly raging Atheist, I do truly love Christmas. Maybe it has to do with my obsession with childish things (which I never put away). Maybe it’s that I’m overly nostalgic (to a fault). Maybe I just really love snow, pretty lights and egg nog (oh, how I do). I tend to extrapolate that whole “good will towards men” bit more than making it a celebration of the birth of ol’ JC. I won’t go so far as to make any comparisons between myself and the Grinch or Ebenezer Scrooge, mostly because I haven’t had the epiphany they shared that gave them a selfless love for their fellow man 24/7, 365.... But I do feel different this time of year. As giddy as a drunken man, making a perfect Laocoön of myself.

Again with the Connelly

What a strange night at the bar last night. For one thing, the opening act was the very first gig for Miss Alexa Joel, yes, daughter of Billy and Christie Brinkley. And yes, Dad did come to support his progeny. Oh, he snuck in the back door and was hiding under an oversized hoodie, which may not have been necessary. I don’t think my bar is overrun with Billy Joel fans. Hey, if people left Frodo alone, they’d probably give the Piano Man space. I only got to see a few minutes of Alexa’s performance, but she definitely takes after Dad more than Mom. Interpret as you will.

But what happened at the very end of the night was even more bizarre. My Thursday night barback, Neel (Hoboken’s most beloved Indian bartender) was chatting with some friends of his as the topic of Celebrity Hotness came up. The issue of “who would you bang” naturally followed, and I was a bit taken aback by Neel’s answer: “Kiera Knightly.” Hell, I don’t even know to SPELL that and don’t feel like bothering to check! Neel! She’s a CHILD! A forgettable speck on the roster of unattainable pulchritude! Shoot higher! Neel’s young friend professed a desire for Charlize Theron, which is much better, but when I offered up my eternal impossible selection, the reaction shocked me.

“No contest, Jennifer Connelly,” I said, confident that everyone would concur.
“What are you, FORTY?” Neel’s pal said with a slight scowl.
“...Actually, yes, I am,” I responded, far less offended by the dig at my early middle age than the notion that Jennifer Connelly isn’t lustworthy! We’re not talking about Angie Dickinson here, Connelly is in no way past her prime... 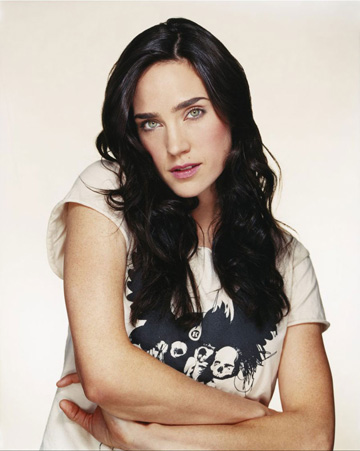 Kids these days. Wouldn’t know Hot if it bit ‘em in the Britney.
8 comments: