A few chunks of old-style celebrity gossip from last weekend:

• What ultra-hot rocker chick is not only beautiful and sweet, but a great tipper, leaving over 100% on a $38.00 tab?
• What producer / current member of seminal no-wave band ordered a QUADRUPLE Maker’s Mark on the rocks (cost of $24.00 please)
• What SNL cast member seems slightly annoyed at having to pay for drinks and wears white Nikes that say “SNL” on the tongue?
• What once-hot Hot-Topic-ready band representing everything that’s wrong with rock music today asked the beloved barback to join them on the road for an undisclosed purpose?
• What New Jersey punk / indie (puindie?) rock stalwart took to the stage with his lovely wife to sing a karaoke version of Journey’s “Don’t Stop Believing?”

The back of my box of Kellogg’s® Cracklin’ Oat Bran® boasts an exciting offer for movie lovers: It’s the FREE MOVIE DVD with purchase; Bring Home the Best Movies on DVD! offer... with five certificates from specially marked Kellogg’s products, you can get one of eight films. According to the box, “If you love movies, FOX SELECTIONS delivers the best entertainment on DVD. Try one ‘on us’ with this amazing offer - and you’ll want to collect them all!”

And what are these eight amazing chunks of Hollywood goodness? 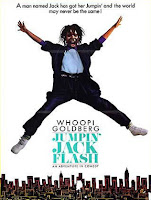 
Whoo! They sure do know how to appeal to the movie lovers, huh? But c’mon, what self respecting movie collector isn’t going to have all of those “best movies on DVD” on their shelves already?

In case anyone is unfamiliar with the screen gems listed, there are “Movie Lovers Collection Film Facts” inside the box, detailing each movie. Airheads is a “hilarious spoof of the music industry.” Beverly Hillbillies is a “riotous rags-to-riches story” that features “hilarious cameos.” Catch That Kid is “an exciting, high-stakes adventure!” Dr. Dolittle’s “wild and wooly free-for-all is your prescription for hilarious hijinks and ‘mischevious fun!’” Hmm, that word “hiliarious” pops up again, and why is “mischevious fun” in quotation marks? Because the movie is neither?

To continue, Gentlemen Prefer Blondes (the only arguable classic in the bunch, but still not a great movie) is “a wild and joyously funny ride,” Jumpin’ Jack Flash is a “suspenseful, fast-paced and murderiously funny comedy.” Lake Placid is a “terrifying tale of survival that ‘combines humor and thrills with remarkable deftness.’” That part in quotes had to come from a studio release and not a review, right? And finally, Love Potion #9 is summed up as “a charming romantic comedy.”

Who's responsible for this promotion? How to explain this motley mixture of crap and almost-crap? It definitely was not a selection chosen by a group of cineasts. Odds are, some guy at the Fox warehouse did inventory and there were too many of these titles.

According to the order form inside the box, there is a limit of 25 DVDs per household. So, I guess the target demographic is about a family of 8 or so who eats a TON of food (the “Kellogg’s products” include some Keebler crackers and cookies), doesn’t have a lot of disposable income and isn’t that discriminating when it comes to movies. Heck, for those folks, “Gentlemen” is probably going to be the LAST thing they’ll order!

In fact, upon close inspection of the order form, it seems as if they’re pretty sure the intended audience for this promotion is a bit slow on the draw. Fine print reminds the consumer such things as “Give street address to ensure delivery” and “We must have your zip code to mail order” and “If you do not make a selection, Kellogg will send a ‘PG’ movie of their choice” (whichever title is moving the slowest).

(As a curious side note, isn’t the company’s name the possessive form? I know I always refer to them as “Kellogg’s.” Man, if it’s actually “Kellogg,” that must drive their board of directors... or at least marketing dorks NUTS.

Anyway. I was two/fifths of the way there, but for a disposable-income abled pop culture dork like me, this promotion just isn’t worth the time it’d take to lick the stamps.... Damn, can’t use that phrase anymore! Agh, modern times.

Email ThisBlogThis!Share to TwitterShare to FacebookShare to Pinterest
Labels: advertising, for real, movies