So, I had a dream the other night. I was (apparently) now an actor. And I was shooting a scene for a movie. A love scene. With my female lead. Who was Faith Hill. And, okay, it wasn’t a love scene, it was a SEX scene. And as we’re shooting, with crew members all around, Faith, caught up in the moment, tells me to stick it in. For real. 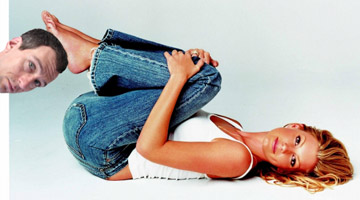 Now, don’t get me wrong, I’m not above the dorky celebrity lust. Anne Hathaway? Yes, please. But Faith Hill? Nothing against the pop-country duchess, she’s perfectly lovely and all, but for me? She’s not even on the list! What Faith Hill represents in my dream, I have no idea. Interpret away.

Ah, the celebrities. My pal Gary was working backstage at the Grammys this week (ending up on Entertainment Tonight quite a bit on Thursday) and sent me his thoughts via text message:

Oh, how I wish Gary were the host of Entertainment Tonight.

I didn’t watch the Grammys. My dislike for all awards shows is noted, but the Grammys are the worst. At least with the Oscars, Emmys and Tonys, there’s a BIT of crossover with critics’ lists. But the Grammys are ALL about the sales. I mean, come on... Kelly Clarkson? She makes Milli Vanilli’s statue look deserved.

And besides, I hate U2. I can’t think of another band I once loved (waaaay back in the day.... let’s say ‘81-83) that I now despise with every fiber of my being. Bono saying that Mariah Carey has the voice of an angel made me wanna get rid of Boy, October and War (I stopped after that). Yeesh. He makes Michael Stipe seem humble and reserved.

But I seem to be having an odd relationship with music lately. For the past few weeks, whenever I head into the city or out to run an errand, I leave the house with my iPod, but don’t use it. For some reason, music hasn’t been that important to me lately. I’ve yet to buy a CD this year and just today sold 40 CDs at the local record store.

I saw Matt Pond PA on Tuesday night and, somewhat fittingly, it was by far the weakest show I’ve ever seen them play. Granted, I was a bit distracted by the loud people around me near the back of the room as well as my own internal brain-buzzing, but they were just... off. It made me sad.

Is this a temporary thing or have I finally moved into that stage that most people do in their mid-20s? Where music is no longer an evolving, defining part of their identity, but rather a remnant of a fading youth? A kind of embarrassing rope onto which the aging pop culture dork clings, swinging precariously close to self-deluded obsolescence?

I mean, how many comic strips about the Clash can one man do?

Anne Hathaway is even younger than my girlfriend. Shame on you!

I don't know when Madonna turned into a dude, but it's totally true.