So, when did Easter become such a big deal? Maybe I’m missing something, but I don’t recall it being such an all-encompassing, homeward bound event.

I spent Easter Sunday mostly cleaning. Cleaned like a mother-effer. Cleaned for five hours. Scrubbed the floors, cleaned the bathroom, vacuumed every nook and cranny of the place, emptied and dusted shelves and their clutter, even polished up some dirty action figures (and I don’t mean this).

Actually, a half hour of that time was spent fixing my toilet seat, a feat of which I am far too proud. The awkward hardware that came with my clear blue Ikea toilet seat never worked quite right, the seat would slip around on the bowl, which can be a disconcerting event (especially for the guys, with them goodies down there waiting to be crushed and all). I removed the ridiculously long securing bolts and replaced them with a shorter screw, which threaded into the butterfly nut much more securely. I added a second washer and discarded the superfluous second plastic bracket. That seat ain’t going nowhere! I almost felt like a man. But then I went back to dusting.

Part of the reason was that I had some people over for an egg hunt. I hid 25 candy eggs (Cadbury, Snickers, Baby Ruth, Butterfinger) around my apartment, stocked the hooch, cut some veggies and cheese and picked out some springtime party music. I even got to use my new party lights strung around my fire escape (ah, the longing for a back yard).

It was a small gathering, and kind of a last minute event. Most people I know had Easter plans. I never have Easter plans. Easter has always been a non-holiday for me, at least since I stopped searching for baskets on Urban Drive. In fact, the picket fence purity of the holiday, the uniformity of its rituals, the fact that it’s far harder to separate it from its religious connotations (as opposed to Xmas, which is open to reinterpretation... well, I think so, anyway).... kinda freak me out. The perky families in their pastel finery with their flowers and bunnies, visiting Grandma and eating ham.... I have no kids, nor any pastel finery. I prefer dead flowers, don’t really like chocolate bunnies (hollow rip-offs, they), and all my grandparents are long dead. I just can’t relate.

I do like ham, though. Maybe next year I’ll just sit around and eat pork products all day. And Cadbury eggs. They’ve got a gooey center.
3 comments: 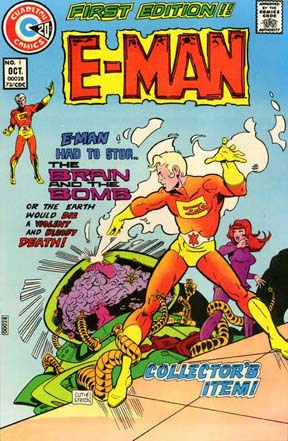 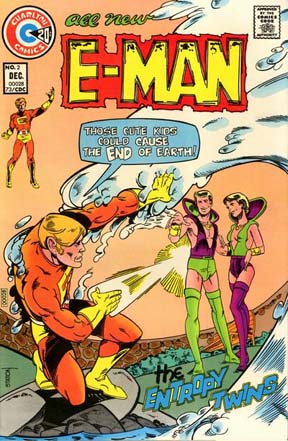 As a child of the 70s, I grew up primarily reading DC Comics, with Marvel coming in second, followed by some Archie and Harvey with a mere smattering of Gold Key, Fawcett and Charlton. There was just something that felt to me... substandard... about most of the smaller companies’ output, they didn’t have the four color wallop of DC and Marvel.

One big exception was Charlton’s E-MAN, a truly groovy superhero comic that premiered in 1973. Created by writer Nicola Cuti and artist Joe Staton, E-man was a parcel of pure energy that wandered the universe for thousands of years before settling on Earth, in a lightbulb in the dressing room of exotic dancer Nova Kane.

You heard me right. A superhero comic where the female lead was a buxom, red-headed stripper with the nom de plume of Nova Kane (her first line in #1: “It’s going to feel good to get into clothes”).

... Where was I? Oh, right. Anyway, the energy makes Nova smash the lightbulb with her high heel and upon release, takes human form (it can assume any form of energy or matter, which is convenient), fashioning an orange and yellow costume with Albert Einstein’s E=MC2 equation as his chest symbol (which musta’ been a pain to draw in every panel). E-Man’s chosen alter ego? Why, Alec Tronn, of course.

E-Man often played like a more cosmic Plastic Man, fashioning utilitarian tools from his limbs, battling otherworldly giant brains, underwater despots and omnipotent farmer’s daughters. It was a truly weird combination of sci-fi, superheroics and oh, yeah, sex. Implied, to be sure, but E-Man featured more sexuality than any other superhero comic of its time. In issue #2, Nova’s making toast while wearing jeans and an open purple vest... and that’s it. And yet the comics code approved!

In #8, an erupting underground sun (!?!) turned Nova into an energy being herself, and the comic lost something after that (it was cancelled two issues later, but had some revivals at different companies in the 80s and 90s). Still, coupled with some bizarre backup features like Killjoy by the batty Ayn Rand accolyte Steve Ditko, E-Man was a comic unlike any other in the 70s.