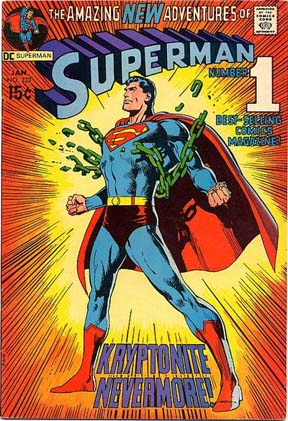 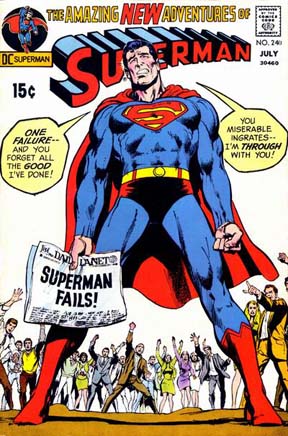 In honor of the first of my five part series on anticipating Superman Returns on mtv.com, here are two of my favorite Superman covers from the 70’s. In #233 (January, 1971), a chain reaction converted all Kryptonite on Earth into harmless metal (something that wouldn’t last). In #240 (July 1971), a weakened Superman finds the citizens of Metropolis turning on him. The mystic I-Ching (advisor to Wonder Woman, who was likewise going through a powerless period. So to speak) teaches Supes how to reover his missing strength.

The Superman comics of the early 1970s (mostly those written by Denny O’Neil and illustrated by Curt Swan and Murphy Anderson) may well be my favorite comics of all time, and the powerful covers by Neal Adams left an impact on me that will never fade.

POSTSCRIPTED BEAUTIES, JUNE 2013
Well, it's seven years later, and here we go again. While SUPERMAN RETURNS didn't exactly pan out as I (or Warner Bros.) had hoped, expectations seem a bit higher for this weekend's debut of MAN OF STEEL. I'm trying to keep my hopes mitigated, as I don't wanna be burned again. But in the meantime, here are a dozen more awesome SUPERMAN comic covers from the Bronze Age.

Those are some beautiful covers. #233 has to be one of the best comic covers ever.

I imagine you're geeked beyond all reckoning. Trailer 2 looks GREAT.

The original SR teaser trailer had me kind of ambivalent. But the new trailer... yeah.... I've now officially moved from the "cautiously optimistic" category into "as excited as I can allow myself to be." So, we'll see.