I had to buy a new cell phone yesterday. Dammit. My “old” one (a year and three months) died. I usually dread having to upgrade any technology (buying the big LCD HDTV an exception to the rule). I can’t stand the built-in obsolescence of things like computers and cell phones. And even worse, as the technology grows and “improves,” my less-is-more esthetic finds a colder and colder world. I don’t like bells and whistles on everything. I just want a phone. I just want to be able to call people... okay and text them.

Actually, I prefer texting to calling. I hate talking on the phone. Plus, texting has the great anachronistic pull of letter writing, even if it is in brief sentences (for this reason, e-mailing is my preferred method of communication).

To that end, however, I refuse to use most txt shorthand. I will write “before,” instead of “B4,” I’ll spell out the variations on “to” and only use “2” in a numerical context. But for some reason, I have no compunction using “yr” for “your / you’re” (no distinction, which does grate the grammarian in me); “txt” for “text”; and “u” for “you.” But those are the only txt shorthands that I’ll use.
And I never, ever use emoticons. I’ll write out “wink, wink” before I’ll type ;-).

Anyway. My new phone. It’s a Razr (or I should say, “Razor”). It has a camera. I can AIM. Play games. Download video and songs. None of which I shall do. The only new feature I may warm up to is the camera. We’ll see. 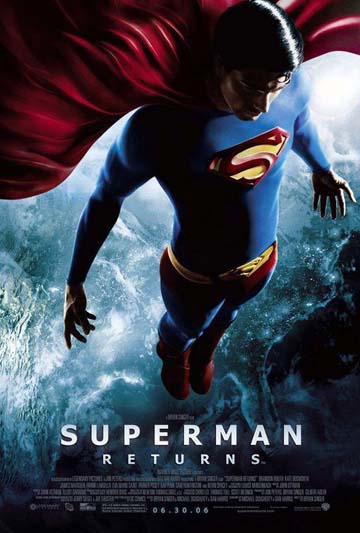 In other news, the final one-sheet for Superman Returns was released this week. And I gotta say, much as I’ve disliked most of the movie’s art direction so far, it’s pretty nice. It’s big and iconic, the maroon even looks more red and amazingly, Superman’s hair is black in the poster and parted on the correct side ( sadly not the case in the film). Yes, I am kryptonitpicking. It’s a term I invented. Feel free to spread it.


And finally, every morning, when my alarm goes off at 9am, I roll over and turn on CNN. Yeah, it’s often obtuse and pandering, but there is some news peppered in there and my annoyance with O’Briens Miles and Soledad usually propels me out of bed and into the shower before the Daily Show comes on.

This week, they're running a series this week called "30s-40s-50s" about where you should be and what you should be doing at these stages of your life. Of course, I can relate to none of it as it's all geared towards people following THE PLAN, as I like to call it. According to this series, I should be married, have kids, a mortgage and a corporate career. Oh, and no life, apparently. Much of the talk revolves around basically (and of course, I'm paraphrasing) being MISERABLE! Coping with no free time, awful crippling debt, strained relationship with your spouse, bratty kids, and a job you hate.... NONE of which apply to me. I've got lots of free time, no debt at all (aside from my car), I’m happily single with no bratty kids and I like my jobs.

Gee, did you know it’s bad to have a lot of credit card debt and live beyond your means? That you’re supposed to limit the amount of saturated fat you eat and get lots of exercise? That you should sleep? That it’s better to own than to rent? Now THAT’S news!!! Way to go, CNN! You’ve finally become as fully vapid as the Today Show!