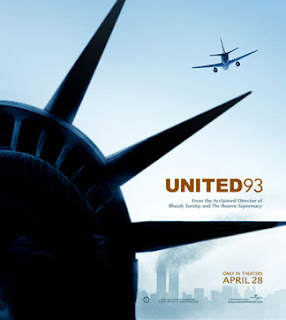 A lot to cover today. I’ve been quite busy, so let’s get caught up.

So, this is embarrassing to admit, but... I saw United 93. As someone who writes about movies for part of his living, I feel obligated to see certain buzz films, to be able to be a part of the discussion. But honestly, I might’ve seen it anyway. My relationship with 9/11 is much like my father’s with WWII. I can’t turn my eyes away from anything about the day, mostly because even though I saw it first hand (living right across the Hudson from NYC), I still can’t wrap my brains around it.


So I went to see United 93. Alone (again, naturally), on a Monday afternoon at a grand old movie theater in New York’s east village. But as I approached the sidewalk box office, I felt my stomach knot a bit. I whispered my order and averted my eyes when I gave the ticket to the usher. Buying snacks felt more than inappropriate, so I passed. I sat in the front row of the balcony, the theater sparsely populated, many people likewise there for a solitary experience.

More discomfort followed as the pre-show advertainment got under way. A particularly nauseating Pepsi spot featuring Jimmy Fallon and Parker Posey swigging the swill and dancing down a New York street (“It’s all about the cola”) was followed by a “funny” dancing concession / turn off yer pagers (showing its age) spot. The forced faux-humor of these ads felt even more crass in light of what we all knew was to follow.

My first thought as the movie got underway was “Ouch, that’s some bad acting.” Of course, that’s because they weren’t actors. Many of the actual air traffic controllers and other involved parties played themselves in the movie. Uh... okay. Even Unsolved Mysteries didn’t let actual participants play themselves. Seems odd to me.

United 93 tells us nothing about the day or the people that we didn’t know already. Much of what’s depicted on the plane is, of course, pure speculation. A particularly offensive bit involving a blonde foreigner (British? French? I couldn’t tell) who is against the plan to take back the plane and attempts to warn the terrorists smacks of xenophobia.

And so we just sit, waiting to see the passengers attack (and kill?) the terrorists. Which happens in the last minutes of the movie, just before the plane crashes. The movie wants us to feel some sort of cathartic release in seeing Americans fight back and defeat (sort of) these members of al-Qaeda. And then the plane crashes. And the movie’s over. And we all just feel awful.

But don’t we still all feel awful anyway? To this day, almost five years later, I still wince every single time I hear a low flying plane. The fact that our administration has exploited the events of September 11th, 2001 to further its own unrelated agenda (and continues to date-drop it at every opportunity) only adds to the tragedy of that day.

Maybe United 93 isn’t for people in New York or Pennsylvania or Washington DC, for whom 9/11 didn’t look “just like a movie.” I can’t help but feel that, rather than giving weight to the sacrifice of the people who died on that flight, United 93 trivializes it (and I’m not even getting into the theory that the flight was actually shot down).

There are stories to be told. If the filmmakers would've chosen to tell the stories of one of the passengers, a pilot and/or a flight attendant, let us know WHO they were rather than just nameless faces in the crowd, I might've felt something deeper.

Tonight I’m seeing The Devil and Daniel Johnston (NOT alone) and expect a better experience. 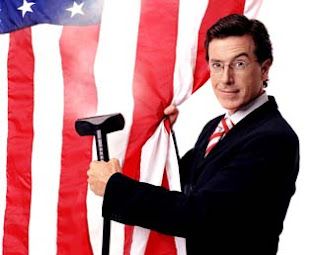 In other news, you may have seen that “hilarious” George Bush impersonator side by side with the Prez at the White House Correspondents’ Dinner over the weekend. But that’s not the real story. The mainstream media practically ignored Stephen Colbert’s appearance following that powderpuff act. Go to YouTube to watch the whole thing. It’s probably the closest Bush has ever gotten to truly being read the riot act in public. Pure genius. I confess to being skeptical when The Colbert Report debuted as to whether or not the joke wouldn't wear thin. The show (and Colbert) just keeps getting better and better. Now, how long until Mark Smith, the man who booked Colbert for the dinner is fired?


Finally, maybe you’ve seen that commercial for the Suzuki Forenza where a woman sheds her corporate clothing in a wage-slave-packed elevator and changes into athletic gear, running out the door of the office building to jump into the waiting bland-sedan and rush off for a liberating weekend of mountain biking, with the tag line, “You want more out of life?”

Not that almost all advertising isn’t worthy of derision (Wes Anderson’s Amex ad aside), but this commercial makes me ill. It implies that this woman is an uninhibited free spirit who’s not shackled by her high-paying corporate career.

She IS shackled by her job. You want more out of life? Then QUIT your stupid corporate job that apparently allows you so little time for your own life that you have to strip in front of drooling suits and rush to squeeze in your precious weekend. I cannot stand the mentality in this country that you don’t have to love what you do for a living, that it’s merely a means to an end of making lots of money that you won’t really be able to enjoy until you’re too old to enjoy it. Your life is your own. RIGHT NOW. Not when you’re 65. It is entirely possible to live a full, rewarding, and yes, fruitful life outside of the fucking PLAN.