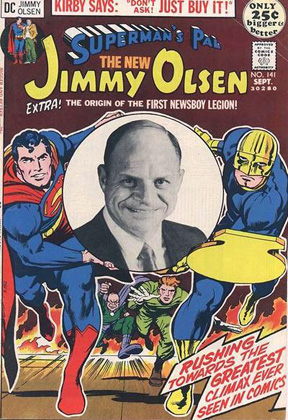 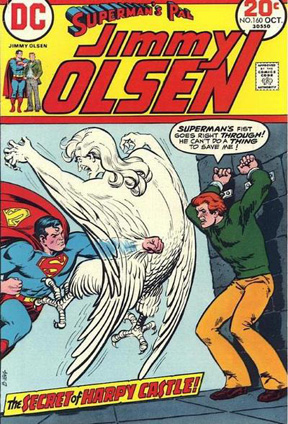 Anyway, beginning in 1954, SUPERMAN’S PAL, JIMMY OLSEN was the first comic book to star a non-super powered sidekick (Batman’s butler Alfred did have some solo adventures, but never got his own book). Although Jimmy did sometimes gain elasticity ala Plastic Man and fight crime as Elastic Lad (in a dull costume that actually spelled out his name on the chest), and sometimes teamed with Superman in the Batman and Robin-esque duo of Nightwing and Flamebirdin the bottle city of Kandor. Oh, and he was once Giant Turtle Boy.

Here are two swell Jimmy covers from very different interpretations in the 1970s. JIMMY OLSEN #141 (Sept., 1971) came during Jack Kirby’s run on the book, a time when the King was bringing some mind-blowing psychedelic concepts to traditionally stodgy DC. Jimmy’s adventures were integrated into Kirby’s so-called “Fourth World,” series surrounding the battle between Darkseid’s Apokolips and the New Gods’ world of New Genesis. Kirby’s twisted imagination was given mostly free reign (even if DC had more traditional house-styled artists like Curt Swan “fix” his Superman faces and S-shields), which included using Don Rickles as a guest star. The cover features pencils by Kirby and inks by Neal Adams, the comic book equivalent of a collaboration between Van Gogh and Gauguin.


When Kirby left the book, it reverted to more standard fare, transforming Jimmy into “Mr. Action,” a hip, scrappy investigative reporter who still usually needed Supes to haul his butt out of the fire. JO #160 (Oct., 1973) sports a cover by Nick Cardy, an artist I didn’t fully appreciate as a child, but have grown to worship.

Actually it was Murphy Anderson who touched up Kirby's drawings of Superman's face in Jimmy Olsen, but considering how closely he worked with Swan around the early 70s, I can see how you would confuse the too.