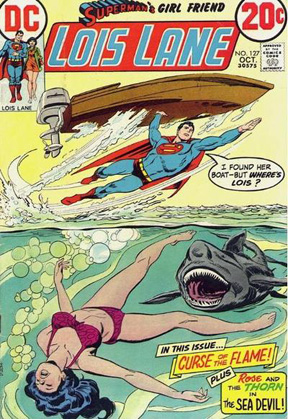 Inside the Superman Fanboy Dilemma Part 5 is up on mtv.com, the final installment of my supremely geeky gushing over the Man of Steel. So, here's our final Bronze Beauties Superman installment (for now).

Superman's Girl Friend Lois Lane was a pretty silly comic book, a strange amalgam of superhero, romance and comedy (Note the separation of the words "Girl" and "Friend," giving Kal-El a bit of space. "Hey, she's a girl and she's my friend, she's not my girlfriend!"). From its start in 1958 through the mid-60s, it was an endless stream of tales about the girl reporter either trying to lure the Man of Steel into marriage or replace him with some other unattainable man (a millionaire, an alien, Satan, or worse, some other superhero!!!). In the late ‘60s, Lois got a bit more liberated, socially conscious (as in the classic 1970 tale, “I Am Curious (Black)!”) and independent, although she never really quit trying to bag the last son of Krypton. Guess she never thought of getting knocked up by him....(or did she?)! 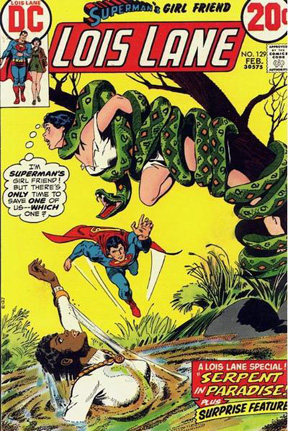 Here are two great 70s covers to Lois Lane even though they both defy Super-logic. #127 (Oct. 1972) features a bikini clad Lois about to be, uh, eaten by a great white shark, and Superman can't find her? LOOK DOWN, SUPES! #129 (Feb., 1973) has a serpentine twist on the old bondage cover theme, although it really seems as if Superman WOULD have time to save both women. Art by one of the great underrated cartoonists of all time, Bob Oksner.