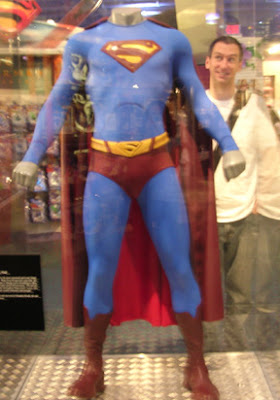 With Superman Returns now just two weeks away, I’m in trouble. My “cautious optimism” has given way to being geeked like I’m twelve years old again. Early reviews have been mostly glowing and I’ve yet to see one clip that made me wince. The atrocious X-Men: The Last Stand only hammered home how great a director Bryan Singer is, and I’ve even come to not mind the costume so much.

Part of that has to do with seeing it “in person.” Yesterday, Lysa and I made a trek (okay, a pilgrimage) to the Times Square Toys-R-Us to check out their massive Superman Returns display, featuring actual movie props including some kryptonite, one of Jor-El’s crystals (covered with fingerprints, incidentally) and mostly, one of Brandon Routh’s Superman costumes.


The red looks brighter, the texture works and the shortie shorts don’t seem so Speedo-ey. We took a bunch of pictures, did some toy shoppin’ and then headed uptown to see Poseidon in IMAX, primarily to scope out the Superman Returns trailer in that enormous format. I was disappointed that it was the teaser trailer, but it did look fairly amazing (Poseidon blew, but that’s beside the point). 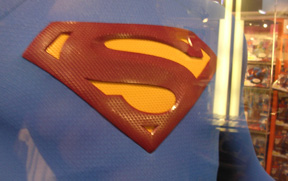 As of now, there’s a group of ten of us going to see Superman Returns on June 28th. I decided that for this gathering, a regular theater might be preferable to the almost overwhelming IMAX, mostly because the odds that all ten of us will be able to get optimum seating together are not good. I mean, with the ability to pre-buy tickets, there’s no need to line up hours early to ensure entrance, but I’d still like to get there early enough to not be in the first, or, worst, LAST row.

I know, I know, this is all rather silly. I’m a 41 year old man getting all excited about going to see a superhero movie with his friends. Whattyagonnado. 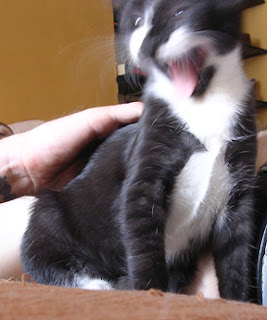 Meanwhile, my new kitty, General Zod (just edging out Herbert H. Heebert for the winning appelation) is almost too good to be true. He and Monkey get along tremendously. There was exactly ONE hiss (from Monkey) before they started playing together. Zod (already nicknamed “GeeZee” since I find pet names work best with two syllables) found the litter box right away. He slept curled up next to me on the third night. When I had some people over Sunday night, he didn’t hide at all. ui======
‘’’’’’’’’’’’’’’’’’’’’
And, as witness above, he types.

Oh, sure, he is a kitten, meaning he’s scratching on the couch and playing with loud rolly things at 4am and chewing on electrical wires and getting stuck in tiny spaces, but these things shall pass. He even got drunk by lapping out of a glass of wine the other day (I didn’t see him until he’d had some swigs), making him truly a cat of mine.

I know, I know, I’m a total honking hypocrite, being one of those annoying fucks who talks about his "baby" as if you care. But c’mon.... cats rule. People suck.

Well, most of us. A few of you are pretty swell.

Hello, Zod? I think Mom's gonna change my name again, so I gotta make this quick. I know how we can finally take over the entire universe. Don't tell Monkey. Let me know if you're interested. Love, Khan.