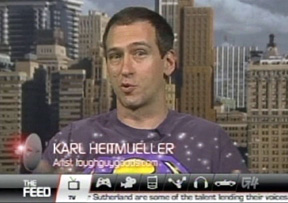 I may have entered an entirely new realm of geekdom yesterday. I appeared on the G4 network’s ATTACK OF THE SHOW in a Crossfire-esque segment called “the Loop” (sposored by Yaris). The debate was what was referred to as an age old comic book battle, “Batman vs. Superman.” Which I, to be honest, don’t think is much of a battle, for numerous reasons, which I won’t get into here (I think I've crammed enough Superman down your collective throats for a while... so to speak).

My pal, cartoonist Bob Fingerman (who couldn’t care less about superheroes) recommended me for the gig and was the “creamy nougat center of neutrality” in the debate, at least until his feed went dead and I was left alone with the Batvocate. (As a side note, Bob was happy that he got to plug his upcoming book, Recess Pieces, and that he was not referred to as a “comic book expert.”)

Whether the debate was won or lost is a matter of opinion. Some have told me that I mopped the floor with the guy.

Okay, so I mopped the floor with the guy. But it’s not his fault. Maxim Magazine associate editor Jon Wilde, as we discovered while chatting in the green room before the show, isn’t even a comic book fan. He was a late replacement for author Scott Beatty, who has written numerous books about Batman (as well as Superman, to be honest). That probably would’ve been a more fair fight. 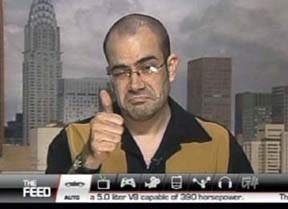 But I still woulda’ won.

Sequestered alone in a room at a Manhattan studio (Bob and Jon were in different rooms at the same place), I wasn’t sure at all how I was doing while the LIVE broadcast was occurring (gulp). It wasn’t until I got home late last night that I watched the DVR of the show and was stunned that I wasn’t mortified... at ALL... by the whole thing. Even I thought I came off okay.... within context, of course. I mean, Giant Nerd in a Bizarro Superman T-shirt, yes. But somewhat eloquent and funny, I think.

I was even called the nerdiest thing she’d ever seen by show co-host Blair Butler, the hottest comic book dork on Earth, a woman whose existence I only discovered last weekend. Oh, Blair... and we could’ve made such geekiful music together!

The funny thing is, my fanboy seems to be rising again. While there was a period some time back where I was losing interest in keeping up with the medium, that’s changed again recently. No doubt Superman Returns (box office dud that it is.... sigh) has something to do with it, but I think it has more to do with retreating into my own Fortress of Solitude. And I’m feeling more solitary than I ever have in my life (note: this is not a BAD thing).

But whenever I’m feeling overly disconnected from people, my geek level goes up. I know I’m not alone, it’s one of the main reasons why so many comic book / sci fi dorks fit into the stereotype of schlubby, tubby guy with no social skills. It’s not the chicken and the egg: The physicality begat the nerd. When you don’t fit in with so-called “normal” society, when you don’t get invited to the dance, you need to find other things to fill your time. And fantasy worlds where freaks possess incredible powers and justice prevails suddenly become very appealing places in which to retreat.

There are exceptions to the comic book guy stereotype, of course, and I don’t mean myself (see: Blair Butler again). The thing is, as easy as it is to deride the comic book nerd, in many ways, they’re actually cooler than, say, your average rockabilly dude. The rockabilly guy’s entire life revolves around being COOL, crafting a carefully calculated (but completely unoriginal) style that applies to everything from his outfit (jeans, black boots, tattoos, white T-shirt, chain, yawn) to his car to his music to his girlfriend. It’s all about how other people perceive him. And I’m sorry, but anyone who tries THAT FUCKING HARD to be cool.... isn’t.

The comic book nerd, on the other hand, is truly passionate about his world. He dresses for comfort, not style. His tattoos are usually pretty bad. His hair is sparse and unkempt and he doesn’t care. His hygiene can be in question. And his girlfriend... well, if she exists, she usually resembles, well... him. But, again.... HE DOESN’T CARE. He’s happy in his world and if you don’t like it, tough shit. So, in the larger sense, who’s more like Brando in The Wild One?

That may not fit into the typical notion of “cool,” but to me, the overweight schlub in the Hulk T-shirt is usually far hipper than the James Dean wannabe.

You're my hero. Seriously!

Bob Fingerman looked so sexy and confident I think he was taken off the air for being too wonderful for words.

At least Clark Kent works for a living!

Just wanted to say as the guy you mopped the floor with, I'm okay with being used as a mop by you. Pleasure meeting you, and if we cross paths again, hopefully the topic of discussion won't leave me so stranded that I clutch onto the word "badass" like some sort of linguistic life preserver.

Ha! You're a classy guy, buckwilde!