I may be a pop culture dork, but as a rule, I despise the cult of celebrity. I don’t read any People / Us / Star style mags (although there’s a thin line between them and Entertainment Weekly, to which I’ve subscribed for over a decade), I don’t watch TV shows about entertainment “news,” I could care less about the private lives of the stars. I hate the fact that I know the names of movie star offspring and who Kevin Federline is.

Now, having said that, I do admit that I am fascinated by Lindsay Lohan.

She’s my favorite train wreck, but it’s not a strict case of schadenfreude (as with, say Britney Spears, who’s simply a lucky hillbilly idiot with no sense of perspective as to her success in relation to her talent and whose inevitable career decline I await droolingly). I used to like Lindsay Lohan. Part of me still does.

A number of years back, I thought that, in stark contrast with most young Hollywood pretzel sticks, she had a darker, kinda punk sensibility, she came across as a bit smarter than your Hilary Duffs, your Emmy Rossums. I thought she was great in Freaky Friday and Mean Girls (which I only saw on cable, mind you) .

And, I have to admit, at the risk of sounding like a creepy Chester, I thought she was hot. Yes, yes, I know, I’m old enough to be her father. Hey, so is Brett Ratner! And at least Lindsay has (or HAD) some curves on her (how anyone can lust after the Olsen Twins is completely beyond comprehension) and besides, it wouldn’t...um...

Where was I? Oh, yeah, Lindsay seemed to have her shit together.

But as Lindsay’s star rose and she hit her 18th birthday, she seemed to fall prey to all of those dangers of young Hollywood stardom. Suddenly she was hanging out at the hot spots, partying with yukky humans like Tara Reid and Paris Hilton and then she lost all that weight and dyed her hair blonde and began stalking cheezy directors and trashing better actresses on bathroom walls and Oh, Lindsay.

Of course, Lindsay Lohan is certainly not the first victim of the lure of excess that someone in her position in Hollywood is afforded. It’s actually strange when someone thrust into the pop culture spotlight at a young age DOESN’T put much of their paycheck up their nose (or some other orifice).

One of the things I find most fascinating is that in all of these stories about her already legendary clubbing, not one of them mentions the fact that SHE’S NOT OLD ENOUGH TO LEGALLY DRINK. I really hate the fact that celebrities rule the world (or at least America) to the point where the laws don’t apply.

Seriously, if Lindsay Lohan (or Amanda Bynes or Mischa Barton or any other underage ingénue) ever came into my bar and ordered a drink, I’d ask for their ID and then say “Sorry” when they annoyedly asked if I knew Who They Were. Fuck that. I would sooner lose my job than perpetuate the VIP status of these prima donnas.

But I know that I am in the minority. Most bars love the status of the celebrity hang. Hell, they usually don’t even charge the stars. The most overpaid people on Earth get the most stuff for free. How does that happen? Such is the wattage of fame.

Which brings us back to Lindsay. What makes me care (just a whit and within context) about this bizarre path of personal and career destruction she’s so publicly trudging down is that I really thought she coulda’ been a contender. And maybe the damage isn’t permanent. Maybe she’ll snap out of it and get back on the right track, baby. 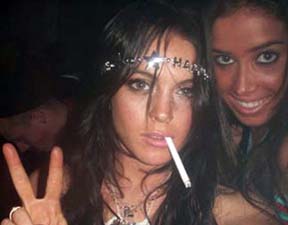 she does have nice buns.