I’ve been having a hard time trying to figure out what stickers to put on my laptop. I know, life is a trial, right? But here’s the thing; There are only three places where a person should seriously consider their choice of ornamental adornment before casually slapping something on: (1) Their Body. (2) Their Vehicle. (3) Their Laptop Computer.

Unlike say, a notebook or a backpack, those three canvases are (or should be) considered declarations of who you ARE and not just an advocation of a passing fancy. There’s nothing more risible than someone walking into a tattoo parlor with no idea of what design they want. Tattoos for their own sake really are stupid. You’re permanently marking your body, if you just want something “cool” as simple adornment, then go get a henna job or just stick to T-shirts of whatever lame contemporary punk band you like.

A tattoo should be a statement about yourself, a visual personality résumé (at least the bullet points). And if you’re getting one, it should show. Business tattoos (ones that can remain hidden at the bearer’s corporate day job) can make you look like nothing more than a weekend warrior. Neck tattoos, however, remain a bad idea. And ladies, keep the needles away from the toes… it just looks white trash.

While certainly not as indelible as a tattoo, the statement made by a car bumper sticker is something the driver cannot deny, much like exiting a public restroom that the person before you stunk up (as any Democrat who’s ever borrowed a car from a Born Again Christian Republican NRA member knows [unlikely as that scenario may be]). If you take a stand on an issue via the permanent bumper sticker, you probably stand firm (removable, faddish magnetic ribbons are another, completely stupid matter). Proclaiming one’s beliefs on a vehicle is a ballsy move, though. You run the risk of vandalism from the opposing side. No doubt many Pro-Choice Hondas have been keyed by those pillars of hypocrisy known as the Right to Lifers. My car is currently (aside from a few glow in the dark stars) sticker-free, but if I come across one of those “mean people suck” stickers, I might just buy one and put it on there… after cutting off the word “mean,” of course. 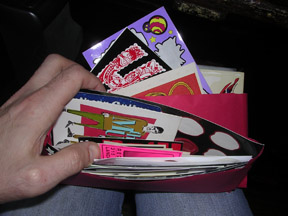 So, my laptop. I’ve had it for almost two months now, and until last week, the only decoration it held were those ubiquitous GID stars and similarly glowing letters spelling out the name of one of the pages on this website. I went through my envelope of stickers (every adult should have one) at least a dozen times, repeatedly considering a handful, but never fully committing to them.

Like the political bumper sticker on a car, the sticker of a band on your laptop is a sign that you REALLY love this band. I have a lovely sparkly Southern Culture on the Skids sticker from their album Plastic Seat Sweat, but am I THAT much of a SCOTS fan in 2006? There’s that cool Ed Fotheringham sticker from The Muffs’ best album, Blonder and Blonder, and that one may still make the cut. The Matt Pond PA sticker would be on there if it weren’t so damn ugly. The Liz Phair sticker from Whitechocolatespaceegg? Sure, that record was great, but she is so unredeemably awful in her current sellout incarnation that I don’t wanna be guilty by association.

As for my own self-designed TOUGH GUY stickers (of which there are two), at first I just felt… too narcissistic putting them on. Besides, they’re like three years old now, I’m just sick of looking at ‘em. But, perhaps out of resignation, last week I gave up and applied the TG Blinky sticker on the left side of the front of my MacBook. And then I added a small, Bruce Timm-drawn Superman next to the glowing Apple icon. Then I tossed on a few more glow-stars. Then, exhausted, I took a break. 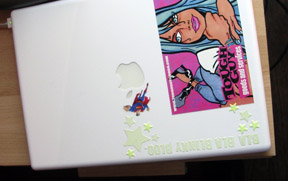 Glow in the dark stars. My own artwork. And Superman. That’s about right. For now, anyway. I've got more space.

In other, less Earth-shaking news, the Fall Tee Vee season is under way and my DVR queue is chockablock… AMERICA’S NEXT TOP MODEL (Caridee is my prediction), NIP/TUCK (which qualifies as a guilty pleasure), GILMORE GIRLS (Amy is already missed… Chachi? Seriously? That’s the best you can do?). REAL TIME WITH BILL MAHER (Go, Atheist, Go!). SMALLVILLE (Green Arrow? Without the facial hair?). HEROES (for now, anyway). THE VENTURE BROS. (Sheer brilliance). MY NAME IS EARL (my favorite new show in years). THE OFFICE (Get over it, Anglophiles). And, of course, the ever more essential THE DAILY SHOW and THE COLBERT REPORT (which I consider one show divided into two parts, really). Ah, glorious television… warm, comforting, brain-cell-fucking Tee-Vee… my love for YOU will never die.

my landlord has a bumper sticker that says "jesus loves a hummer" ... which i think would be funnier and irrevelanter on your laptop (!)