Sometimes I feel guilty about the fact that this website is rarely political. True, it started out as my online portfolio and catalogue back when Tough Guy was created as something else (if you missed that rather self-flagellating post, it’s long deleted, sorry). As writing has replaced art as my main focus, TG has changed to reflect that. And yet, you’re far more likely to read an impassioned rant about the animated adventures of the DC Universe than a dissertation on Darfur. I’m a pop culture pundit, not a political one. It’s not that I’m not involved or don’t care about more serious matters. I just don’t feel overly qualified to talk about them, unlike my pal Dave. But I get so frustrated and angry at how damn stupid this administration both IS and thinks WE are to buy into its myriad lies and reprehensible scare tactics. But then again, that is how W got re-elected two years ago, so maybe they’re not so stupid after all. 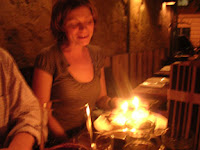 Last night a group of us convened at In Vino, a spectacular wine bar in the east village to celebrate Gretchen’s birthday. Four hours and $500 later, we left, buzzed on both incredible food and wine and the even headier intoxicants of camaraderie and friendship.

It was just before midnight when we separated and I put in my iPod earbuds, continuing the Matt Pond PA marathon that I’d started when I left my apartment that afternoon. It was a beautiful evening in Manhattan, crisp and cool with a purple, cloudy sky lit up by the moon. And suddenly, it was September 11th, five years later.

I continued walking to the PATH train at 9th and Sixth Avenue, drunkenly taking in the feel of night in Manhattan. When I got back to Hoboken, I walked along the river, gazing at the breathtaking view of this city that I love so much. Gentrified, corporatized, yes, but still New York, still a city of people from all over the world who realize the importance of culture and community. A city of extremes, beautiful / ugly, rich / poor, pious / godless, sophisticated / trashy, nearly every kind of person there is, all rubbing shoulders with each other, interacting with and affecting each other in a microcosm unlike any other place.

I constantly hear hipsters lamenting the decline of New York, that it isn’t what it used to be, that the real artists have left and the real scenes are long dead. Boo Hoo, poor aging hipsters. So CBGB is moving to Vegas, what a beautiful metaphor for the state of Punk. I got news for you, Spike, things change. Maybe there are fewer venues for good live music in New York, but there are also fewer young people who give a shit, so there you go. I dare you to name a more vibrant place on Earth. 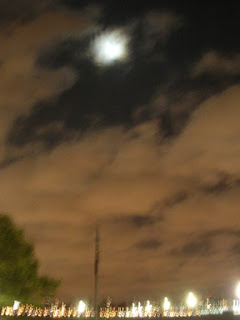 9/11 hurt and hurts more than almost anything I’ve experienced (and I was lucky enough to not lose anyone I knew directly). For those of us who saw it first hand, without the numbing filter of TV and the calming drone of pontificating talking heads, it was surreal and unifying in a way we can’t even describe. If this comes across as hubris on the part of New Yorkers (and those of us in northeastern New Jersey who border the Hudson River), then so be it. I’m not trying to say that the events of that day didn’t affect everyone in the country and the world… they did. I’m not trying to imply that our suffering makes us somehow better. It’s just… different.

But what hurts more now is how the very real tragedy seems to have taught us nothing, that we were unified for a mere heartbeat, that so many people either forgave or forgot that our fearless leader failed in his promise to get “the folks” who perpetrated the attack, that he used it as an excuse to go to a wholly unconnected war in Iraq and that he and his party have abused 9/11 as fear-mongering political fodder. "Patriot Day," my ass. I despise this truly evil administration as much as I adore this city. That’s a lot.


Next up: My thoughts on Heath Ledger as the Joker!! Sigh.