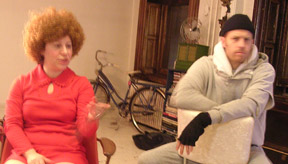 So, last week, I realized that I love Halloween in theory… but loathe it in practice. The problem is, 90% of all costumes just show how completely dull and original most people are. Working in a bar, I saw way too many “sexy” cats/nurses/nuns, etc. (I even saw a sexy PLUMBER), too many dudes just wearing stuff they found in their closet that didn’t match and waaaay too many girls wearing ‘80s clothes. I honestly don’t think I saw one decent costume the entire weekend at the bar. Granted, my place of employ is not a typical Party Bar, we didn’t have any special Halloween promotion or anything, but I doubt too much smart masquerading was going on in my mile square. 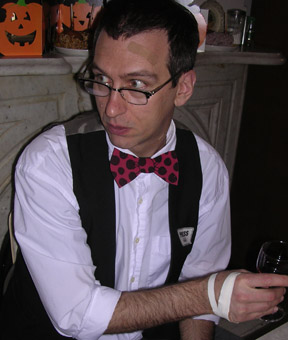 I’m not a fan of costume parties. Part of it is that I don’t like to dress to call attention to myself (my entire wardrobe is lacking in any bright colors). But in the context of a costume party, I’m not sure what’s worse… showing up with no costume or in lame costume.

But a costume doesn’t have to be elaborate... just clever. Subtle costumes that can take a while to figure out are often the best ones at the party, and almost always preferable to something just picked up at Party City.

Last year, I was peer-pressured into wearing a costume to work, something I was not happy about. So I went simple. I got a gray old lady wig, a glow in the dark plastic butcher knife and wore a crisp white button down with them (a sacrifice, as any bartender will tell you). I was supposed to be Norman Bates in mid-transvestite mode. A few people got it, some others didn’t. But it worked for me. 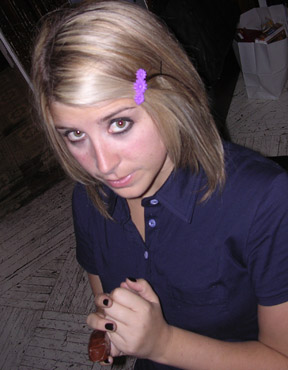 This year, I was invited to a party at my pal Haven’s and didn’t want to be the only wet blanket sans costume. But I still wasn’t keen on going overboard. So I made a red bow tie out of cardboard, wore a white shirt with a vest and my reading glasses and plastered a handful of band-aids on my face and hands. It’s an old reference, to be sure, so to help people out, I also made a press pass and even put “WKRP” on it. It was not the best costume at the party (but it was not the worst, either).

The lovely and vivacious Iloire had the best costume, a home-made Margot Tenenbaum, complete with “Four Plays” book and wooden finger. Gary’s simple, yet hilarious Rocky Balboa costume served him well throughout the week and Haven’s Annie was disturbingly perfect.


And not a sexy cat nor pregnant nun to be seen. Sheesh.
2 comments: 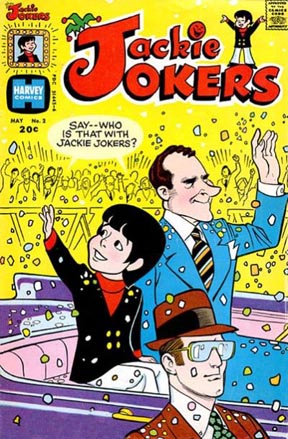 I read my fair share of Harvey Comics in the 70s: Casper, Hot Stuff, Spooky, the various Littles (Dot, Audrey, Lotta, et al), Sad Sack and Richie Rich were as pivotal to my early reading as superhero comics were. But maybe my favorite Harvey Comic was the bizarre, short-lived Jackie Jokers, a book about a vaudeville-style young comedian (no, it was not a period piece). Jackie was part of a successful showbiz family (including uncles and cousins), but somehow he lived in the typical Harvey suburbia instead of Los Angeles or New York City. But the weirdest thing about Jackie Jokers was that, despite being drawn as a little kid like Richie Rich, his exploits were decidedly adult, and many stories revolved around him trying to land grown-up roles in films. Also, his relationship with his girlfriend Candy seemed a bit less innocent than, say, Casper and Wendy’s.

Anyway. Jackie Jokers only lasted 4 issues in 1973, but Jackie teamed with the richest kid in the world for a far more successful 48-issue run in Richie Rich and Jackie Jokers. But that book wasn’t nearly as off-kilter as Jackie’s solo comic (aided primarily by outstanding art by Ernie Colón at the peak of his abilities). I mean, come on…. How many other comic book characters shared a COVER with Richard Nixon?!??!