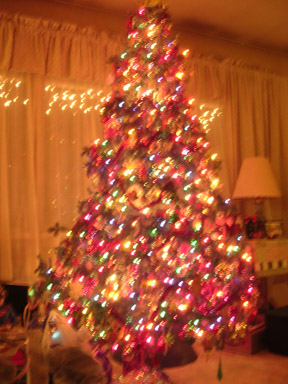 My annual Post-Christmas Depression has set in, but with a slightly different feel this year. Usually it occurs because the holiday has failed to live up to my always-unrealistic expectations. This year, however, Christmas was merrier and brighter than it’s been in many years. Almost everything went well. The Video Party was a big success, my shopping for gifts went smoothly (and more importantly, was appreciated), there were some really special times spent with really special people. My trek back to PA was remarkably free of any anxiety or agitation (not one fight with the nuke!). I got to see some friends I haven’t seen in a long time (although the ones I missed were sorely missed). The ever-declining Fulton Bar was replaced with the far more enjoyable Quips Pub and there was a too-brief encounter with the Winger Wine Cellar. We got some great new stories that will be told for years (“I’m 69 but I feel 18 because I got Jesus in me~!”). My cousin Gretchen’s absence was palpable, but it was great to have Gary there. I got to see, hear and smell the 1800 starting up for the first time in decades. The fireplace raged despite the too-warm weather. The kind woman at the CVS gave me $20 off the memory card I suddenly needed on the 25th. I received a gift of the heirloom Christmas glasses! The rest of my pile of swag entices me to ignore work and just read, watch and listen for days and days. In fact, the entire holiday, the only real drag was the fact that Global Warming makes it seem as if the concept of a White Christmas is really going to be an anachronism found only in old recordings.

So why so glum?

Because this year I could FEEL the impending inevitability of time. A number of losses among extended family and friends this past year (yet another of which I just found out about while writing this entry!) hammered this home. And as I’ve said before, with no families of our own, my brother and I cling to our (countless) beloved holiday traditions tenaciously. But the day will come when they are going to be forced to change, and Christmas will never be the same. That’s the natural order of things, but I honestly don’t know if we’ll be able to deal with it. When friends of mine talk about NOT going home for the holidays or make comments about how it’s not a big deal in their family (or, worst of all, express outright cynicism towards Xmas), I’m frankly dumbfounded. I can’t imagine NOT having the enormous celebration of family and friendship (Jesus ain’t always the reason for the season) that we have every December.

I tend to be pretty self-absorbed (says the guy writing a blog, presuming people give a crap about his thoughts and tales). I can be petty and whiny and materialistic and impatient. But amidst that, I think I do have a sense of perspective. Over the past several years, the main thing I’ve learned is to not take what I do have for granted. Which made this Christmas both wonderful and heartbreaking.

And now comes the Hell that is New Year’s. Stay tuned.
No comments:

Names Withheld (but easy to figure out) 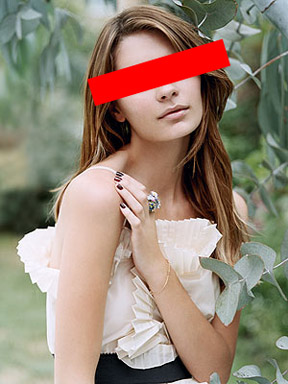 Santa came early this year. Last night at the bar, I got to fulfill one of my bartender fantasies (as mentioned in this posting)… I got to tell an underage celebrity that she couldn’t have a drink. I’m not going to say which one, but she’s a TV “star” on one of those shows with all the pretty young people having difficulties while wearing bathing suits (and she was mentioned hypothetically in that very post).

She was there with an absolutely awful band from L.A. who personify everything wrong with L.A. bands… completely obsessed with image, artlessly aping classic rock riffs and bringing nothing new to the table. The lead singer even took off his shirt (trust me, it wasn't hot). They blew, but not as much as the following band, a concoction fronted by some guy from Rock Star Supernova, a show which I had heard of, but never seen. Apparently it’s American Idol with “rock” pretense, but this guy seemed every bit as vacuous as any Idol contestant.

It’s always interesting to see the crowd that comes out for a band that sprang from the Tee-Vee. One of the craziest nights at the bar ever was when the band Flickerstick from the VH1 reality show Bands on the Run played. People were acting as if the Beatles resurrected and were playing the tiny room. Girls were snapping photos, cheeseballs in gold preened, thinking they were in the presence of cool and one sycophant was even heard to say that she couldn’t eat her dinner because she was so nervous being so “close to a rock star.”

Um, I’m not sure about this one, but I think one of the pre-requisites for being a rock star is to have an album out, which at that point, Flickerstick did not (They do now, though… their debut can be found used on Amazon for $1.81).

The point is, people who are awed by non-bands like this are people who do what TV tells them to. They don’t (or maybe even can’t) put any effort into developing their own tastes, music means nothing to them, at least in comparison to the tinny sheen of fame that TV applies better than anything else.

Anyway, back to the girl. Word spread through the club that she was there, although I wouldn’t have recognized her if she weren't pointed out to me. I will say that she wasn’t obnoxious at all, and even kept a cap on her wee head, somewhat hiding from the crowd. But she was also drinking a beer, and it suddenly dawned on me that I’ve seen her mentioned on the list of underage Hollywood clubbers. I got confirmation from Lauren (who knows about such things) and just waited.

She finished her beer and came up to the bar to order another. Taking a breath and relishing the moment, I asked for her ID. She paused for a second, stammered that she didn’t have one and pointed out that she’d already gotten a beer.

Not from me she didn’t, and I told her that I couldn’t serve her, at which point she kinda stomped away, perhaps cursing the backwards mentality of the wilds of New Jersey.

I was not trying to be (and hopefully didn’t come across as) a jerk. I was just doing my job. The law states, you gots to be 21, not 21 or on The OC. She no doubt called me an asshole and probably got another drink from someone else at the club at some point, but that’s okay. I am an asshole; I did get some sense of satisfaction in bringing a spot of perspective to the pampered state of celebrity. A teensy tiny infinitesimal temporary spot, but hey, you take what you can get.
1 comment: 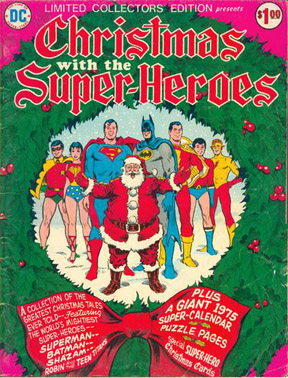 Time to put the Bronze Beauties to bed, as an overhaul of TGGS in the offing for early 2007, so I thought I’d go out with a holiday themed blowout installment.

My oft-mentioned love of this time of year follows through to all media. Christmas movies, music, TV shows, short stories by Dickens and Sedaris, vintage design and yep, comic books. The four collections below left impressions on me almost as indelible as the markers with which I colored some of their inside covers. Whoops. The Archie digest in particular contains such great stories and art from the 50s and 60s that the book has become as perennial to me as IT’S A WONDERFUL LIFE or Mom's sand tarts. The DC and Marvel collections (both in that great huge tabloid size that positively screamed “YOU MUST OWN ME!!!!” from the newsstands in the ‘70s) were the first of what became tradition for the publishers. When the well of worthy holiday themed tales from the past started to run dry in the next decade, both of the Big Two started putting out Xmas comics of new material, which were welcome, but didn’t (and by definition, couldn’t) bring forth that same sense of nostalgia that old stories from a simpler time when Superman and Santa Claus could co-exist in the same story without ruining the “believability” of the character. Sheesh. 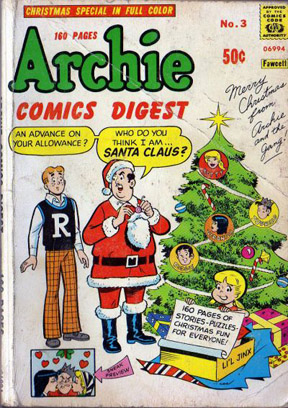 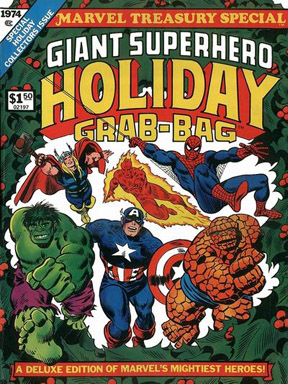 And I thank you for your indulgence. Again.
No comments: