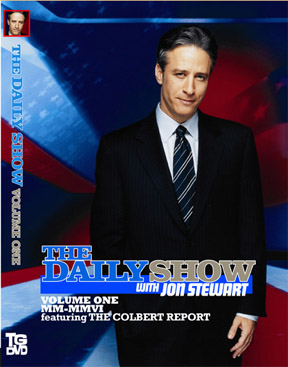 I've just started a new review blog, 50 WORDS OR LESS. The idea of reviewing practically everything that I read, see, hear, watch and collect is daunting and time consuming, but at least potentially worthwhile. Right now I’ve got a lotta stuff on the plate, so hopefully 50 Words will be an exercise in productivity rather than a time wasting distraction.

The problem with being an anal-retentive archivist (I so prefer that term to collector) who happens to be a freelancer is the ease with which one can spend too much time on projects that really serve no purpose. But again, the relative importance of projects falls under my favorite umbrella of subjectivity. Burning compilations of segments from THE DAILY SHOW and THE COLBERT REPORT is just step one; I need to make a cover for the DVD once it’s finished.

Yes, “Need.” Whether it’s to find a particular segment quickly to show at a video-related gathering or just for my own future reference, if I don’t know what the content of the compilation is, along with when it was aired and how long it is, it’s not complete (to that end, where the hell is the index on the SNL Season One box set? Now I have to go and make my own!).

But I used to be even more obsessive than that. I used to redo covers for DVDs if I thought they were ugly. Not my own compilations, I’m talking about official, purchased discs that had artwork that I felt was substandard compared to the content. I redid covers for IT’S A MAD, MAD, MAD, MAD WORLD, ANNIE HALL, CRIMES AND MISDEMEANORS, about a dozen Hitchcock films, THE INCREDIBLE HULK TV Pilot DVD (which, in a crass case of cross promotion, used art from Ang Lee’s film), some cheapo collections of public domain Christmas Cartoons and the first three James Bond films (I did abandon that project after GOLDFINGER, however).

I’m not saying never, but these days I realize that spending three or four hours either scanning or downloading artwork, resizing it, designing or appropriating logos, laying out, printing and cutting covers for things that already have covers puts me firmly in the realm of the basement-dwelling über-nerds. I actually do have more important things to do (“important” again being relative). And so, as much as I despise the packaging for the 14-disc ULTIMATE SUPERMAN COLLECTION, I will fight the urge to design individual cases for the films and just leave them be (at least for now). Instead, I’ll use that time to write about my urge to design individual cases for the 14-disc ULTIMATE SUPERMAN COLLECTION because I despise its packaging.

See? MUCH better use of time.

POSTSCRIPT, October 2010:
Hey, guess what I spent a month doing in August! Making new DVD covers for about half of my collection (including the rest of the James Bonds). The impetus this time was as much about saving space as aesthetics.... I made new covers that fit into the slim DVD cases, so they take up literally half as much space as they used to. I still haven't tackled that Superman set, though..... hmmm.....

POSTSCRIPT, August 2012:
Finally got around to that Superman set last month. Good thing I waited, though, because I replaced the DVD set with Blu-Rays.
No comments: