The films 10, THE WOMAN IN RED and AMERICAN BEAUTY all center around guys who are suffering midlife-crises. And in each of those movies, the protagonist (played by Dudley Moore, Gene Wilder and Kevin Spacey respectively) is precisely 42 years old.

I’m 42 years old. And I ain’t nowhere near a midlife crisis. On the contrary, despite some physical signs of aging like deteriorating eyesight, thinning and graying hair (the latter part of which I actually like) and a Grampa-Simpsoneque tendency to bitch about everything, I still feel like I did when I was half my age. Hell, I’m still not sure what I wanna do when I grow up.

But there are some things that I have to accept are never going to happen in my life. Some of them are small (I’ll never be able to grow sideburns) and some are big (my grandfather’s prophecy upon my birth shall never come to be… never mind what it was). But most fall somewhere in the middle.

When my father’s first marriage ended in 1962, he did what lots of freshly-single guys did. He sowed some oats, he started smoking and he bought a brand new sports car. A gorgeous white Volvo P-1800 S.

From the time I was old enough to even think about driving, I coveted that car. Dad bought me a toy version of it, an Impy Road-Master Super-Car (sorta like a Matchbox), which I painted white to match Dad’s. Jokes about the 1800 being mine when I got old enough eventually turned into a promise. But somewhere along the way, the Volvo fell by the wayside. A rusting frame rendered it immobile and landed it into storage, sleeping under a tarp first next to the garage, then inside a barn my father bought a mile up the road.

I had intentions. I wanted to get the Volvo fixed up and on the road. But life didn’t make room for that. First, it was financial. I just wasn’t making enough money. By the time I was solvent enough to afford to do so, I was living in Hoboken, New Jersey, a town not conducive to driving / parking / owning a low-riding, white vintage sports car. I can afford to fix it, not own it up here. 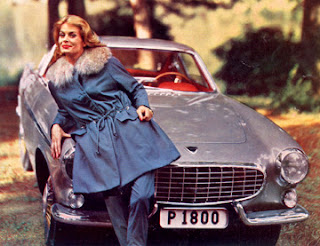 But in all honesty, the biggest issue is, I’m just not a vintage sports car guy. I’m not a motorhead at all, I didn’t even get my driver’s license until I was 17. I’ve owned exactly two cars in my life, a 1986 Honda Accord and my current vehicle, a 2004 Jeep Liberty. Not exactly “cool” modes of transportation, but they suited my needs… including my need for simplicity. Not only do I not possess the mechanical knowledge required to drive and own a car with a manual transmission and no power anything, I couldn’t come close to being able to answer the questions that people would ask me every single time I got out of the damn thing.


I never wanted to fully give up on the idea of the 1800 someday being “mine,” but I have to. Dad finally got tired of waiting for me to do something, so last year he took it to a body shop to begin the process of restoration. When it’s done… well, it won’t be mine. It’ll probably be sold. My parents need the money more than I need to own a car that will sit in Lancaster so I can drive it four times a year. My biggest wish at this point is that Dad hangs onto it for a while, driving it himself. Dad just turned 78 last month and he’s feeling his age more than I am. Maybe even just driving the Volvo to the diner will make him feel a little bit young again.

At least I still have the toy. It’s sitting on a shelf in my living room. Plastic and metal. Easier to have than the real thing. Small.
2 comments: