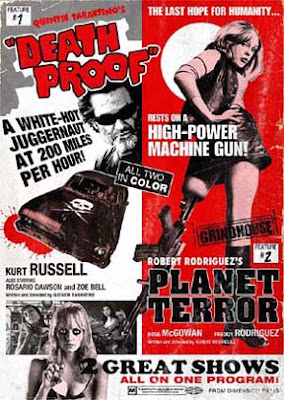 It’s been a rather depressing week if you’re someone who feels beaten down by the ever-branching stupidity of the American people. First, this whole ridiculous Don Imus controversy, which, based on the coverage it’s getting in the news, is tantamount to King Bush coming out and saying, “Y’know what? That colored fella, Kanye West hit the nail on the head!” It’s DON IMUS, fer cryin’ out loud!! Who's shocked and, moreso, who gives a shit? I’m sure that there were hundreds of other idiotic DJs spouting crap across the country’s airwaves that morning that was every bit as offensive and stupid as Cowboy Don’s “nappy haired hoes” remark. Did he deserve to be called out on it? Sure. But to turn it into the biggest news of the week and infer that the Rutgers Basketball Team (and ALL WOMEN AND AFRICAN- AMERICANS) are permanently scarred by the offhand comment is as insulting to women and African-Americans as the initial statement.

In lesser, but also depressing news, GRINDHOUSE came out over the weekend and flopped big time (coming in #4 behind BLADES OF GLORY (Ha, ha, Will Ferrell fall down!), MEET THE ROBINSONS (parents, just say no!) and ARE WE DONE YET? (God, I hope so). I saw the movie with Fraulein Opfer and have to admit that I was pretty disappointed. I appreciated the esthetic and the effort (and very much appreciated Rose McGowan), but walked out of the theater amazed at how much fun I DIDN’T have. It was just okay. I spent a good portion of the three hours fairly bored and sporadically annoyed. Surprisingly, Robert Rodriguez’ PLANET TERROR was the better of the two films, and far more in the spirit of the exploitation films the double feature claims to celebrate. Quentin Tarantino’s DEATH PROOF, on the other hand, has some nice moments, but is far too talky to be an exploitation film. On top of the that, the second half of his film (in which two bad-ass stunt women and Rosario Dawson turn the tables on the homicidal Kurt Russell) is pretty much unbearable, with annoyingly mannered performances (QT’s dialogue [for the first time ever] feels totally unbelievable coming out of the mouths of these women) and plot points big enough to drive a Dodge Charger through. And no, the fact that it’s a hot-rod-serial-killer film doesn’t excuse it.

It is interesting to note that Tarantino’s most pro-feminist work is his least successful, creatively. I appreciate the idea of turning the tables on the women-in-peril genre and having a group of tough chicks literally turn the scarred, manly villain into a whimpering, emasculated simp. But for whatever reason (I have to think it’s just poor casting, another anomaly for a QT film), it just doesn’t play. 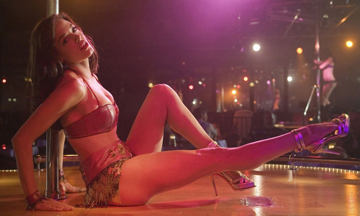 I think GRINDHOUSE would’ve benefited from even MORE editing. If both films were cut down to just over an hour (which easily could’ve happened), the whole experience would’ve been more exhilarating.

But more depressing than my lack of total enthusiasm for GRINDHOUSE is the fact that the general public is just too stupid to even UNDERSTAND what the movie is. Notices posted at the box office (at a theater smack in the midst of Manhattan, mind you) had to explain that the scratches, missing reels and fluctuating print quality in GRINDHOUSE are intentional, that it’s attempting to recreate an esthetic (of course, I’m paraphrasing, they wouldn’t use the word “esthetic”). And now word comes that the movie is going to be re-released as two separate films, partially because some people, unaware that they had paid for a double feature, GOT UP AND LEFT THE THEATER AFTER PLANET TERROR WAS OVER!!!!

I don’t expect the grindhouse esthetic to be everyone’s cup of tea. I understand that most people, especially younger folks, even if they’ve heard of or seen films like SHAFT, CANNIBAL HOLOCAUST or SATAN’S SADISTS, might not grasp the bigger picture of the culture of exploitation films. But that still doesn’t explain or excuse walking into a movie being so completely ignorant of what you’re about to see that you complain to the manager about the scratchy film and then leave halfway through because you think it’s over!!! It’s nothing but sheer stupidity.

I haven't seen "Grindhouse" yet, but I'm keen to do so, in spite of my loathing of the movie going experience. I'd better hurry before they split it up (or it slinks ignominiously from the theaters). I'm sure I'll like it better than you, though I've heard QT's "Death Proof" is pretty glacially paced until it gets going. Talkiness, though, might be dead on. I've seen a fair amount of those grindhouse epics and talk scenes were often there to pad the films to feature-length.

I can tell my only real beef will be this: I don't think my bladder can cope with a 3-hour-plus movie any more. I'd hate to miss some of those cool trailers in between flicks, but I fear I'll have to. God, I hate getting old. But as my dad says: "beats the alternative."