You only trust FAMILY 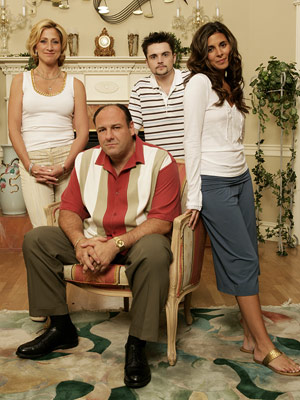 As a group of us gathered last night to watch the half-season premiere of The Sopranos (dead soldiers: nine bottles of wine and about 5,000,000 brain cells), speculation was tossed around as to how the show’s going to wrap up. We’re hardly alone. Everything from Entertainment Weekly to Vanity Fair to the frickin’ NBC Nightly News has weighed in, with opinions heated and diverse.

There are those who think that the series needs to end with Tony either dead or in jail (I say no way to either). There are others who feel that Jersey somehow needs to “beat” New York in some way (which makes me scratch my head). And yet others predict that David Chase will end the series with another of his innocuous climaxes in which ennui trumps action and life continues on its merry gray march.

I kinda hope that there is SOME kind of bow tied on the package. Over the past month, I’ve rewatched every single episode and have come to feel that The Sopranos is (soon to be was) the greatest dramatic series in the history of television (as opposed to the inarguable “one of the greatest”). Its singular balance of drama and comedy, its ability to be alternately terrifying and touching, its wit and the amazing cast of perfectly balanced characters is something that’s simply never been matched in TV. And as the hub of the wheel, James Gandolfini managed to make Tony Soprano equal parts horrible and likeable (just ask Agent Harris, he’ll tell you… it’s hard to hate the guy, no matter how much you want him to go down).

So, what’s going to happen over the course of the next eight episodes? Well, I do have a guess. I don’t think anyone’s going to be punished in a traditional dramatic sense because (as John Hanlon reminded us all last night), Chase has always been adamant about The Sopranos not being a morality tale. He’s not judging these people, he’s merely telling their story. And a huge part of their story is the seeming inevitability of becoming part of (or at least affected by) the “family” if you’re born into the literal family. In the past ten years (or six seasons), AJ Soprano has gone from the innocent little kid who didn’t even know his dad was in the mafia to someone who resents his sometimes-distant father’s power and status while simultaneously trying to use it to his advantage. AJ’s arc has always been tragic, the poor kid never had a “good” season (unlike sister Meadow, whose issues with her family were the usual teen-into-adult trauma… and she seems to have found an identity for herself while finding some kind of peace with her family).

So, AJ. Some have speculated that AJ (or Meadow) is going to get killed, but I don’t think so (and not just because that would be too much like the conclusion of The Godfather Part III). I think the series is going to end with AJ becoming a part of his father’s other family, due to some event (will he kill someone?) that would make it impossible to keep him isolated anymore. Which would of course be a tragedy to Tony (and Carmela), and would bring AJ’s story arc to a close, while not giving the series a forced final chapter. If Christopher’s burgeoning movie career takes him away (or OUT), Tony would have no choice but to turn to his son. After all, “You can only really trust family.” And the entire series has been about the balance between Tony’s two families. It seems like the only logical conclusion.

Of course, I’m probably wrong, since one of the great things about the show has been its unpredictability. Regardless, it’s a sure bet that eight weeks from now, life will go on, the mob will go on, a mere stone’s throw from where I sit, the Sopranos will go on. Just not on TV anymore.

Email ThisBlogThis!Share to TwitterShare to FacebookShare to Pinterest
Labels: the Sopranos, TV