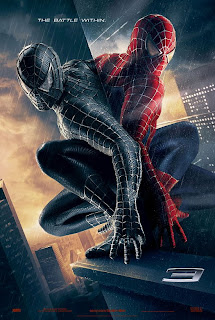 So, SPIDER-MAN 3. My thoughts on this most bizarre romantic musical comedy can be found HERE, but I wanted to also make note of the moviegoing experience we had when John, Lysa, Gary, Andrea and I saw the blockbuster on opening Sunday. I know, what did I expect, going to a big summer movie on opening weekend? I knew there would be kids and loud jerks and cell phones going off, but it still never makes it all right.

The three stooges sitting right behind us in the balcony of theater 4 at the Union Square 14 were annoying enough during the previews, with their raucous enthusiasm for I NOW PRONOUNCE YOU CHUCK AND LARRY and SHREK THE THIRD (both of which I shall be skipping). But I don’t mind when people talk during the advertainment before the film. Just shut up when the feature starts. But instead, that was when the combination exposition / comedy show began. With the introduction of every new character and story element, Moe (their leader) would call the roll. “Symbiote.” “Sandman.” “New Goblin.” And then offer hilarious, loud commentary to the action as the story rolled along. When one of the many eye-straining CG battles ended, Moe cracked, “WHOA, he didn’t learn that at Tiger Schulmann!” to which Curly echoed, “Didn’t learn that at Tiger Schulmann!” which was the last straw for me, so I turned around and asked them to keep it down. When Moe didn’t hear me, I tapped him on the knee. “This guy’s touching me?” he stated to Larry in that alpha-male rhetorical tough-guy manner, to which I said, “Look, I’m sorry, but you guys are right in our ears and you’re ruining the movie for us!”

To which Moe actually said, “Hey, it’s not just us, everyone’s talkin’!” as if that made it okay. The upside is that, for the most part, the stooges did shut up for the rest of the movie, but the downside is that they weren’t the only distraction. The kid next to John felt that he had to show him how the screensaver on his cell phone was the image of Black-Spidey atop the church tower; Complaining kids grew understandably more and more impatient as the love story continued… and continued… and continued….

But the most disturbing incident happened (SPOILER ALERT) during the scene where Dark Peter accidentally clobbers Mary Jane. As MJ hit the floor of “The Jazz Club,” most of the audience gasped (the appropriate response), but throughout the theater, there was also a risible smattering of male applause.

SPIDEY 3 is by far the least enjoyable of the series, but its faults still don’t excuse a lack of courtesy from the crowd. By the end, after the villains were gone but before the story finished, many in the obviously restless audience got up and left, unapologetically blocking views and talking. It was an awful way for a bad moviegoing experience to end.

Again, I know… what did I expect. But also again, it doesn’t make it all right. The sad thing is, the next time there’s an event movie that I want to see, I’m finally gonna wait. I can’t do this anymore. I’ll try to figure out the least likely time and venue to encounter the stooges and the kids. I’ll hope that some semblance of civility will prevail and I’ll actually be able to focus on the movie in front of me instead of the horrible real world from which I’m trying to escape for two hours.
2 comments: