So, after re-watching "Made in America," the much-dissected and highly controversial final Sopranos episode, I tend to side with the theory that it wasn’t Tony (nor Carmela nor AJ) that got whacked in those last seconds of the show… it was us.

I’m not speaking metaphorically as a disgruntled fan who thinks the episode was anti-climactic and sucked; I’m speaking literally (well, figuratively literally, if that’s not too oxymoronic). I mean that we, the people sitting at home watching the TV show have been cut out of the Sopranos’ lives, not the other way around.

Think about it: The 11 seconds of black screen seem to refer back to Bobby’s statement in “Soprano Home Movies” about getting killed and how he thinks (or hopes) “You probably don’t even hear it when it happens.” But the final shot is not a subjective POV from Tony’s perspective of Meadow coming through the door, it’s a shot of Tony looking up. So for whom do things go black in that scene? The viewer. We’re out. The music stops and there’s no song accompanying the end credits (I wouldn’t be surprised if David Chase even tried to ditch those). 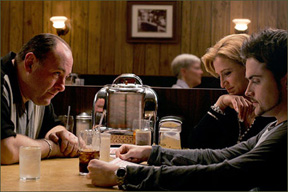 We were so distracted by trying to figure out the motives of the strangely familiar background characters (are those the guys who tried to kill Tony? Is that Phil’s cousin? I think no to both) and the (ironically?) uplifting power ballad and trying to suss out the actions of the leads (why can’t Meadow parallel park in that huge space?) that, like with so many departed characters in the show, we never saw it coming.

Maybe Tony got whacked right after we did. Maybe not. Maybe life goes on, at least for a while. Carlo’s flipped, so that’s going to be a mess, and when Agent Harris said, “We’re gonna win this thing,” was he talking about New Jersey over New York or the Feds getting the evidence they finally need to take down Tony Soprano? Maybe Meadow’s pregnant, maybe AJ’s going to slip back into depression. The point is, it doesn’t matter.

I also don’t think it’s a stretch to view the last episode as a sort of kiss off to the obsessed, nitpicking and impossible to please fans from David Chase (and by proxy James Gandolfini). One song in the episode, Vanilla Fudge’s version of the Supremes’ “You Keep Me Hangin’ On” is about someone being badgered by an ex-lover, someone who really wants to just move on to the next phase in their life, someone who asks, “Set me free, why don’t you babe? Get off my life…” If Chase sought some kind of catharsis by whacking his audience, well, I grant him that. He earned it. The Sopranos may have had a few off episodes, but I would not go so far as to say it ever let me down. Its perfect send-off makes me miss it even more.

Email ThisBlogThis!Share to TwitterShare to FacebookShare to Pinterest
Labels: lover, the Sopranos, TV