It’s 85 degrees, and humid as a cheesemonger’s armpit today. Back to normal for August.

For three days last week, northern New Jersey and much of the east coast became wrapped in the most unseasonable weather. In the midst of August, traditionally my most hated month… it felt like Autumn. It was gray and chilly and rainy. Tuesday the temperature hit a high of 59 degrees. It was glorious.

Of course, not everyone agreed with me. One of my coworkers referred to the weather as “gloomy.” Janice Huff, the meteorologist for WNBC in New York (aka TODAY SHOW Tryouts) was practically apologizing for the cool weather, promising that by the weekend, things would be “better.” Why do weather people always have to editorialize about the weather? Isn’t it all subjective?

I found the wind and the rain and the cool brisk and invigorating in a marked contrast to the stifling, oppressive, soul-sucking humidity of a dog summer day. But then again, I don’t like a lot of things that are popular.

Which brings us to SUPERBAD. Despite my ever-increasing distaste for Judd Apatow (don’t even get me started on the bullshit conservative fairy tale that was KNOCKED UP or the fucked up mixed message of THE 40-YEAR OLD VIRGIN), the fact that he didn’t write or direct SUPERBAD gave me false hope. I loved the ads for it, particularly the bit about Seth (Jonah Hill) and Evan (Michael Cera) declaring their best-friend-love for each other, capped with a “Boop!” on the nose. I was hoping for an atypical comedy about some awkward teens’ friendship during that key transition from high school to college. What I got was a typical comedy about teens trying to get laid, full of dick jokes and unfunny slapstick and characters so broad they might as well have been cartoons. Whoopee. It’s not hard to believe that Seth Rogen and Evan Goldberg started writing this when they were kids.

I absolutely despised the entire half of the film that followed Fogell / McLovin (Christopher Mintz-Plasse, the Neo-Screech) and the fun-lovin’ cops on their booze-fueled escapades. The awkwardness of Evan quickly went from charming to annoying. And worst of all, Seth… is an asshole. He thinks nothing of using people (even his so-called friends) and doesn’t give a shit about anyone except himself (and Evan when he feels like it). His ultimate plan is to get the girl who seems to like him drunk so he can fuck her, and “make” her be his girlfriend for the summer so he, uh, has experience when he gets to college, where he thinks he’ll be able to fuck anyone he wants. What a winner. Why should I root for a lead character in a movie that I’d hate in real life? (And don’t tell me we’re not supposed to root for him; This ain’t ELEPHANT here).

Maybe my problem is that I didn’t spend every waking moment in high school trying to get laid or loaded (not that I was pursuing loftier goals), I just can’t relate to the notion that it’s what everyone did during their teenage years. I laughed out loud numerous times during SUPERBAD, but there were long stretches where everyone around me was in stitches while I sat in silence, kinda wishing I were home watching DAZED AND CONFUSED or RUSHMORE.

In case you couldn’t tell, I am a cynic. Always have been, really. My earliest political memory is Watergate, which engendered a distrust of politicians at the age of 8. I started doubting the existence of God at a pretty young age (thank you, Pastor Michael). I got into trouble in high school for questioning and challenging authority. And I always felt that most things that most people like are crap.

Over the years, my cynicism about human nature has compounded. It became my feeling that most people were narcissistic and apathetic, that even basic “good” behavior was rooted in some kind of self-serving ulterior motive, be it hoping for positive Karma or fearing some Ultimate Divine Retribution for being “bad.”

More recently, I became extremely cynical about Love, with a capital “L.” Not that I hadn’t felt it, I had, a few of those times with (as some say) every fiber of my being. But for very different reasons, in each case, it never worked out for me, just like it usually doesn’t work out for most people (think about it, everyone’s had a bunch of failed relationships, with only a relative few finding love that truly grows and lasts).

And in some of my cases, when it didn’t work out, I crashed. Hard. I dug a pit of destructive self-pity into which, I’m sad to say, I dragged some friends and acquaintances along with me (those patient and compassionate people have my eternal apologies and thanks). I became defined by the person I lost, became obsessed with trying to figure out what went wrong, or trying to win them back or at times just wallowed in my own black pool of depression. It was quite pathetic.

And then, about two years ago, after the last particularly soap-operatic relationship denouement, I defied everyone’s expectations by just… getting over it. Quickly. I had an epiphany. I had had enough of allowing other people to dictate who I was and how I felt. And, for maybe the first time in my life, I saw the joy of being alone. I wasn’t looking for the next love of my life (although I did continue to date), I spent time with friends and went to movies by myself and enjoyed my freedom and solitude. I had come to feel that the effort of trying to make one person your be-all and end-all was stupid, and that the pain of love ending was not worth the passing pleasures of love existent. A simple, uncomplicated life divided amongst friends was better.

And then, in an instance of cosmically bad timing, I met someone. Actually, I had known her for some years, casually, as a customer and sometimes performer at the bar where I sling. We had a long history of flirting, but had never known each other outside of that context, and we also seemed to always be in the opposite situation. When I was single, she wasn’t and vice versa.

But this time, the situation was, well, not exactly even, but winding in that direction. She was going through a separation from her husband and moving back to Hoboken and we started to really get to know each other. And it was good. The things we had in common were scary, and the attraction was undeniable. We made each other laugh. A lot. We spent more and more time together.

For a while, we were both happy to keep things light. She was going through too much to jump right into something serious with me, and I was still in that place where I didn’t want another relationship. Maybe ever. But as time wore on, and feelings deepened, she wanted more. I continued to keep her at arm’s length, engaging in sometimes silly, stupid, distracting behavior that she would come to call self-sabotage. Finally, just after Christmas, she had had enough. It was time to, to use a colorful euphemism, shit or get off the pot.

And so, still full of reservations, but afraid of losing her, I agreed to enter into an official relationship. It was not the most romantic beginning, and what played out over the next few months was, on my end, half-hearted. I was still afraid. Only instead of discussing my fears with her, I opted to talk about it with other people. She could sense the tension and began reacting in an understandable, but also destructive manner. It wasn't long before she got tired of putting up with a C-level boyfriend, and things came to an end.

Well, sort of. She tried to sever the relationship completely, but that didn’t last; Neither one of us was able to stay away. The fact that we work together (something that started after we’d begun hanging out, by the way) certainly didn’t help matters. We were friendly, but oddly distant and awkward. She began dating other guys. I stayed home, feeling no desire to even hang out with any women casually.

I grew sour. Restless. A dissatisfaction took root, one different from what I’d felt after other breakups. Things felt unresolved, almost unreal. I now know it’s because I just wasn’t truly dealing with anything rattling around inside of me. Was I really happy being alone, or was I just being safe? I had spent so much time forging and shining my defensive Single-Armor that I didn’t wanna take it off.

Then very late one night, as I lay in bed trying to get to sleep, I received a series of text messages from my friend and co-worker Lauren. Lauren had been there for two of my breakups, and was of considerable aid in the last one, granting me much in the way of perspective. She knew my feelings about love and all that jazz, and, unlike so many other girls I know, she has her shit together when it comes to relationships (Lauren refreshingly doesn’t HAVE to have a boyfriend, she’s completely fine being on her own until something feels right to her).

Lauren’s text messages read like the impassioned blurt of someone who’d been holding back an opinion for a long time. In a caring, yet borderline scolding manner, she told me how much she liked the woman I was letting go, how much of a good match she thought we were, and asked me to seriously consider what would happen when she found someone else. In fact, I had already been considering those things, but hearing it from Lauren made it seem… urgent.

And then, another epiphany. I was being an idiot. Lauren was right.

And so, soon after that, with no reservations and much enthusiasm, I made things right. We started over, considering what led up to the fresh start a long, awkward gestation period. The almost four months since then have been pretty damn great. We’re still working, still learning, but finally, the time is right… for both of us.

This doesn’t mean I’m not still a cynical misanthrope (to quote Linus Van Pelt, I love humanity; It’s PEOPLE I can’t stand). I still get all sneerful (my word) of the way so many people blindly follow society’s dicta. I still don’t believe in fate or karma or God or destiny or anything, really… 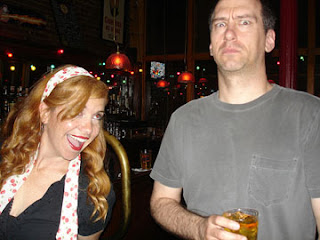 …Except Lysa. I believe in Lysa.