I cannot stand Kathy Griffin. I find her to be the epitome of Hollywood hypocrisy, someone whose entire shtick of trashing the superficial, narcissistic nature of celebrity is rooted not in a genuine disdain for it, but a jealous narcissism that’s every bit as despicable as the behavior of those she excoriates (I’ve heard stories from people who know her that back this up). I never thought she was funny (remember when she had a fifteen minute “bit” that was just about the fact that she had a line in PULP FICTION? Hilarious!!!), and still don’t. 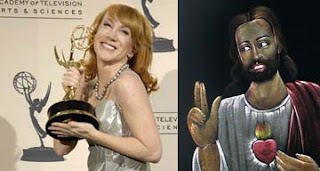 NOW, having said that, I gotta back the bitch. For those who missed it, upon receiving an Emmy® for her Bravo reality show (at the B-Level Creative Arts Emmy ceremony, which I guess makes sense), Griffin said, "A lot of people come up here and thank Jesus for this award. I want you to know that no one had less to do with this award than Jesus. Suck it, Jesus. This award is my god now."

Immediately, of course, the Christian community came out against Griffin as if she were the Antichrist (as opposed to simply being anti-Christ). Catholic League President Bill Donohue called her comments “Hate Speech” (and he should know, being an expert practitioner himself against gays and non-Christians) and successfully lobbied E! to censor her statements from the broadcast when it aired.

Of course, as an avowed atheist who finds the concept of God to be the most damaging invention in the history of mankind, I found Griffin’s speech to be hilarious. But beyond that, I thought it was a refreshing change of pace and a challenge to the insipid tendency of award winners (in any field) to be so presumptuous as to declare that God (if it does exist) actually took an active hand in the acquisition of their shiny trophy. “Forget all those starving people, victims of war and general injustice in the world, I have to make sure that Rihanna wins a VMA!”

Now, I know that a lot of times, award winners aren’t LITERALLY claiming that the Almighty made their award win a personal project for that day, that they’re just giving general thanks to the deity in which they believe. But a lot of times, they DO seem to be taking that ridiculously self-absorbed notion of a guiding hand to a petty, ludicrous extreme (joining the silly ranks of God-thanking lottery winners, disaster survivors and game-winning athletes). If that idea is offensive not just to atheists like myself, but lots of Christians as well, then can we just please allow ONE PERSON to make a blasphemous gag about a lack of divine guidance?

All Trick, No Treat

I went to see Rob Zombie’s remake of John Carpenter’s HALLOWEEN with fairly low expectations, but was completely amazed at the bland, unfrightening misfire I experienced. It’s almost as if the filmmakers decided, “I know! Let’s remake one of the most iconic, groundbreaking horror films of all time and take out all the scary stuff!” Yes, the long backstory (which shows Michael Myers’ bad childhood) is utterly superfluous. Not only does it remove all of the mystery from the character, but why make Michael sympathetic if you’re going to continue to show him as an utter psychopath? Also, switching most of the climactic action from the mundane suburban home of the original to the spooky, decrepit abandoned Myers home makes the terror less relatable to the audience. The whole film is over-designed (the more intricate mask is not nearly as scary as the simple original). 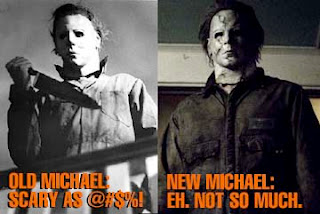 But the movie’s remarkable lack of suspense is its worst affront. To wit, one of the most horrifying scenes from the original is the one in which Laurie (Jamie Lee Curtis), after discovering the dead bodies in the house across the street and being attacked by Michael, runs back to the home in which she’s babysitting and bangs frantically on the locked front door for Tommy to open it. The camera cuts from Laurie to the view over her shoulder of Michael leisurely walking across the street, knife in hand, while Tommy, asleep upstairs, slooooooowly awakens and agrees to come down and let his babysitter in… it’s a beautifully agonizing scene, but in the remake, after Laurie discovers the bodies, she runs back across the street and bangs on the door…. But there’s NOT ONE SHOT OF MICHAEL FOLLOWING AFTER HER!!

What makes it so mind blowing is that writer / director Rob Zombie is an avowed acolyte of the genre, the film and the film’s auteur, John Carpenter. Is it possible that he simply doesn’t understand the elements that made 1978’s HALLOWEEN so terrifying and successful? It is possible that, based on nothing more than Zombie’s tattoos, the concept of “Less is More” is a foreign aesthetic to him.

But what’s even sadder is that it was obvious at the showing we attended that most of the young audience had never seen the original. Two girls next to us were screaming and jumping and talking through the whole thing, and their response to my opining that the film wasn’t at all frightening compared to the original was, “It was scarier than THIS?”

So I stabbed them in the necks with knitting needles (Good thing I always knit at the movies).
1 comment: