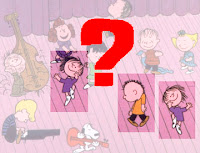 I would wager that I cradle A CHARLIE BROWN CHRISTMAS as close to my geeky breast as anyone on the planet (I could stage a one-man show of the darn thing… just ask my friends). But there was always something that slightly nagged at me. There are three kids in the show who were unidentified. Who were the twin girls and the spiky haired kid who does that shoulder-head-bob dance at the school play? Were they just unnamed extra characters used to fill up space? Or did they have identities? 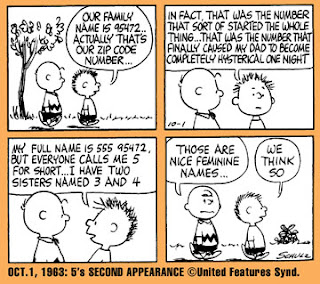 And the twins? They’re 5’s sisters, whom we meet some weeks later on October 17th. Their names? 3 and 4. (Predating SEINFELD’s gag about George naming his kid 7 by decades). 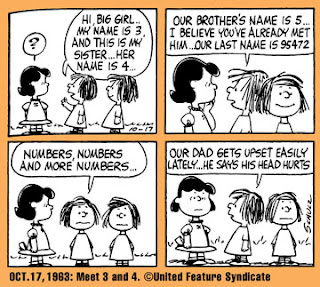 The numerically-named siblings were Charles Schulz’s commentary on the ever-increasing use of numbers to identify individuals, from Social Security to zip codes to expanded phone numbers. There are a few funny strips surrounding the kids (such as the one in which Snoopy, who has problems with names, isn’t sure if it’s 5 or V), but it seems as if Schulz came to feel that they were one-note jokes. They didn’t disappear from the strip altogether (5 makes appearances through the end of the book), but, as in the Christmas cartoon, they quickly become relegated to tertiary status in the Peanuts universe.

It’s also interesting to note that their last name, 95472 is their zip code… which would place them in Sebastopol, California. So, did the kids just move from the west coast to Charlie Brown’s unnamed, but very seasonal neighborhood? Or does it snow in Sebastapol California? Hmm…

Only future volumes will tell how long 3, 4 and 5 stayed in the ‘hood, but it’s nice to now be able to fully identify every single character in A CHARLIE BROWN CHRISTMAS. Although in all honesty, I can’t tell 3 and 4 apart at all.