Now, this story wasn’t presented in the manner I would have (were I a CNN producer, an unlikely career shift), with an apocalyptic tenor akin to reporting on a plague of rats and ignorance putting an end to all mankind, but as a breezy Mother’s Day human interest story. “Oh, my can you imagine how many Mother’s Day cards she gets? Tee Hee, the world keeps spinnin’! Gee, gas is expensive!” 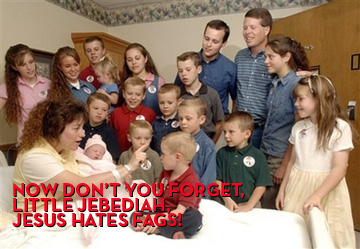 To my further horror, with a little research, I found out that the Duggar family (helmed by, I shit you not, Jim Bob and Michelle) are mini-celebrities, the glib subjects of a TV show and a Discovery Health sub-website featuring such jovial sections as “Fun Facts” and “Name That Duggar!” Where’s the subsect on guessing how cavernous Michelle’s vagina has become? Do the babies just whoosh right out at this point, ala the Catholic Mom at the beginning of MONTY PYTHON’S MEANING OF LIFE? Just as disturbing to ponder, how, uh, difficult is it to, um, inseminate a vessel so large?

Brr. Anyway. If there were any example of proof that the so-called “liberal media” doesn’t exist, this story is it. Where’s the voice offering the possibility that this sanctimonious, narcissistic Divine overpopulation is a BAD thing not only for the Duggar clan (I was tempted to use a K there) but for the world at large? (My pal Bob did point out that in 2005, San Francisco Gate columnist Mark Morford wrote a blisteringly brilliant response, when the Duggars had a paltry brood of 16). Family values, my ass.

Not that I was shocked by the tone of the coverage. Despite the fact that I watch it A LOT, I really have a ton of disdain for CNN (and all the US cable news networks, MSNBC's brilliant and correct Keith Olbermann aside). The mewling prattle of the smiling anchors, usually unable to hide their own personal biases (I’m glaring at you, Tony Harris) is all morning-show friendly, regardless of the airtime. They happily propagate political non-issues, keeping stories like a dearth of flag pins and Reverend Wright in the public eye. The war is questioned while the military is paradoxically celebrated as infallible. Non-news stories about car crashes and house fires and liquor store robberies get coverage because, and ONLY because they have video (which should be an easy rule of thumb for television journalism: Would it be a worthwhile story if there were no pretty pictures to look at? No? Then it’s not news.).

Again, I’m not shocked. As with almost everything I see on the “news,” the clueless, happy tale of the Duggars just reinforces the ever-deepening rumbling in my gut that repeats a prophecy in a painful, gastric loop, sounding something like… “We’re fucked.”

I know I'm a horrible person (blah, blah, blah), but at this point when I find out yet another couple we know is expecting I can't even work up the energy to be apathetic. I don’t get people who have kids any more. Yes, we're hardwired to procreate. It takes thought and planning NOT to have kids. But just because we're hardwired to it doesn't mean it's a good idea or something worth celebrating. I don't hate kids (I don't enjoy being around them, but I'm not a monster) Kids are like any other humans; some are alright, some are assholes. I remember being a kid and who (mostly) were the banes of my existence? Other kids. Most adults seem to forget that, and tar all kids with the "they're precious" brush. Not so much.

The Duggars are disgusting. Period. In a world with diminishing natural resources, these fuckers (literal and figurative) are consuming way more than any single family ought to be allowed. And all the kids' names begin with the letter "J". One is named Jinger. WTF? Did they run out of Bible-based J-names? The handle "J-Horror" is what crappy, incomprehensible fright flicks from Japan goes by these days. I think "J-Horror" is the Duggar Klan (fuck it; I will use the "k").

Over six-billion people. More and more consumers in budding consumer cultures like India and China. Finite amount of petroleum. Barely any exploration and pursuit of alternative, renewable energy. Ethanol using up corn, causing food riots in the Third World. Then idiots here go batshit and start buying multiples of 50-pound bags of rice because they conflate food riot footage with what is going on here. Idiots at Sam's Club and Costco buying the current limit of 200-pounds of rice (per visit). Because Americans love to panic.

Oh golly. I'm ranting. Fuck humanity. Fuck it sideways. And fuck the Duggars (but use a condom).

Thank you.
Thank you.
Thank you 17 (almost 18) times for preaching the moronic values of this family and quiverfull itself. I HATE the Duggars and I cannot understand why they are celebrated by Discovery Channel. Or America? They really are Nascar Meets Klan meets Baptist Snake Dancer. With bad midwest mullet wedding hair. But I digress.
I leave you with this... Picture the serene Michelle and JimBOOB and their brood standing around an infant newly evacuated from the vagina that has lost all elasticity--like her grandma's underwear..Anyway, the caption under the pic says, "VAGINA: It's not a clown car."

Seriously. Just because one has the ability to repeatedly get pregnant and pop out child after child doesn't mean it is right. WTF? I have boycotted TLC because they cater to freaks like this. Did you know that they didn't have the money to house all those kids so their neighbors "chipped in" and paid for that ridiculously large house they live in? The Duggars are the essence of white trash and they parade their 'godliness" around like it is a cape. Want more children? Be f'ing "Christians" and adopt all those kids that you didn't want aborted.

No, we're hardwired to have sex. Offspring are just a side effect (albeit an unfortunate one, IMO).

The Duggar parents are glorified (on TLC) for having an exorbitant number of children.

Why should people look up to them for having so many children and why are they being rewarded for it???

All that they're doing is overpopulating an already overcrowded world with limited resources. By the year 2050, the earth's population is estimated to reach 9 billion people. That's almost maximum capacity for this planet and its resources.

Michelle and Jim Bob Duggar are so selfish and irresponsible. If they want a lot of children, why don't they adopt some of the million or so orphans in this country and around the world???? The reason is because Michelle and Jim Bob think that by having so many of their own children, that they'll get the attention and adoration that they so want.

They call themselves good "Christians". Shouldn't good and kind hearted Christians be trying to help others living in this world rather than making carbon copies of themselves???

No, no, no... it's not Oklahoma! There's a state even more backward and hick than Oklahoma, and it's called Arkansas. That's where the Duggar family lives. Please give credit where credit is due. Arkansas! :) We have enough problems here in Oklahoma without being associated with that train wreck of a family.

This is so refreshing...I was starting to think no one else saw the baby-crazy people and recent reproduction frenzy as an environmental nightmare! All of you have made my day!

The only state worse than Arkansas is West Virginia...I agree Jim Bob & Michelle are totally disgusting and I can't believe that TLC actually has these redneck morons on the tube. A woman must submit to her husband...yeah, right. Who in their right mind would marry a man named Jim Bob? Where's John Boy? EEEWWW!!!!!!!!!

I honestly wish this stupid bitch would drop dead. What on earth makes these morons think their genes are so fucking wonderful that the world needs 19 of their damn progeny? I may be a liberal but I believe in birth control and I find this shit nasty. Have as many kids as god allows? If you don't use birth control and you fuck and fuck you're going to wind up with a shitload of rugrats. That has nothing to do with any god.

You people make me laugh. You come across as a sad, bitter, pathetic group. Just remember this; my goal is to have a baby for every gun I own, and that's a lot. I'm glad you hate people like the Duggars.I'm ambivalent towards them, but I guess the fact that they send idiots like you into venomous rants makes me add to the "like" category. I also love how you talk about "use more resources than should be allowed". I'll use whatever I damn well want and there isn't a damn thing you can do about it BECAUSE THEY'RE NOT YOURS. Nobody gives a shit about you and your claim to this Earth. I am comforted in knowing that eventually with your lack of procreation, your miserable, sad, genes will not be passed to any offspring, ridding the planet once and for all of your sorry selves. Cheers.

That is a HILARIOUS comment, Anonymous. I'm glad you don't give a shit, so much so that you felt you had to write over a hundred words to describe the exact not-giving-a-shit feeling you have. Nice one. Thanks for the laugh!

White trash? They are an insult to white trash throughout the world!

I don't like how they treat their kids, especially little Jordyn and preemie Josie. They ignored Jordyn even though she is very cute and sweet! Precocious Johannah and fretful Jennifer are front and center in that family and Jordyn gets lost in the shuffle. I would not take my toddler who was born premature on a trip to the UK and Israel especially with the temperature extremes, strange foods, and people and animals who may have questionable hygiene. No wonder Josie got sick in Israel! Her little lungs couldn't handle the change in atmosphere!

Fuck you Lucee. Wv is not bad. Visit it. I am from there, college educated with no children, nor plans for any. Atheist, from the country but don't hunt. Please do not generalize. It makes you seem stupid. Yes the duggars are trash and sickening. I wish them no good will except their poor kids.