Okay, that’s an exaggeration. Perhaps of epic proportions. But a funny side story of the season finale of ANTM is that the sound went out on my HD channel during DVR-ing, and we had to watch the last 20 minutes with no sound, which actually turned out to be kind of a relief. 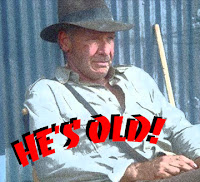 Okay, here’s another pop prediction: INDIANA JONES AND THE KINGDOM OF THE CRYSTAL SKULL is going to be one of the, if not the biggest disappointments of the summer, both critically and financially (I mean, did anyone really expect SPEED RACER to do okay?). Not to fall into the realm of the idiotic IMDb posters who review films before they’ve seen them, but, to quote another Harrison Ford character, “I’ve got a bad feeling about this.”

For one thing, I think it’s a huge mistake for the film’s advertising to frequently point out how OLD Indiana Jones is. That may play with those of us who remember when the first film came out (having aged over two and a half decades since then ourselves), but it’s the wrong tack if they’re trying to pull an audience away from GRAND THEFT AUTO IV. Stephen Colbert’s gag about INDIANA JONES AND THE WHEEL OF FORTUNE rings painfully true to the ear.

But another problem may turn out to be the film’s inspiration. From what I’ve read, this movie is more of an homage to ‘50s sci-fi films than adventure serials. Personally, I like the idea, and it makes sense in terms of the time between the production of the films and their internal calendar. But the general audience doesn’t have the kind of affinity for movies like THEM! or FORBIDDEN PLANET that film junkies do. Then again, they didn’t give a crap about ‘40s serials back in 1981, either, so who knows. But I think it bodes ill for the movie when its biggest draw for the young’uns is the presence of Shia LaBoeuf. Labeouf. LaBeef? Ah, who cares.... kids these days!

Shia LaBeouf is a good kisser.