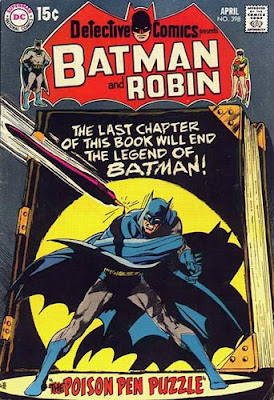 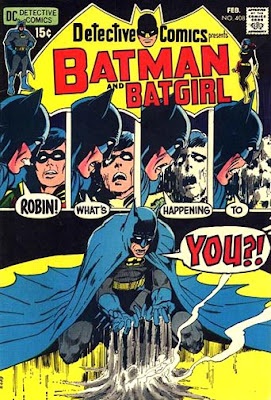 It seems that over the years of my interweb posting, I’ve not written that much about Batman (as opposed to Superman, whom I believe I’ve mentioned a few times). I did a REWIND column in 2005 about how shitty Tim Burton’s BATMAN was (an opinion I hold like a cause), but for the most part, my thoughts on the caped crusader have been kept to a minimum.

It’s not that I don’t love Batman. I do. I think he’s the yin to Superman’s yang, a really interesting character that’s infinitely appealing and remarkably adaptable to different interpretations and media. As a kid, Batman came a very close second to Supes in my geeky heart. I think the reason I’ve kept mostly mum about Bats is that he doesn’t need my help.

Unlike Superman, people GET Batman. Batman’s iconic cool status is pretty much unchallenged, and even people who think superheroes are stupid are amenable to his exploits.

But with THE DARK KNIGHT approaching, I thought it might be time to take Bronze Beauties into the Batcave for a look at some of the (many, many, many) terrific comic book covers that graced the character’s books in the 1970s.

Batman made his debut in DETECTIVE COMICS #27 in 1939, in a story credited to one Rob’t Kane, although history has gone to tell that Batman’s creation was in fact a collaborative effort between the marginally-talented (but supremely egotistical) Kane and writer Bill Finger (with artist Jerry Robinson quickly refining and adding key elements to the legend). [See HERE for a fascinating look at the still-too-secret origin of the Batman]

While Batman was an instant smash, superheroes fell out of favor after WWII and comics moved towards other genres, with the few remaining costumed crimefighters trying to adapt. From the 1950s onward, Batman comics became light and silly, bringing in elements of science fiction which ill-fit the character. Finally, in 1964, as sales continued to sink, new editor Julius Schwartz made the decision to bring Batman back to his roots, encouraging his writers to emphasize the detective aspect of the hero and enlisting artist Carmine Infantino to help give Batman a modern, sleek,"new look."

The revamp was somewhat dampened in 1966 by the success of the BATMAN TV show, whose campy tone was foisted upon the source material by the DC Comics suits (the company has a long, sad tradition of letting movie and TV adaptations be the tails that wag the dogs). After Batmania subsided a few years later, maverick writers such as Denny O’Neil, Len Wein and Marv Wolfman successfully re-darkened the Dark Knight with grim stories featuring moody, naturalistic art most notably by Neal Adams. Adams’ striking covers in particular had perhaps more impact on the character than any visual interpretation up to that point.

DETECTIVE COMICS #398 (April 1970) has special resonance to me as it’s one of the very first comic books I owned. To this day, almost four decades later, I can remember the feeling of awe I had at first glimpse of this spectacular Neal Adams cover on the spinning rack at Thrift Drug (my first pusher). As was often the case in the day, the story inside didn’t quite measure up to the promise of the cover, but no matter. I was hooked, and Neal Adams quickly became my first favorite artist.

DETECTIVE #408 (Feb. 1971) lives up to its Adams cover, with a creepy haunted house story that taps into the Batman’s greatest fears (a disintegrating Robin being just one of them, alongside Superman not giving him any respect!). Everything about this cover works for me: The art, the tilted logo, the masthead figures of Batman and Batgirl, the placement of the word balloons, the yellow-black-blue color scheme, to me, comics never looked better than this (be prepared to witness more Adams as this series continues).