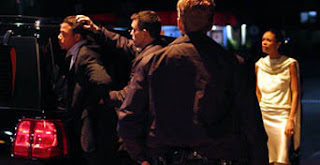 As of today, I have paid over $500.00 for the honor of merely having my job, while being made to feel like a criminal for the fifth time in ten years.

A chunk of Hoboken bureaucratic bullshit known as THE BAR CARD requires bar and restaurant employees in our little mile square to pay $110.25 every two years for a card that allows them to work in the proximity of booze. There’s no reason for its existence other than to add to the city’s coffers, and why those of us who work in one of its most profitable and ubiquitous industries are singled out remains a mystery that nobody’s every been able to answer for me. I think the simple reason is “Because they can.”

As if it doesn’t suck enough to have to pay for the privilege of having a job, the police at the window where you fill out your forms and pay your money (two different money orders, thank you very much) invariably treat you like a criminal. And I don’t just mean because you have to be photographed and fingerprinted (as far as I know, my fingerprints haven’t changed in the past ten years, but they now have five sets of them). The impatient, gruff attitude that these peace officers display towards us bartenders, waiters and security peeps just enhances my opinion that many (if not most) cops…. are jerks.

I know, I know, you’re not allowed to say that in our post-9/11 world where police officers, firefighters and the military are our unchallenged HEROES. To question their motives or behavior is verboten (even after Abu Ghraib). And yet, we have to. About the only thought-provoking thing I ever saw Andy Rooney say was a statement he made in 2004 along the lines of “I was in the Army. And I can tell you that not all soldiers are heroes.” (Actually, his wording was awkward, saying "all soldiers are not heroes," but the meaning is obvious). 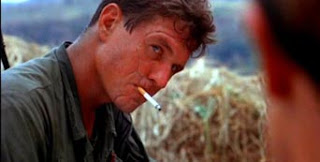 The fact is, many people join the military because they don’t have any other option. Jobs are scarce, and lots of them have three kids to support by the time they’re 20 (don’t get me started on THAT). The armed forces are pretty much the only job that any young person in America is practically guaranteed. And then there are those soldiers for whom military service is a legacy, something they’re not even allowed to question (a phenomenon also common with cops and firemen). Some people enlist as a last ditch effort to straighten out lives of crime or addiction. And, sadly, but undeniably, some people join up in the hopes that they will be able to kill other people.

Does this make their sacrifice worthless? Of course not. Regardless of the impetus, they’re still taking a risk that my tiny, wussy balls would never dare and, as much as I hate its dominance of our federal budget and policy, I am well aware of the necessity of a military. (I do NOT however, buy the tag line that they are necessarily protecting “our freedom.” Under our current, criminal administration, they are tragically risking their lives to protect corporate interests more than anything else. That’s not their fault, but it’s something that everyone, especially those who serve and their loved ones should be furious about).

As for fire fighters, I have nothing bad to say. That is a truly honorable, brave job that requires a level of sacrifice and selflessness that most people don’t possess. If there were a God, I’d ask him to bless ‘em.

Cops are like teachers in that there are two very distinct and disparate types of people who enter both professions. With teachers, you have two extremes: (1) People who realize how supremely important the job is, and who are on a mission to make the world a better place by giving children a GOOD education. These are among the most important people on Earth. Conversely, there are (2) People with no real passion for anything who couldn’t figure out a major in college. So they become teachers. Bad ones, who ultimately do more harm than good. We all can, in retrospect especially, remember which teachers taught and which ones could give a shit.

With cops, the two types are even further apart. There are many police officers who joined the force because they genuinely want to “serve and protect” the public. To those brave, honorable men and women, I tip my nonexistent hat and say “Thanks.”

But my experience over the years, along with that of my friends, has been that many of the boys and girls in blue are little more than government-authorized bullies, people who wanted to have a job where they could mess with people, ignore the rules of society, abuse power and get away with all of it. Free coffee is the mere tip of the iceberg. Even just in the context of a bar, lots of us have seen cops flash a badge in lieu of paying a cover charge (and go ahead and dare to refuse it as admission). Especially for those of us who live in an urban environment, it’s hard to find a person who doesn’t have a story about a cop abusing authority, be it as minor as parking wherever they want or as major as roughing someone up unnecessarily. But we’ve ALL witnessed the swaggering arrogance of some bad lieutenants. And the fact that it even makes me a wee bit nervous to merely WRITE THIS DOWN is proof of the pudding (I always wanted to use that phrase).

One mo’ time, I’m not saying ALL police are jerks. But to ascribe universal altruism and unassailable valor to the entirety of law enforcement is not only naive, it’s stupid, and endemic of an ever-spreading tendency in our society to question NOTHING, especially authority. Which is not only dangerous and short-sighted, it’s downright un-American.

Phew. Okay, don’t worry, next week I’ll get back to talking about heroes who wear spandex and are much less complicated. Yay!

Email ThisBlogThis!Share to TwitterShare to FacebookShare to Pinterest
Labels: for real, jerks

Hey maaaaan, I support our troops. If you don't like America, go back to Russia, ya faggot.