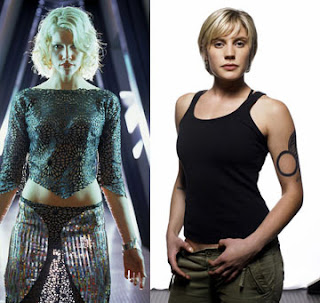 I’m (along with the gyrlfriend) just getting into BATTLESTAR GALACTICA. Like so many serial shows these days, you can’t jump into BSG if you haven’t been watching from the beginning (some day I’ll need to do the same with LOST). And for some reason (perhaps my distaste for the source material, which I hated at the time), I had no interest in this Sci-Fi series. My mistake. After hearing too many people whose taste I trust rave about the show, I decided it was time to get caught up. So Y and I began renting BSG and quickly got hooked on its novel take on science fiction (both in story and design… BSG features the best battle sequences in SF history).

Sure, there are problems. We’re currently three episodes into Season 2.5 and I’m frankly sick of Adama bawling all the time. The “Final Cut” episode was utterly unbelievable and too many characters have been snatched from the brink of death to keep the drama sharp (and the Cylons are really, really lousy shots).

But my biggest beef with BSG is the acting. Tricia Helfer’s jaw-clenching Cylon No.6 would drive me crazy if she were in my head all the time, too. Why does she speak like she’s handling a ventriloquist dummy, keeping her teeth closed, over-pronunciating her sharp consonants, hissing every line? I know she’s supposed to be evil, but it’s beyond grating. Jamie Bamber as Apollo is so boring I almost nod off every time he’s on screen. But worst of all, Katee Sackhoff as Starbuck epitomizes my most hated stripe of performer: The OVER-ACTOR: That overtly self-conscious thespian whose every acting choice, verbal and physical is carefully planned. Watching Sackhoff’s performance, you can tell that she’s thought about every nuance, every inflection of every word, every bite of the lip, every… single… movement. There’s nothing natural about her performance at all, and every time she’s on screen, I never forget that I’m watching someone ACTING (to quote Steve Carell’s Michael Scott quoting Jon Lovitz’s Master Thespian).

Of course, she’s far from alone: Alyssa Milano. Hilary Swank. Most soap opera stars. Brad Pitt. Jennifer Jason Leigh. And of course, Kevin Kline and the many theater-bred actors who somehow never realize the different requirements of acting for the stage (where overacting can be necessary to project to an audience) and the screen. To me, the most annoying practitioner of this is Kevin Spacey.

In every performance and every appearance, you can smell how impressed Spacey is with himself. If you watch him on talk shows, he’ll pull impressions out of his hat that aren’t that good, then beam with self-satisfaction. He is an actor who is always concerned with impressing the audience at how actorly his acting is. And so you never forget that it’s him and not his character. Try watching THE USUAL SUSPECTS today and see if you can believe that he’s Verbal Kint OR Keyser Söze! 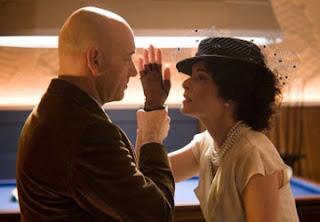 There’s an early Spacey moment in SUPERMAN RETURNS that bothers me every time I see the movie. During the scene on the Gertrude where Lex Luthor is talking to Kitty Kowalski (the similarly overacting Parker Posey) about Prometheus and the history of power on Earth, he climbs the spiral staircase and says, “I just wanna bring fire to the people,” then pauses, and says , “And… I want my cut.” But it’s a physical bit that Spacey does during the pause that grates me every time… he slowly slides his hand along the banister of the staircase. It sounds like no big deal, but trust me, it’s distractingly actorly.

Spacey’s Bobby Darin biopic, BEYOND THE SEA (which he wrote, directed and starred in) is fascinating because it’s the work of a wannabe auteur who’s not half as good as he thinks he is telling the story of a wannabe auteur who wasn’t half as good as he thought he was. Bobby Darin had his moments, to be sure. I think “As Long as I’m Singin’” is one swingin’ chunk of vinyl. But for the most part, his music was bland piffle (“Splish Splash?” Ew. And sorry, his “Mack the Knife” pales to versions by Ella, Louis and pretty much anyone else who ever tackled the Weill standard) and his acting utterly forgettable. Darin, despite what he and Spacey thought, never came close to the sheer star power and virtuosity of Frank Sinatra, as Kevin Spacey is no Jack Lemmon or Johnny Carson. What Spacey and Darin share is that tendency to overthink every creative choice.

We can argue later about how much I disagree with your assessment of the acting on BG. I think the cast is uniformly strong. I also think Helfer does a damned fine job in her various iterations of "6".

But I'm glad you are liking it for the most part.

You left out Al Pacino. When he's good, he's very good, but when he's bad, oh mama, hide the set dressing because he's going to chew up the scenery. "Heat", anyone? "Scent of a Woman"? Dare I say... "Devi's Advocate"? Wow.

Uniformly strong? Nicki Clyne? Yes, debate we will. I will do impressions. And we shall do the having of the fun.

I'm 100% with on Beyond the Sea. It's a fascinating failure. And I love the sets, natch.

Just stumbled upon this, I agree with a lot about what you say about the BSG-cast. I'm not a big fan of Starbuck, but it's funny that you say that you feel like she is too prepared/has thought through her performance too much, when it seems her approach to acting is the complete opposite. From everything I've read about her (interviews with her and others from the cast) she barely reads her lines before filming and basically goes with the flow and ad libs a lot. So I think that what comes across as calculated acting is just the way she acts, naturally... the way the actress is. I don't know, but knowing that helped me to be less annoyed with the character at times, not sure if it helps your perspective.