THE COLBERT REPORT recently featured a hilarious story about a Sean Hannity Fox News Report on America’s awesomeness in which he proclaimed, repeatedly (I shit you not) that the USA is (and I quote verbatim, honest) “THE GREATEST, BEST COUNTRY GOD HAS EVER GIVEN MAN ON THE FACE OF THE EARTH!”

Now, the fourth grade phrasing of the sentiment aside, upon exactly what is Hannity basing this conjecture? Our disastrously low world rankings in education, health care, environmental issues, literacy, GNP, healthy life expectancy, exports and world opinion? Oh, maybe he’s talking about how much we kick ass when it comes to gun ownership, national debt, obesity and energy consumption. Oh, and being able to transmute serious subjects into hollow rhetoric. At that, we stand unparalleled. 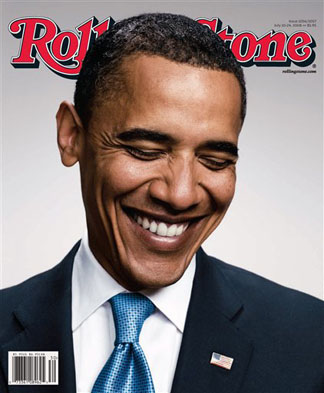 The new issue of ROLLING STONE features an interview with Barack Obama by Jann Wenner. The relatively short Q&A touches on Obama’s primary agenda, his relationship to pop culture and the kind of campaign that is no doubt just amping up. I’m sure we have just begun to hear about his secret Muslim leanings, his lack of patriotism, his drug use and of course, the hidden subtext of the terrorist fist jab!!

The “Lack of Patriotism” tag cracks me up in particular. Why is it I’ve never seen a member of the DNC refuting this ludicrous charge by pointing out the simple fact that THE GUY IS RUNNING FOR PRESIDENT. Seems as if being a patriot is kinda a prerequisite for even choosing to enter that particular arena. Oh, but he didn’t put his hand over his heart during the Pledge and he only recently started sporting that all-important gauge of national fidelity, the FLAG PIN!

I love the cover of the RS issue. It can certainly be interpreted a number of ways, but I like to look at it as Barack Obama chuckling over the absurdity of this meaningless piece of jewelry that he ultimately decided is not worth fighting over. Because it is meaningless. A flag is merely a symbol, and symbols are desecrated by the hypocritical actions of their followers ALL THE TIME. To my mind, trying to ban flag burning is every bit as antithetical to the meaning of that symbol as the act itself. That those nominal “patriots” who would alter the Constitution to LIMIT a freedom (the nation defining, and hard-to-reinterpret-to-counter-the-argument-that-increased-technology-renders-it-anachronistic 1st Amendment) can’t understand the true meaning and importance of freedom is truly sad to me. There are hundreds of American politicians who stick a flag pin on their clothing and then go to work and betray their oath of office every single day. Implying that Obama doesn’t love America because he didn’t wear a flag pin is as ridiculously superficial as attacking someone for their haircut or cleavage.

Now, I realize that imagining that Obama is laughing AT the flag pin only buys into that other accusation that drives me to distraction, that of his supposed ELITISM. If “elite” is construed to mean “the best in a particular group” then I Goddamn hope he’s an elitist! To paraphrase Bill Maher, look at what seven and a half years of our current mouth-breather have given us! Don’t we WANT a President who’s BETTER than we are? Smarter? Stronger? Faster? Oh, wait, that’s the Six Million Dollar Man. Still, you get the point.

As a rule, I don’t get excited about things before they happen just because I’m cynical enough to assume the worst. A life of low expectations yields fewer letdowns and makes the triumphs that much sweeter. I don’t consider Obama a lock for November by any stretch. I do feel that for a large group of Americans, all that matters is the traditional God, Guns and Guts (screw any substantive discourse, and don’t even talk about sacrifice!). As the election draws closer, the mudslinging aimed at Barack Obama will make John Kerry’s campaign look like a tiptoe through the tulips. And for those who dig no deeper than an ignorant shouting point, the mud could stick. After all, a lot of Americans “have had ENUF of HOO-Sane!”

But unlike John Kerry (who ran a campaign so inept I couldn’t decide whether to be angry or embarrassed), thus far Obama has risen above the fray, chosen his battles carefully and stuck to message. He’s brave enough to admit when he’s changed his mind about something (such as public financing, and before you accuse him of flip flopping, ask yourself: When was the last time you checked the “donate” box on your income tax return?) and sincere enough that he won’t back down on some tough medicine that we all need to take (to steal from the right, “freedom ain’t free!”). 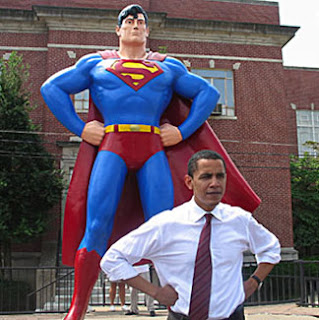 And heck, he even knows how to use modern technology! Ain’t that a hoot!

My fingers are crossed. Money has been donated. Opinions have been shouted, both sober and hooch-amplified. I remain a cynic, but never so much as to surrender. And I genuinely believe that Barack Obama is maybe our only chance of repairing the incalculable damage done by the current administration to the Greatest, Best Country God Has Ever Given Man on the Face of the Earth.

Here’s to Hope. Here’s to Change.