Marvel & DC Slugging It Out on the Big Screen!

With Iron Man 2, Kick-Ass, The Losers and Jonah Hex all hitting the multiplex this summer, the onslaught of comic book movies shows no signs of slowing (for better or worse). Leaving the Green Hornet (who started as a radio show) and Scott Pilgrim (indie press slacker hero) for later debate, we’ll get you up to speed on the heavy hitters from comics’ Big Two, DC and Marvel that are heading to the big screen in the next few years, culminating (supposedly) in epic team-ups for both universes! 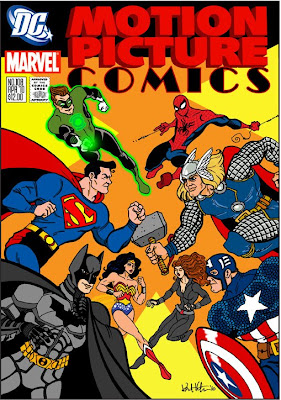 MARVEL COMICS:
THOR (May 2011)
Kenneth Branagh is directing Chris Hemsworth (Captain Kirk’s father in Star Trek) as the Norse God of Thunder, another creation from the Stan Lee / Jack Kirby juggernaut of the 1960s. In the movie, the arrogant Mjolnir-wielding warrior is sent to Earth by his father, Odin (Anthony Hopkins) to learn some humility, and ends up protecting us from an invasion led by his evil half-brother, Loki (Tom Hiddleston). Expect some major battle action and cosmic scenery in this one.

THE FIRST AVENGER: CAPTAIN AMERICA (July 2011)
First debuting in 1941, Cap is considered the moral cornerstone of the Marvel Universe, so there’s a lot riding on the Joe Johnston-helmed flick, spanning WWII through today. Casting Chris Evans as the hero seems risky, and not just because he’s already played a major Marvel character (The Human Torch in the Fantastic Four movies); the smart-alecky Evans doesn’t have the inherent heft of say, Mark Valley (TV’s Human Target) or Jon Hamm (Mad Men), but Marvelites are hoping for the best.

THE AVENGERS (May 2012)
Captain America’s solo film is the final building block needed for The Avengers, the Marvel supergroup comprised of Cap, Thor, Iron Man and other heroes, presumably uniting to reign in an out-of-control Incredible Hulk (Edward Norton reprising? Maybe.). Sam Jackson’s Nick Fury is the uniter, and no doubt other B-list heroes (the Black Widow? Hawkeye? Ant Man?) will round out the roster in the ultimate superhero blockbuster. Joss Whedon (Buffy the Vampire Slayer, Firefly) has just been confirmed as director.

SPIDER-MAN (2012)
Non-fanboys may find it odd that Marvel’s most popular character won’t be in The Avengers, but in the comics, Spidey’s traditionally been a loner. Besides, this reboot (to be directed by music video director Marc Webb) puts Peter Parker back in high school, still a little too wet behind the webbed ears to play with the big boys. Nobody’s been cast yet, and there are fears amongst the fanboys this movie will try to appeal to the teen set.

X-MEN FIRST CLASS (2011)
After the commercially successful, but critically-drubbed X-Men: The Last Stand and X-Men Origins: Wolverine, Marvel’s mutant franchise is in a state of disarray, with numerous films in various stages of development. First Class would be a sort of “X-Men Begins” taking us back to the first group of mutants brought together by Professor X. Bryan Singer was at one point slated to direct, but now is listed as producer on the film. Meanwhile, X-Men Origins: Magneto, X4, another Wolverine film and a Deadpool spinoff are all on the potential slate.

ANT MAN (TBD)
One of Marvel’s smallest (literally and figuratively) characters has been in development for years, with Shaun of the Dead’s Simon Pegg slated to direct. While most fanboys fear a less-than-reverent treatment of the shrinking scientist, we relish the thought of Pegg’s snarky sense of humor being attached to a somewhat silly character.

SUPERMAN: THE MAN OF STEEL (2013)
After Bryan Singer’s Superman Returns proved to be a letdown, Warner Bros. turned to Batman rebooter Christopher Nolan to oversee a new film version of the quintessential superhero. At this point, the movie is being written by David S. Goyer and Jonathan Nolan (with nobody cast, nor a director selected), reportedly featuring Lex Luthor (again) and the alien android Brainiac in a story that focuses on Kal-El’s Kryptonian heritage.

BATMAN (July 2012)
After the smash commercial and critical successes of Batman Begins and The Dark Knight, Christopher Nolan’s return to Gotham City brings a sigh of relief for Batfans. While no villains have been confirmed, rumors swirl about Catwoman (Kate Beckinsale? Angelina Jolie?) and the Riddler (Johnny Depp?). What’s most intriguing is Nolan’s declaration that this “final film” will bring a conclusion to the story, in stark contrast to the infinite milieu of the comics. Could this be the end of the Caped Crusader?

SHAZAM! (TBD)
The character of Captain Marvel (Shazam is the name of the wizard who gave the hero his powers) has been in development off and on for about a decade. In the wake of The Dark Knight, Warner Bros. seems to feel that every superhero movie has to be dark and serious, but this whimsical, light character has always had a hard time being adapted to a serious tone. Time will tell what route an inevitable film takes (we’re hoping for light).

JUSTICE LEAGUE (TBD)
With The Flash, Wonder Woman and Aquaman also in development, DC plans to follow Marvel’s lead and eventually produce an epic film of their superhero group, the Justice League (of America). In 2007, Director George Miller was hard at work on the film, which was tabled in favor of establishing the individual characters in solo films before teaming them up. But following Marvel’s lead may not be the best take for the League, as Christian Bale’s über-realistic Batman just wouldn’t work in a movie alongside aliens and super powered adversaries. Besides, at this point, waiting until every member of the roster has his or her own film to lead into a Justice League movie would take probably a decade at least. If Warner is hot to make a super-team film, they should treat it as its own unique entity. After all, different versions of their characters already exist simultaneously in various media. It wouldn’t necessarily dilute the strength of Batman to have two different versions of the hero on film.