An Open Letter to Christopher Nolan on Rebooting Superman

Congratulations on being handed the reins of one of Warner Bros.' most valuable properties, albeit one that seems to cause no small amount of creative consternation.

Relax, Mr. Nolan, I'm here to give you and the team you'll select advice on how to handle Superman.
I'm one of many fanboys who was, let's say underwhelmed with SUPERMAN RETURNS

as a springboard wasn't necessarily a BAD idea, but Bryan Singer and his writers, despite the best intentions, created a movie not exciting and inspiring, but ill-conceived and waaaay too mopey.

There were lots of mistakes. Superman abandoning Earth for five years was dumb. Giving Lois Lane a kid was REALLY dumb. There wasn't enough action. Some of the casting could've been better. But the movie's biggest problem was that, unlike Donner's film, SUPERMAN RETURNS didn't GET the character.

Chris, here's the thing to remember: unlike Batman (with whom you've done brilliant work

), Superman is not tormented, conflicted, nor in any way DARK. Yes, Kal-El is the orphan of an entire world; yes, he has sacrificed a normal life in order to help mankind (side note: I'm one of those who chooses to pretend that the marriage of Clark Kent & Lois Lane in the comics is a temporary aberration in the overall legend). But he has no angst. In fact, he's a pretty well-adjusted guy.

Therein lies the paradox that eludes most people: What makes Superman interesting is how he is absolutely UNcorrupted by his absolute power. He could rule the world, but all he wants to do is help. It's not a conflict. For Kal/Clark/Superman, there was never any other choice. He's not vain, he's not arrogant (remember, the S-shield is his family crest; he didn't name himself Superman). This utter selflessness is what drives power-mad narcissists like Lex Luthor crazy.

But let's talk about what a Superman movie SHOULD be in this era of unlimited digital effects and serious superhero films.

The first step is choosing the right villain. SUPERMAN RETURNS may have shot itself in the foot by using Lex Luthor as its bad guy. Luthor may be Supes' arch-enemy, but he's not exactly a spectacular character. To reach modern movie expectations, the Man of Steel needs to do battle with one of his more cosmic foes. Brainiac, the alien android who collects civilizations around the universe could work. If Lex Luthor has to return, maybe he could be responsible for the creation of Bizarro, the Superman-clone gone awry.

(Oh, and since Warner will no doubt demand more than one enemy for merchandising purposes, please take a note from James Bond

: Use a B-lister like Toyman or Silver Banshee in a pre-credits action sequence that requires no exposition and doesn't muddle up the main story… that NO superhero movie has done this boggles my mind.)

But for the primary adversary, I think the best choice is the massively powerful and sinister über-villain Darkseid. Created by comics genius Jack Kirby in 1970, the character's complex back story would have to be simplified for a movie, but at the core, the notion of an alien despot bringing an army of parademons and super powered baddies to conquer the Earth sounds like a pretty cool movie to me. The main thing is, for a successful reboot, Superman needs an adversary he can CLOBBER.

One of the problems with SUPERMAN RETURNS is that Superman was always being REACTIVE; he caught, deflected, repelled, etc., but never threw one punch. The giant machine gun sequence ended with the implication that super-butt-kicking was about to take place, but we didn't SEE it! And the only scene to feature a Superman-Luthor confrontation had our hero getting the crap beat out of him! Aside from the plane scene, there wasn't much to cheer in SUPERMAN RETURNS.

In fact, SUPERMAN RETURNS may be the SADDEST superhero movie of all time. Not that a Superman film should be a comedy (as SUPERMAN III

painfully proved), but there needs to be a sense of whimsy amidst the adventure. 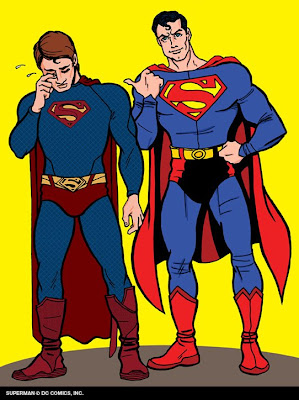 It wasn't just the tone that was too dark in SUPERMAN RETURNS; while Bryan Singer vociferously defended the decision to make Superman's costume darker and more complicated, it was another wrong move. In his 1978 film, Richard Donner wisely embraced the bright elements of the character (both literal and figurative), knowing that while they may empirically be corny, you don't mess with an icon. Cynics and hipsters may mock Superman for his goody-goody image, but he appeals to the id, to our innate desire to see good triumph over evil… his primary status as the quintessential superhero is visually represented by the primary colors of his costume: red, blue and yellow, not maroon, blue and gold. Go ahead and do some slight tweaking (the blue is up to you), but don't go crazy with superfluous design (oh, and while it may seem inconsequential, please note: Clark Kent's black hair is parted on the right; as Superman, the part is on the left, allowing for the trademark S-curl… Singer screwed that up, too). And Chris… the red shorts stay.

One thing that Singer got right was casting another unknown in the lead (Brandon Routh was fine, if lacking the laid back masculine charm of Christopher Reeve, but those were big red boots to fill). Unlike with masked heroes like Spider-Man or Batman, suspension of disbelief is needed to accept that it's Superman onscreen, not a well-known actor in a Superman costume (and don't cast too young). When it comes to the female lead, please pick someone more consequential than the slight Kate Bosworth. Lois has to be ballsy and formidable in addition to beautiful… see if Evangeline Lilly or Zooey Deschanel is available. I trust that you'll avoid any stunt casting… we don't want to see some American Idol castoff as Jimmy Olsen.

The bottom line is, as you've done so well with Batman, and as Richard Donner did with Superman, make sure that whomever ends up directing the next Superman TRUSTS the spirit of the source material. There's no need to retell the origin, everybody knows the basic background of the Last Son of Krypton. There is a real opportunity to make the most spectacular superhero movie of all… the raw materials are there, many of them remarkably untapped; the (super) ball's in your court.