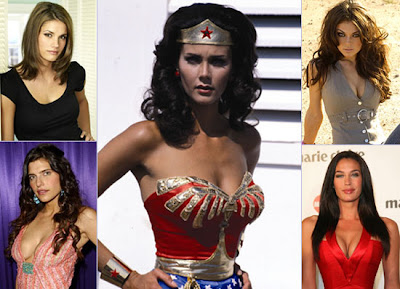 I realize that this glob is fast becoming "Karl Talks About Superhero Movies and TV Shows," but here's another Starpulse link to a piece I wrote giving some casting suggestions for David E. Kelley's announced new WONDER WOMAN

TV show. As my pal John pointed out, Kelley's not exactly known for casting Amazonian female leads, so it remains to be seen whether or not Diana will be a Hollipop.

But it did get me thinking about Jim Lee's Wonder Woman costume revamp from earlier this year. DC Comics is notorious for altering their comics to fit media adaptations. In the 1970s, Billy Batston started tooling around in an RV with Uncle Dudley in a weird echo of Filmation's SHAZAM! TV series and Green Lantern John Stewart's costume was changed to fit the JUSTICE LEAGUE

About a year ago, Warner Bros. (DC Comics' parent company) formed DC Entertainment in an attempt to bring more superhero synergy and catch up to Marvel Comics' success rate on the big screen. In the year since, there's been much restructuring at DC and the future of the company is anybody's guess (although I think their recent move to lower comic book prices was a good one.... one of the big things keeping me away from the comic stores was a $5.00 price tag on a regular comic). 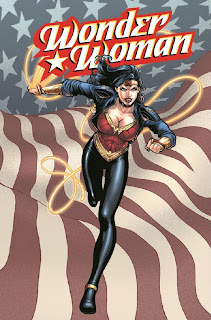 But I'm cynical enough to wonder if maybe the whole costume change for everybody's favorite Amazon Princess happened because DC knew that in a few months there was going to be a public announcement of a new WW TV show. It's easy to imagine a production company saying they were interested in bringing the character back to television, but (like Joss Whedon when he was writing his ill-fated Wonder Woman movie some years ago), didn't want to use the red, white and blue spandex. DC knows that when you mess around with someone as iconic as Wonder Woman

, any alteration is bound to be controversial (while bringing about the no-such-thing-as-bad publicity). The last time Diana's costume had a major makeover was 1982, when the eagle she'd sported on her chest since 1941 was replaced with an easier-to-trademark stylized WW. Even that subtle alteration caused ripples with the fans (although of course, not as much as when she gave up her powers altogether in the early 1970s to become a martial-arts wielding Emma Peel type). But to radically alter the look of one of the so-called DC Trinity

because of a TV show would not go over too well with the fanboys.

But if the costume were changed in the comics FIRST and then later used on TV? Well, who could cry foul at that?

Just a theory. Let's wait and see. But JESUS, that's an ugly costume.