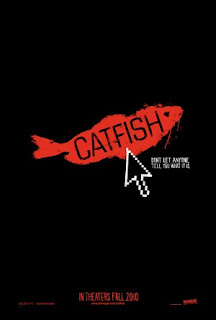 I saw the movie CATFISH the other day. You know, “the other Facebook movie” (besides THE SOCIAL NETWORK). I went in with a little bit of knowledge about it: Guy meets girl online, travels to meet her, drama unfolds. I knew that it was being presented as a documentary, but for some reason I had it in my head that it might’ve been bullshit. Maybe it was the über-dramatic tone of the commercials in contrast with the predictable outcome of the setup. Maybe it was something I’d heard or read. Or maybe I just have a really good bullshit detector.

Because I am utterly convinced that this movie is at least 90% bullshit.

In a spoilerish nutshell, CATFISH is about Yaniv “Nev” Schulman, a New York photographer who shares a studio with his filmmaker brother Ariel and their friend Henry Joost. When one of Nev’s photographs is published in a newspaper, he receives a painting of the photo from a little Midwestern girl named Abby. Nev develops a long distance, mostly virtual friendship with the girl and her family, including mother Angela and 19 year old sister, Megan. Through Facebook, Nev and Megan develop a long-distance relationship, but when Nev and his pals drop by the family’s house in Michigan, they discover that the entire interaction has been a lie concocted by Angela, who did the paintings herself, posed as Megan and does not live the kind of life she presented to Nev.

From the very outset, this whole thing felt staged. There’s no real reason given to the impetus for filming Nev’s life other than his brother finds him “interesting” (well, that makes one person). The dialogue… er, conversations of the three protagonists feels as forced as anything in a Kevin Smith movie. Leaps in logic abound: Especially for a movie about how modern technology has altered our interactions with other people, it’s a bit of a stretch to imagine Nev didn’t immediately Google the supposed 8-year old artistic prodigy and debunk Angela’s story. A postcard with a smashed penny attached is mailed to Megan for no reason whatsoever other than to serve as an unlikely callback prop later in the film. Lines like “Your voice is not at all what I expected” are pure setup. And a final monologue from Angela’s clueless husband that gives the film its title is so unbelievable I actually laughed out loud. 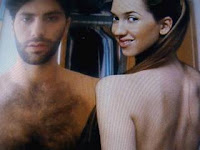 There are two possibilities here. One is that three douchebag (I’m sorry, Nev has a tribal trampstamp; No non-douchebags get tribal trampstamps) wannabe actors / filmmakers set out to create a BLAIR WITCH PROJECT about the internet and recruit people to be a part of it.

The second, more likely possibility is some kind of mixture of reality and fiction. Perhaps Nev really did receive a painting in the mail from Angela claiming (for whatever reason) to be a small girl. And then maybe (unlike in the movie) the media-savvy Nev quickly (and easily) used the internet to debunk her story. Maybe Angela really is a somewhat sad, mildly disturbed, struggling artist who lives with her husband and his two severely retarded teenage boys (one of whom died shortly after the film was shot) and kinda wishes her life had turned out differently. And maybe Nev and his pals decided to exploit that and craft a “documentary” exposing this sad woman in the guise of making a revealing statement about social media and our culture (for those of you who weren’t paying attention for the past decade).

I’m all for stirring shit up. I’m also okay with elaborate media hoaxes if they’re entertaining and artful. Andy Kaufman was a genius (Joaquin Phonenix, not so much). I actually liked THE BLAIR WITCH PROJECT

, I thought it made amazing use of its economy of imagery and believed the performances (for better or worse, Heather Donahue reminded me of someone I used to know). But that film was very much a product of its time. I doubt it would or could work as believably today. The internet has made it nearly impossible for anyone to keep the wool pulled over anyone’s eyes for more than the time it takes to do a Google search.

The bottom line is, regardless of which scenario is true (the only possibility I refuse to accept is that the story unfolded as presented), CATFISH is not a good movie. There are a few interesting visual touches (such as using Google Earth to depict the distances between the boys and their quarry) that are going to age as nice time capsules, but that’s certainly not enough to recommend the film. At the end, I stood up and asked aloud, “Did ANYONE buy that for a second?” but not one person answered me. Whether it was because they disagreed or were just scared of the agitated guy barking in a Manhattan movie theater, I have no idea.

Which is why, in order to get my distaste for CATFISH off my chest, I turn to the internet. And as soon as this is posted, I’ll link to it on Facebook. Ooh, maybe I’ll see if Nev wants to be friends with me.

Nah, probably not.
No comments: