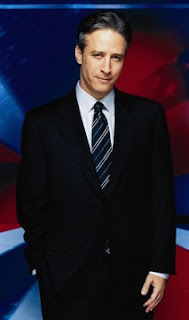 One Sunday in May of 2009, some friends and I were having dinner at Cowgirl (formerly the Cowgirl Hall of Fame until the museum of the same name in Fort Worth, Texas forced an official change), a western grub-n-hooch hangout in New York’s west village, when we noticed that Jon Stewart and his family were dining at a booth near our table.

Now, normally, I’m completely averse to the practice of celebrity free rides. It makes absolutely no sense that the richest, most overpaid people in the world constantly receive gift bags worth thousands of dollars, free admission to anywhere and anything, and bar tabs that usually amount to an autograph and a tip.

But this was Jon Stewart, stalwart host of THE DAILY SHOW, a voice of reason and righteous satirical anger that had, we all agreed, played an enormous role in helping us get through the eight horrendous years known as the Bush Administration. And so we told our waitress that we wanted to pay his check. Between us, it was only about $20 per person (including a healthy tip assuming that Jon would’ve left likewise), a small price to pay for preserved sanity.

When the waitress told Stewart that his bill was taken care of, he appeared surprised and a tad uncomfortable, asking whom his benefactors were. The waitress pointed to our table and he came over and thanked us. We fed him the line about the prior eight years, he laughed, thanked us again and rejoined his family as they left the restaurant.

I hadn’t been a big fan of The Daily Show when its host was Craig Kilborn. His frat-boy demeanor always put me off and the show’s humor at the time was far more weighted towards (as Geraldo Rivera anachronistically charged a few years back) making fun of old ladies slipping on ice. Social and political satire became more of the show’s stock-in-trade when Stewart took over the show in early 1999 (finally fulfilling the Kilborn-stymied vision of the show’s co-creator, Lizz Winstead, who left the show in 1997). 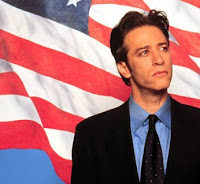 found its voice during the coverage of the 2000 presidential election, presciently dubbed “Indecision 2000.” The frequent and maddening spin coming from both sides of the political spectrum was laid bare in a way that neither the major networks nor cable news outlets seemed capable (or willing). And while the show certainly leaned to the left, it was never mere partisan propaganda, calling bullshit on Democrats as well as Republicans (the circumlocutory John Kerry was a particularly easy, but frequent target). The Daily Show was the antidote to the O’Reillys and Hannitys blindly hewing to the right wing rhetoric in the face of such annoying obstacles as facts and figures.

But The Daily Show was further altered by the terrorist attacks of September 11, 2001. When an emotional Stewart returned to the air, he proclaimed that the show would be different, that easy potshots at President Bush’s frequent malapropisms would be tabled, at least for a while. Naturally (and necessarily), the Bush-Bashing did return, but The Daily Show retained a sense of purpose it had found in the wake of 9/11. The number of political guests now outweighed celebrities plugging movies (although they never completely went away). Serious issues were dealt with in an intelligent, informative manner that never lost sight of the primary objective of being funny.

Throughout the Bush years, the Daily Show

exposed fraud and hypocrisy and ignorance and corruption and incompetence in government and church and the media and business and society. They made use of thoroughly researched, mind-boggling video montages of politicians and religious leaders and Fox News pundits contradicting themselves or practicing hypocrisy over and over and over again. Critics began to talk about The Daily Show not as a faux-news show, but a legitimate outlet for information and discourse.

Jon Stewart, however, steadfastly refused to acknowledge that his little comedy program was to be taken seriously. He repeatedly stated that he was merely hosting a snide cocktail party on the fringe of politics, taking part in the discussion (often vociferously), but never truly impacting any outcome… even when there was evidence to the contrary.

In October of 2004, Stewart appeared on CNN’s CROSSFIRE, one of those double-headed shouting matches where a liberal and a conservative square off against each other and rarely do more than tow the party line. Expecting a lightweight interview with a comedian, hosts Paul Begala and Tucker Carlson were stunned to be pilloried by Stewart, who repeatedly implored them to “stop hurting America” with their predictably partisan, pedantic, ultimately unproductive screeching matches. A petulant, defensive Carlson did battle, but ultimately lost, as CNN president Jonathan Klein cancelled Crossfire the following January, citing Stewart’s spot-on critique as one of the reasons. 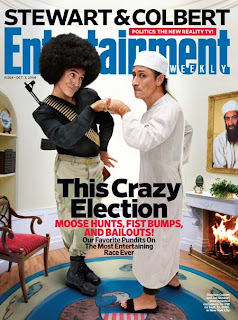 When Barack Obama was elected President in 2008, some worried that The Daily Show would lose its edge in the environment of a Democratic administration. After all, they weren’t going to have George W. Bush to kick around anymore! Of course, when the realities of American politics came crashing down, and those who had had hoped for sweeping capital-C Change had to settle for lower-case, The Daily Show remained essential, holding the new President to his word (in addition to keeping tabs on Congress and those Tea Party morons and Fox News and that Palin thing that refuses to go away...).

But as gridlock and compromise became the hallmarks of Obama’s first two years in office, you could almost see Stewart’s ever-graying hair start to fall out from anxiety. This was supposed to be the new world. And everyone was still just yelling at each other.

And so Stewart, along with Stephen Colbert

(whose COLBERT REPORT has been The Daily Show’s equally vital faux-evil twin since 2005), held The Rally to Restore Sanity and/or Fear in Washington DC in October of last year. Billed as another plea to bring civility to our national discourse, the rally was an enormous success in terms of attendance, with its estimated 200+ thousand people far outnumbering the crowd at Glenn Beck’s “Restoring Honor Rally” likewise held on the National Mall the previous August.

As entertainment, the rally was hit-or-miss. As a rule, comedy doesn’t tend to play well on such a large scale, especially satire (although an off-key duet with Colbert, “The Greatest, Strongest Country in the World” was pretty great). A bizarre 20 minutes was wasted on the MYTHBUSTERS guys performing pointless experiments on the crowd such as measuring the richter scale of a simultaneous jump. The musical guests (including the Roots, Sheryl Crow and Jeff Tweedy with Mavis Staples) often felt like mere filler.

But the rally’s biggest problem was that it tried a bit too hard to be non-partisan. In a serious, twelve minute show-capping speech, Stewart inferred that there’s really no difference between Red and Blue State-dwellers, that we all want the same things, and that it’s only the media and entrenched bureaucratic public servants stirring up the fear and animus that keeps America from fulfilling its promise. But Stewart’s own show has aired hours of field reportage displaying all kinds of fear, hatred and ignorance from plain ol’ folks across the fruited plains. The media may stir the pot, but America filled it up.

In December, Stewart’s righteous anger zeroed in on the Republican-filibustered 9/11 First Responder’s Bill (officially known as the James Zadroga 9/11 Health and Compensation Act). As Republicans cherry-picked what kind of government spending was excessive (tax cuts for the rich = fine), an entire episode of The Daily Show highlighted the issue, including a decidedly non-comedic middle-segment interview with a group of ailing first responders. The next week, a revised version of the bill passed Congress, and was signed into law on January 2nd (a Sunday! Horrors!), with Stewart getting a fair share of the credit.

As he enters his 12th year of hosting The Daily Show, Jon Stewart’s consternation over things not being better is perhaps starting to overshadow his own stated mission of simply being funny. Certainly Stewart realizes that he’s become a player, and not just a referee. How can he not? For years, polls have shown that people trust The Daily Show to deliver the facts more than the cable or network news outlets, and with good reason. This is not to say that there’s a suitable breadth of information to get one’s news solely from Jon Stewart… but more often than not, the stories that do get covered on The Daily Show (and the Colbert Report) are better “reported” than on the so-called “real news.” 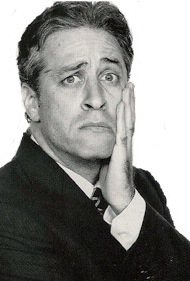 have become frequent, with the key difference, of course, being Murrow was not a satirist, he was a reporter. Jon Stewart’s only real problem is that he cannot admit that he does indeed make a difference. The second he does, everything changes. The Daily Show would lose its satirical credibility, it would become pompous and, ironically, weaker. It’s a fine line that is, at the moment, being precipitously straddled.

Of course, there are many who would argue that The Daily Show crossed that line long ago (mostly those who continue to defend the invasion of Iraq, believe that gay marriage will lead to end times and still think that trickle down economics could work, it just needs a little more time!). I don’t think it has. But I’m in the choir.

The Daily Show may have become more than just a little comedy show off to the side, but it’s still, at its core, just shooting spitballs at power. Okay, so the spitballs now have the size and weight of cannonballs, but they’re still composed of wadded up napkins covered in goo and (usually) delivered with tongue in cheek. Its accomplishments in the real world only cement its place as the most essential show on television.

And I still think that $20 at Cowgirl was a bargain.

Email ThisBlogThis!Share to TwitterShare to FacebookShare to Pinterest
Labels: for real, lover, TV

Spot on. At least until the tongue-in-cheek snotballs....

Great piece, awesome you guys got to pay his tab and have a short conversation with him. Sucks he can never admit to making a difference or being legit. However, you can kind of get that feeling he would like to be seen that way once in a while.
Guess he will always be the voice America needs but not the one we deserve.