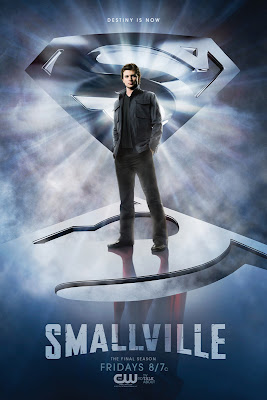 This teaser poster was just released for SMALLVILLE's return this month for the second half of its final season. Note that the Superman reflection under Clark seems to be that first promotional image of Brandon Routh that Warner sent out as SUPERMAN RETURNS

went into production. Man, they really are keeping Tom Welling out of that suit as long as they can!

Before the series returns, here are links to my Starpulse recaps of Season 10 episodes 3-11.