As a rule, I steer clear of internet message boards, both posting and reading. The usually banal, petulant, grammatically challenged, unedited blatherings of the highly opinionated (yet oddly often uninformed) denizens of the virtual world just depress me as we wind our way quickly and decidedly towards Idiocracy. But every once in a while, I’ll forget my rule and toss a few thoughts on some pop culture related board, usually regretting the foray into the troll-crammed morass.

A few weeks ago, when Marvel Comics killed off Johnny Storm, aka the Human Torch of their cornerstone superhero group, the Fantastic Four

, I posited a theory on the Comic Book Resources message board, subject-lined “Anyone smell Disney in this?” I suggested that perhaps Marvel Comics’ parent company (as of 2009) wasn’t too keen on the flammable superhero, harking back to a false rumor in 1978 that the DePatie-Freleng Saturday morning FF cartoon ditched the Torch for H.E.R.B.I.E. the robot for the same reason. If the day comes where Spider-Man, Wolverine and the Hulk mingle with Mickey, Donald and Goofy in the forms of giant wandering foam-costumed characters at Disneyland/World/Galaxy/Universe, maybe a big flaming guy trying to hug the tots would instill more terror than joy.

Of course, I was mostly joking. But I set off an instant firestorm (no pun intended - besides, that’s a DC superhero). Rabid Marvelites immediately sprang to the company’s defense, claiming that Disney has absolutely NO say on anything that happens at the so-called House of Ideas, that the storyline that killed Johnny was planned before the House of Mouse even bought Marvel, and most of all that the artistes in control of the Marvel Universe would never, ever, EVER do anything for commercial purposes! It’s all about the ART!

Well… Okay. Let’s tackle these responses one by one.

• Disney has no say as to anything that happens at Marvel. Then, could someone explain to me why, for absolutely no narrative reason whatsoever, in December, concurrent with the release of Disney’s TRON: LEGACY, a bunch of Marvel Comics featured variant covers depicting their heroes clad in futuristic, glowing TRON-style costumes? What, Marvel did it on its own accord as a show of camaraderie towards its new overlords? Disney may not be sitting in on editorial meetings, but anyone who thinks they’re not taking some sort of role in their new acquisition is simply naïve.

• The storyline was in the works for years. As I haven’t read FANTASTIC FOUR

, I’ll just have to take the fanboys’ word on this one. Like I said, I was mostly joking.

• Marvel Comics places Art over Commerce. Ahem. Okay. Fanboys seem to live in a myopic vacuum where, perhaps because they’re aware that comic books just don’t sell that much anymore, they think that the publishers aren’t beholden to any kind of corporate bean counters, that they just create art for the fans, and if it sells, it sells, if it doesn’t, well, nobody cares.

It's true that, in the case of Marvel and DC (and probably Archie and Dark Horse and a few other publishers), comic books are loss leaders that exist primarily to perpetuate and create characters that can be licensed for merchandise and media, where the real money lies. Batman movies and T-shirts and action figures and mugs and masks et al allow DC to publish the seemingly endless stream of comics featuring the various and sundry Batmen cluttering up their universe these days. But the bottom line still matters. The tale of the (no doubt temporary) demise of the Human Torch may have been masterfully told. I don’t know, and frankly, don’t care. But I do know that killing off a major character sells books, and I’m sure that was the reason that Marvel let it happen.

But let’s talk about another, more sinister case of the bottom line dictating story in the context of a Marvel character.

In March of 1941, nine months prior to America entering World War II, the cover of CAPTAIN AMERICA #1 pictured the red-white-and-blue superhero slugging Adolf Hitler, proving that Joe Simon and Jack Kirby’s character knew who the enemy was before Roosevelt did. While he wasn’t the only, or even the first patriotic superhero, Cap embodied America’s battle with the Axis powers more than any other comic book character before or since. Captain America’s arch-enemy, the Red Skull, was Hitler’s head of espionage, sabotage and other terrorist activities against the Allies.

But in the upcoming movie, CAPTAIN AMERICA: THE FIRST AVENGER, the Red Skull (Hugo Weaving, best known as Agent Smith from THE MATRIX

) is an agent of HYDRA. HYDRA (it’s not an acronym, but it is capitalized) is the Marvel Comics criminal organization bent on controlling the world, with roots that stretch from ancient Egypt through Nazi Germany and ancient Japanese ninja orders. But HYDRA is not a Nazi organization.

The first clue came when early information on the film referred to the Red Skull as an agent of HYDRA, which, in the comics, didn’t exist during WWII. Then late last year, the Disney XD cartoon, THE AVENGERS: EARTH’S MIGHTIEST HEROES (which is a great show, by the way) aired an episode set in the 1940s, with Captain America fighting the Red Skull, an agent of… HYDRA. The cartoon made it clear that it was HYDRA, not the Axis powers that overran Europe and pulled America into the war. And Disney's pretty big on corporate synergy (I'll make an early prediction that the Hulk in the Avengers movie will be the talkative version of the unjolly green giant). 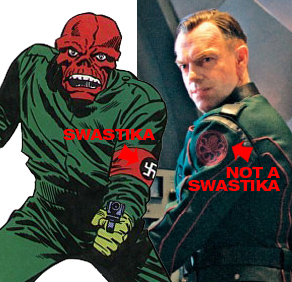 There’s a lot of debate right now as to whether the Nazis will even be mentioned, let alone depicted in CAPTAIN AMERICA. Thus far, the images released depict nary a swastika, while the Red Skull and his minions bear HYDRA patches and symbols. The imdb cast listing doesn’t have anyone playing Adolf Hitler -- or Mussolini or Hirohito for that matter (as a curious side note, in Captain America’s last film, a 1990 straight-to-video disaster

, the Red Skull was a scarred Italian musical prodigy, but he still worked for the Nazis!). But IF the Nazis are completely excised from the film, Paramount and Marvel run the risk of CAPTAIN AMERICA being prejudged as a whitewashed trifle, regardless of whether it’s a good movie or not (of course, much of the film's young target demographic doesn't even know who we fought in WWII, so at least they won't give a crap).

There are obvious reasons for Paramount and Disney/Marvel to not want Hitler in their kid-friendly wannabe blockbuster. It’s hard to market a movie in certain parts of Europe if that dark period of history is treated lightly or in a fictionalized genre setting. But an even bigger reason is that licensees of CAPTAIN AMERICA need to be able to use the bad guy as well as the hero and it’s kinda hard to get swastika-emblazoned toys on the shelves at Target (although Walmart might not have a problem).

Marvel’s official stance is that it doesn’t matter what precise brand of fascism Captain America fights, that he’s a symbol of freedom in the face of all tyranny. But this feels like a case of rationalizing the substitution of the Third Reich for HYDRA. It’s hard to imagine that in the halls of the house that Stan & Jack built, there’s not a little bit of consternation over this major alteration of Cap’s backstory.

Let me point out that I'm not one of those closed-minded, hardcore fanboys who doesn't understand that movie adaptations need to change certain elements of their source material to fit the different media. Christopher Nolan's Batman needs all that bulky armor. I get it. But as I've said many times, there should be a sense of respect paid to the legacy of the character.

In the comic book world, there are few absolutes. Characters die and come back to life all the time, the laws of physics are mutable, and superheroines’ bra cup sizes fluctuate wildly between D and DD. But when you’re dealing with characters that have evolved into icons, certain elements of their stories become set in stone. Superman’s powers come from being born on Krypton, but his values come from being raised in Kansas. Bruce Wayne becomes Batman to avenge his parents’ murder. Hulk smash. And Captain America, in World War II, battles the Nazis.

POSTSCRIPT, April 2011:
So, as more information is leaking about CAPTAIN AMERICA: THE FIRST AVENGER

(or, as it will be known in foreign markets, simply THE FIRST AVENGER so as not to alienate any anti-Americans who probably won't notice the character's red-white-and-blue—and, uh, brown—costume or realize what it represents), one rumor is that the Red Skull starts as a Nazi, then defects to HYDRA because they have a cooler logo. Or something like that. Hey, I'm at least relieved to know that the movie won't completely erase the Axis powers. But we shall see how this thing goes over. I smell a potential lead balloon.
3 comments: