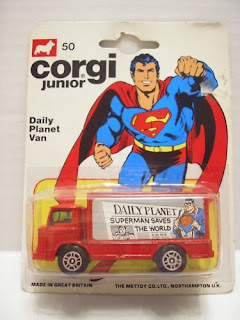 I saw this on eBay the other day, and remember having it as a kid. I also remember, even as a child, thinking that in the comic world of Metropolis, this newspaper delivery truck would be highly unlikely, unless it was the crux of a story in which someone in DAILY PLANET distribution discovered Superman's secret identity, had the design department make a sign revealing said information graphically, and then got it manufactured and put on the side of the delivery van.

But if the goal was nefarious, then wouldn't the designer of the sign have made the headline something less celebratory? Maybe something like, "Man of Steel Causes Millions in Structural Damage Battling Giant Robot!" or "Property Taxes Rise Again Thanks to Stupid Alien!"

Or, maybe this was from one of those "Imaginary Stories" from the 1960s where Clark Kent is revealed to be Superman and Perry White decides it'll be a great boon to circulation to publicize the fact that the Man of Tomorrow is on their staff!

Or maybe the designers at Corgi just didn't care about making their Daily Planet Van believable within context! I am sure that Richard Donner did not approve.