From the ages of about 4 to 29, I had one specific career goal: To draw comic books. Specifically, to draw DC Comics

comic books. For two and a half decades, I practiced, studied, drew and worked towards that goal. I even published some of my own comics (initially with my best friend Nathan as my writing partner, then later doing full duty as writer-penciler-inker-letterer) in preparation for the gig.

In 1993, I finally felt ready to give it a shot and packed up my portfolio and traveled to New York for a portfolio review with the publisher of the characters I loved the most. In addition to my own comics, I included prepared samples of pages featuring Superman, Batman, Green Lantern, the Justice League and other DC heroes

Some of the pages were unfinished pencils, some were fully inked. I also did a few pin-up style drawings, even though I knew that’s not what editors are looking for when they review artists’ work. They want to make sure that you know how to tell a story, not draw a pin-up, but since those iconic posing covers of the Bronze age were one of the things that made me love DC Comics

so much, I threw some in anyway.

I think I also wanted to show that I could letter, and, honestly in retrospect, maybe that’s what I should’ve pursued. I was never more than an average artist at best, but at lettering? Immodestly, I'll say that I think I'm a pretty damn good letterer. Sadly, of course, lettering is now almost always done on computer, and so it’s pretty much a moot point.

Anyway, the outcome was meh. My work was greeted with encouragement, but not really enthusiasm. According to the editors I saw that day, I had a good grasp of storytelling and perspective, and a nice eye for detail, but my draftsmanship needed work.

And of course, they were right. There are some pretty stiff figures in these pages, and I still can’t draw machinery or anything mechanical to save my life.

But instead of continuing to develop my superheroic craft, I moved on. But part of the reason was that in 1993, comics were hip-deep in the so-called “Dark Age” of gun-toting anti-heroes delineated by the likes of Rob Liefeld and Todd McFarlane, driving my interest in the genre to an all-time low. I was far more into alternative comics like LOVE & ROCKETS

, and so I decided to focus on that aspect of cartooning, where I’ve had a wee modicum of success over the years.

To be honest, I’m not sure why I’m posting these. Certainly I put a ton of work into these pages, but today, more than a few of them are pretty embarrassing. I guess maybe after all these years, I finally feel enough distance to document the last gasp of a dying dream without it hurting too much!

I’m putting this stuff here rather than on Tough Guy (my art site) because they’re so old, and really not representative of the kind of work I try to do today. I don’t want people to judge me based on these pages. Not that I could do better than this today, I’m so out of practice as far as this stuff goes that I have no idea how I’d do if I sat down to draw a straight superhero page today.

This is not to say (in case it needs to be said) that I’ve lost interest in drawing superheroes. Even a cursory look at Tough Guy quickly reveals that’s not the case. But my dream of doing superheroes professionally has shifted from appearing in ACTION COMICS to contributing to BIZARRO COMICS

(if it ever gets resurrected) or doing a comics-themed spot illustration for WIRED or ENTERTAINMENT WEEKLY or getting a chance to continue my PRINCE STREET NEWS comic strip for COMIC BOOK ARTIST.
In any case, for the first time anywhere (except for the Batman origin, which was on Tough Guy before I moved it here), here are the pages I took to DC Comics that day (most of them, anyway… there are a few that, even in context, aren’t worth posting). Click on any of the pieces for a larger version (if you DARE!).

I guess I should do some annotating, especially for the non-geeks in the audience.

BATGIRL
This faux-ad was a little prescient. This was a period after Barbara Gordon had retired from being Batgirl, but before anyone had taken up the mantle to take her place. I thought it would be a cool idea to have someone take the identity without Batman’s sanctioning, and he would be none too pleased. But then again, when is Batman too pleased? One of the main reasons I did this page was to highlight costume design (I made up the very early-90s costume that Batgirl is wearing). In these nascent computer days, I was still using press-on letters for things like the blurbs at the top and the bottom. The Batgirl logo was press-on type enhanced with hand-drawn extensions. Oh, and zip-a-tone. I LOVED zip-a-tone. 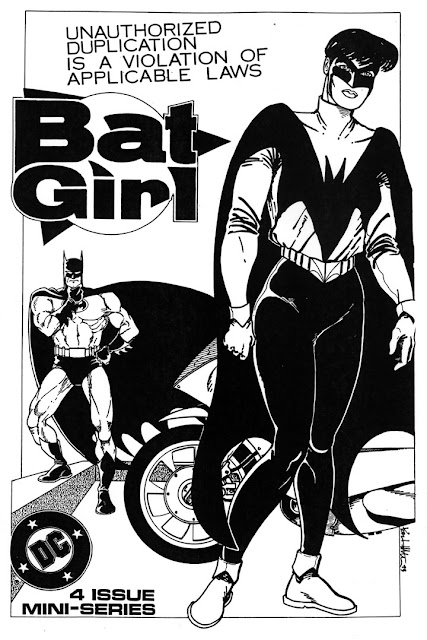 BATMAN SAVES ROBIN (pencils only)
Robin tries to reason with two Gotham City toughs while a third plans to drill him with her gat! Luckily, Batman is nearby. Eh. THE JOKER’S CRYING
Reason enough to summon the Batman to Arkham Asylum, no? A really bad Batmobile and some really stiff figures, but I thought it was pretty decent storytelling. The concept was stolen from an Alan Moore issue of SWAMP THING, by the way. 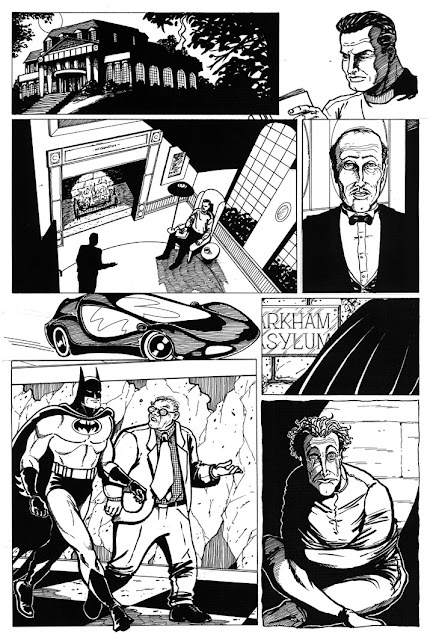 TIM LIKES DINOSAUR JR.
I wanted to draw a few domestic scenes, as I presumed that most portfolios the editors saw were weighted towards fight scenes. What I didn’t realize at the time (since I apparently had stopped reading BATMAN regularly) was that the new Robin, Tim Drake, wasn’t Bruce Wayne’s ward, that he had a father (who has since been killed off). Whoops. I still like the idea of Bruce Wayne only listening to his father’s music (which was jazz), that once his parents were killed, he had no time nor desire to cultivate his own taste in popular culture. Again, the lettering’s the best stuff here. Sigh. 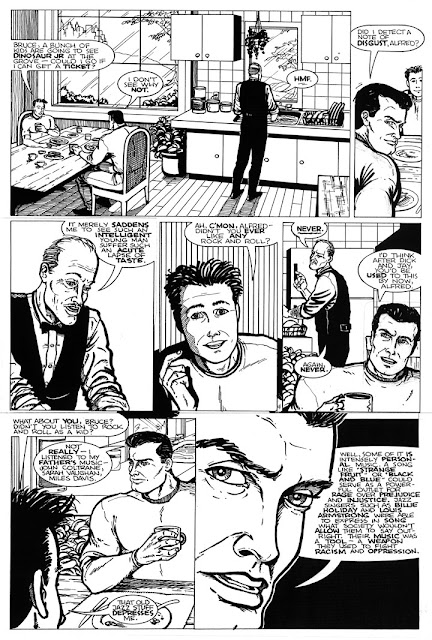 in which Batman somehow encounters versions of himself as portrayed in film and television. The missing lettering was done on computer, printed out and rubber-cemented onto the art. Which of course means that it’s long gone (hence the gray streaks at the bottom). 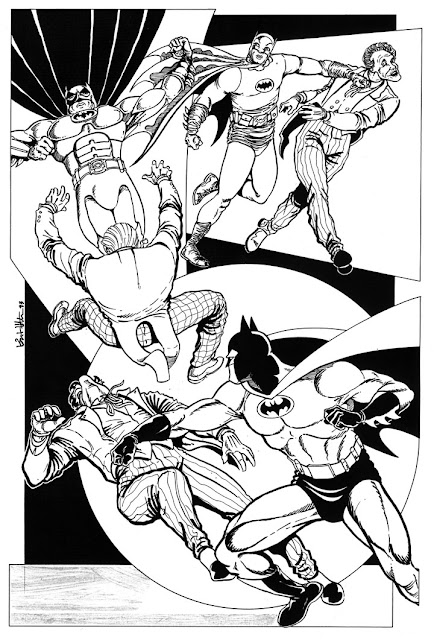 was only about a year old when I did these pages, and his sleek amalgam of Alex Toth and Jack Kirby was just starting to influence comic book art. DC’s THE BATMAN ADVENTURES

was a youth-oriented adaptation of that cartoon, and this and the next page were (sort of) done in that style (although the Joker and Harley are really off-model). I do recall that first panel got some praise for the use of perspective. 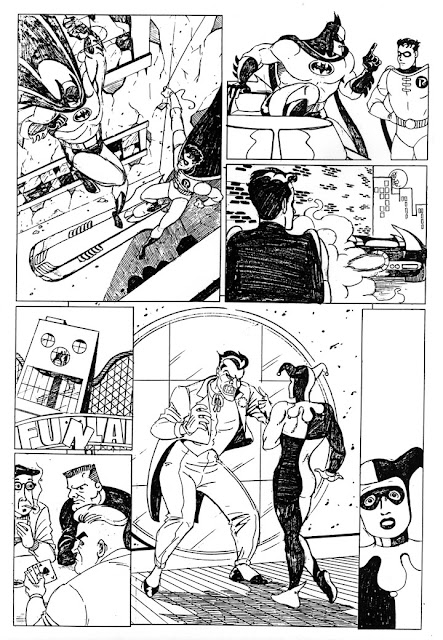 BATMAN ADVENTURES (pencils only)
Oof, that big creature is one horrible design. This was done to show action and page flow. The only thing I really like about it is that last panel insert of Batman standing over the felled villain. 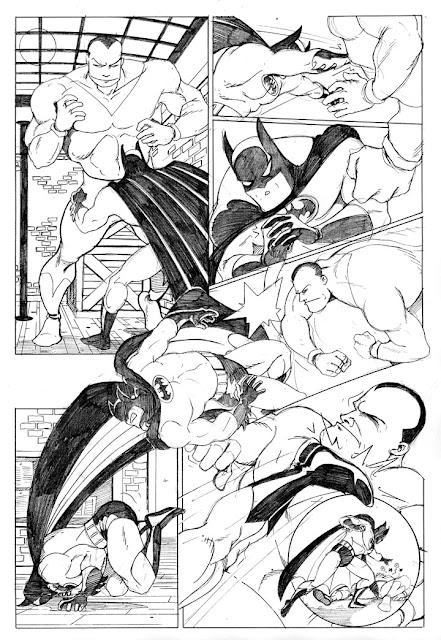 THE LEGEND OF THE BATMAN
Again in the style of the animated series (a bit more on-model than the others, but still not right on), this is a fairly straight adaptation of the classic two page origin from 1939’s DETECTIVE COMICS #33. The Batman logo was based on the art deco logo for the series, but I drew it by hand. A real mixed bag, I detest those last four panels. Yeesh. 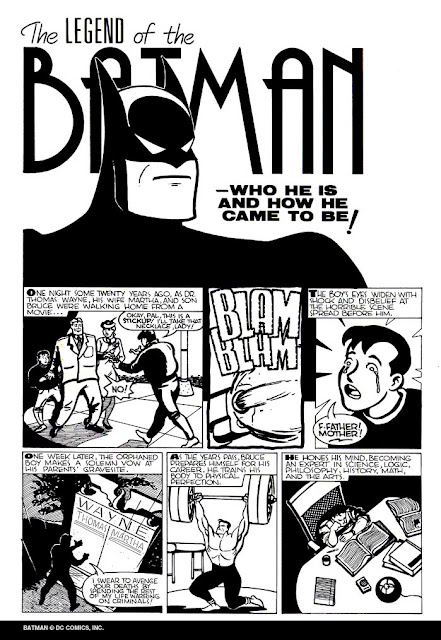 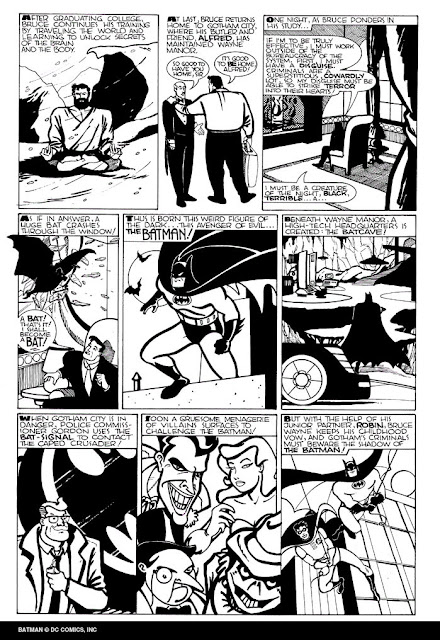 THE FLASH (pencils only)
Another pin-up, mostly included because the plane and the car actually don’t look THAT bad. Oh, and the logo wasn’t done by hand, it was Xeroxed from a FLASH cover and pasted on. 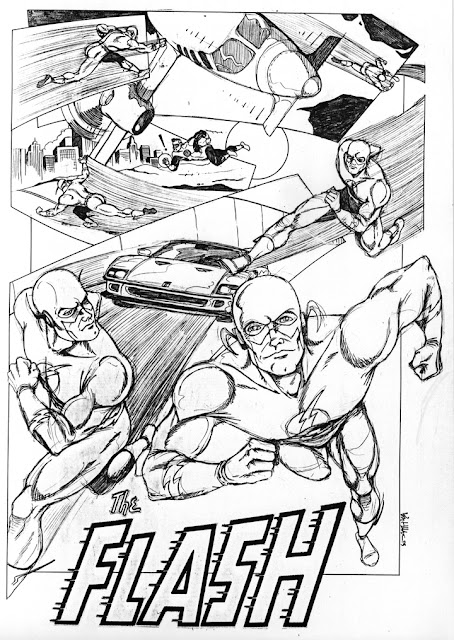 GREEN LANTERN TRAINING SESSION
Oboy. Aside from Hal Jordan, Kilowog and Sinestro, don’t look for any of these other members of the Green Lantern Corps

in this summer’s movie; I made ‘em up. From left to right, we have African-Planet-Female-GL, Insect-Horse-GL, Blind-GL-wth-Tiny-Seeing-Eye-GL and Nerd-Planet-GL. I’m not sure, but I seem to recall it was in my head that it wasn’t really Sinestro attacking them, but a training construct or something. Doesn’t matter. These pages suck! 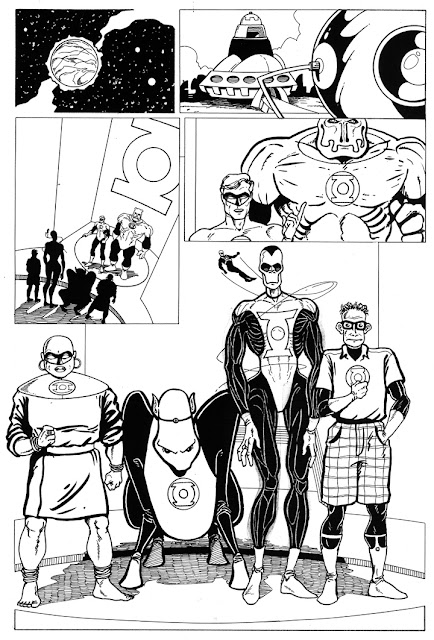 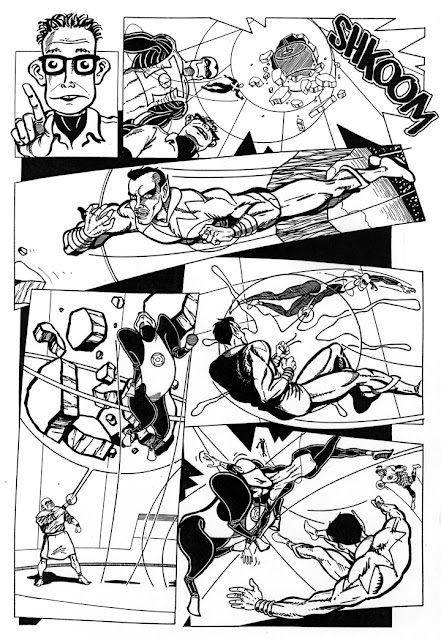 JUSTICE LEAGUE SQUABBLES AGAIN (pencils only)
In the late ‘80s / early ‘90s, the Justice League was going through some real identity crises (no pun intended), with the roster and tone of the book constantly shifting. During this period, there was an awful lot of Marvelesque in-fighting going on at their HQ, and I decided to draw one of those squabbles. The roster here is Fire, Bloodwynd, Martian Manhunter and Guy Gardner. If you don’t know who they are, don’t worry about it (although to date, only Bloodwynd hasn’t appeared in an animated series…. Aw). 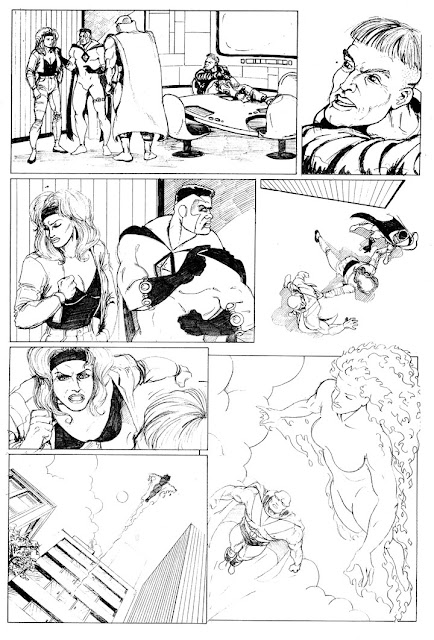 DR. SIVANA’S UNSTOPPABLE MONSTER (pencils only)
A bunch of DC superheroes team up to stop a monster created by Captain Marvel’s arch-nemesis Dr. Sivana in this five-page story. I’m not that good at monsters (as we’ll see again later), nor is Mary Marvel my forte. Tell you what I CAN draw as well as anyone on this planet, though, and that’s Superman’s S-shield. I musta’ drawn that effin’ thing fifty thousand times in my life. Anyway, I kinda like the Daily Planet scenes and the last panel on page 4, but other than that… again, meh. 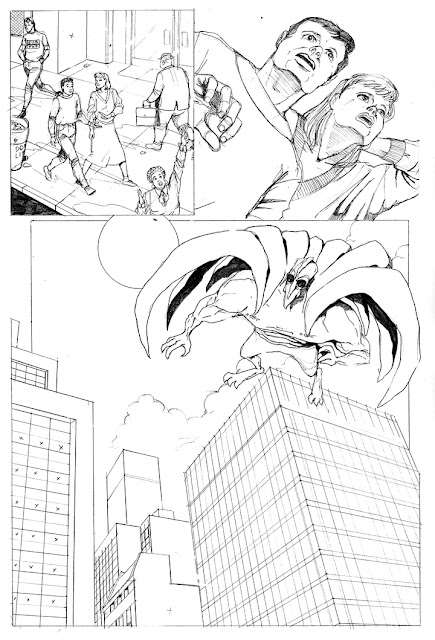 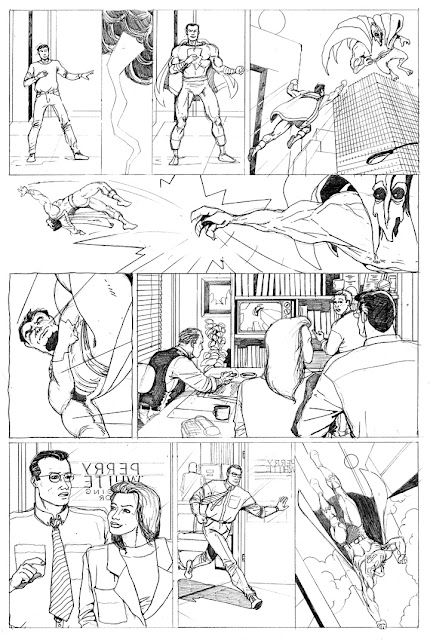 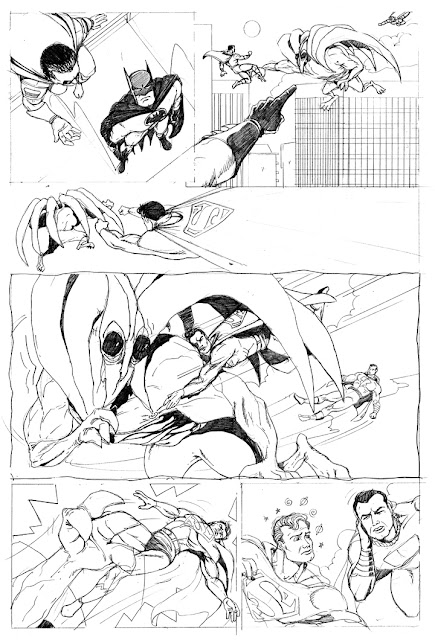 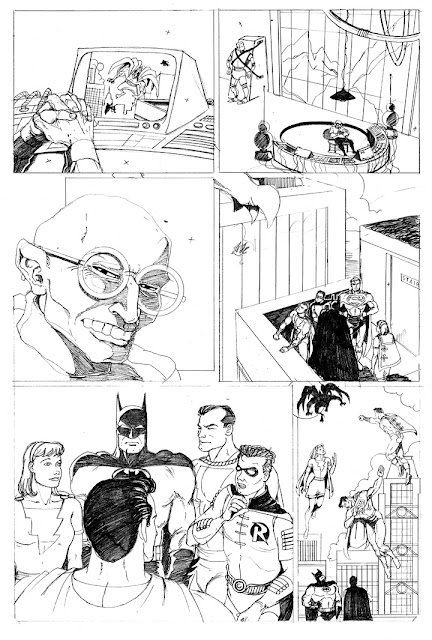 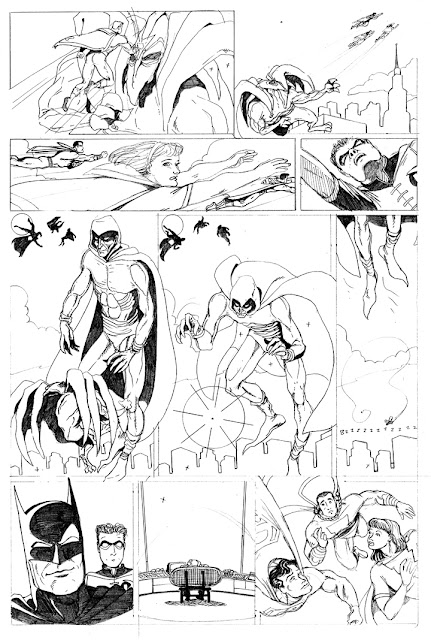 DR. SIVANA’S UNSTOPPABLE MONSTER (page four inked)
Of the five pages, I only inked and lettered this one. By the way, Batman? Really hard to get right, as you can tell here. 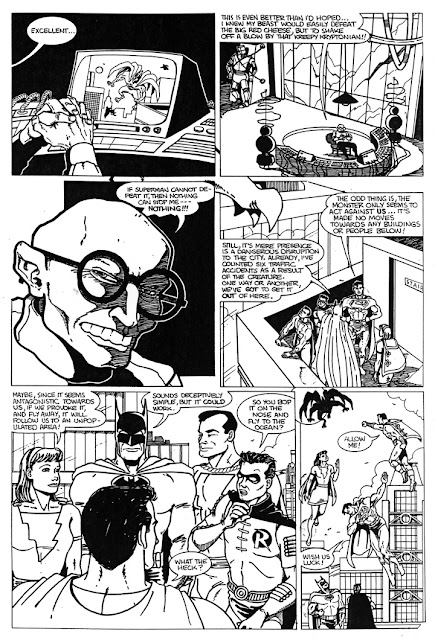 PHANTOM LADY
Faux-cover done for the Quality Comics character acquired by DC. She’s best known for her headlights, as they were once so quaintly called. This was done to showcase another costume redesign. 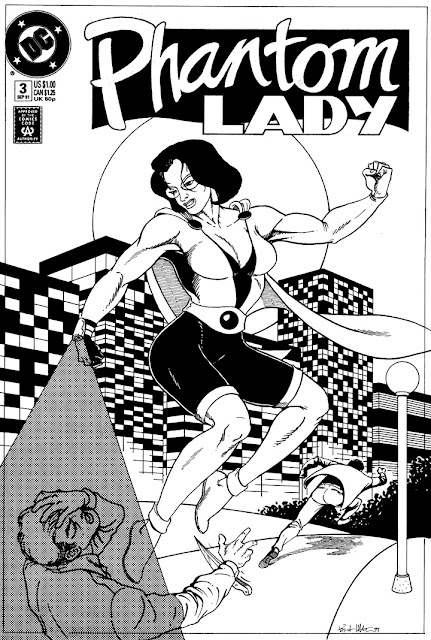 ROSE AND THE THORN
Faux-ad, again primarily to showcase costume redesign (That’s not an exposed nipple-less right boob, that’s a neck-high top that’s a different material than the leathery stuff to the right of the thorns… oh, never mind) and lettering (the logo was done by hand). Man, that sweatshirt on Rose is atrocious. 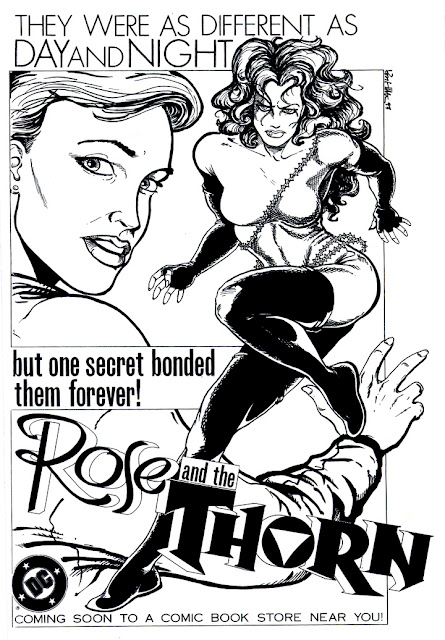 SUPERGIRL (pencils only)
That’s Lex Luthor in the beard. That’s his girlfriend, the non-Kryptonian Supergirl in the biker shorts (another costume design that hasn’t aged well). So much backstory here, I don’t even know where to begin, so just won’t even bother (the Superman titles were pretty complicated at the time). Look it up if you want. More stiffness, but again a pretty decent storytelling flow. I guess. 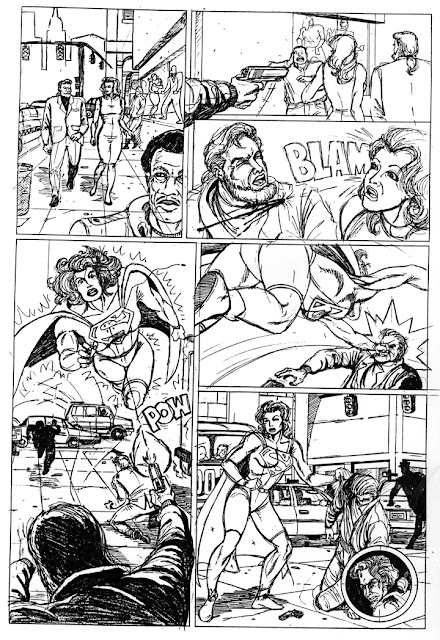 LOIS AND CLARK LOUNGE
Another domestic scene, and a homage to the first Superman film

. And apparently, Lois Lane had a problem with a bad receding hairline in the early 1990s. 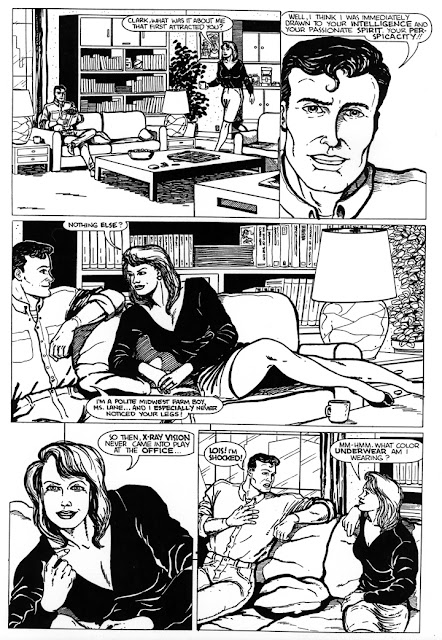 SUPERMAN AND THE RECKLESS PHOTOGRAPHER (pencils only)
I still kinda like this one. 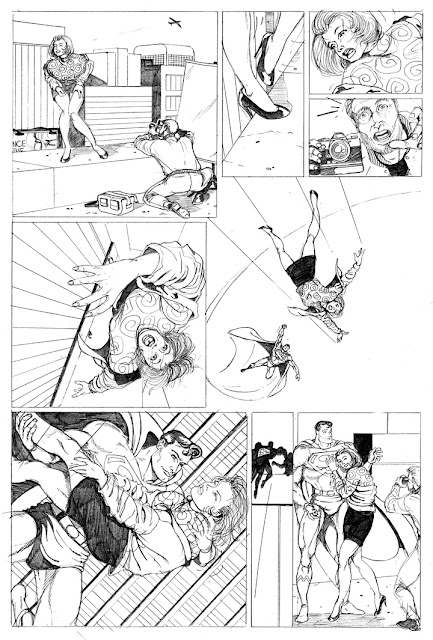 SUPERMAN SAVES THE AFRICAN VILLAGE
Another bad monster / alien design. The fist punch is okay, though. And I NAILED the S! Heh. 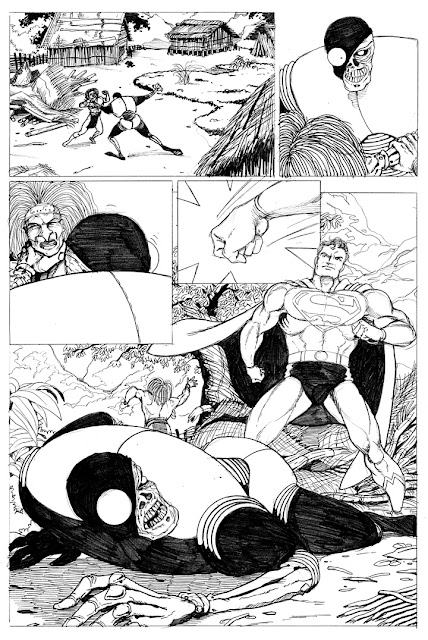 SUPER INSPIRATION
This was a page for a full-length Superman story that I wrote called “Clothes Make the Man” about the iconic power of Superman’s costume. In this segment, a fashion designer is struggling with his new line until he sees a news story about Superman, which inspires him to create an entire line of clothing based on Superman’s costume. Would probably look better in color. And not in the early ‘90s. 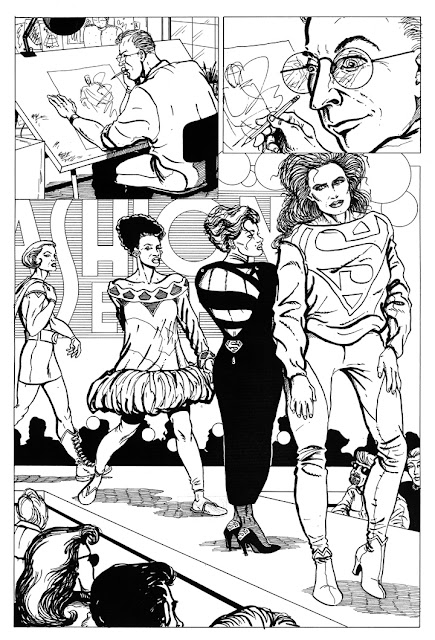 CLARK STANDS UP LOIS
More really stiff anatomy (the crooks in that last panel make me wince, but Superman’s okay there) and the women’s faces are pretty angular and harsh. But I do like the idea. And look how nice Superman’s S looks! 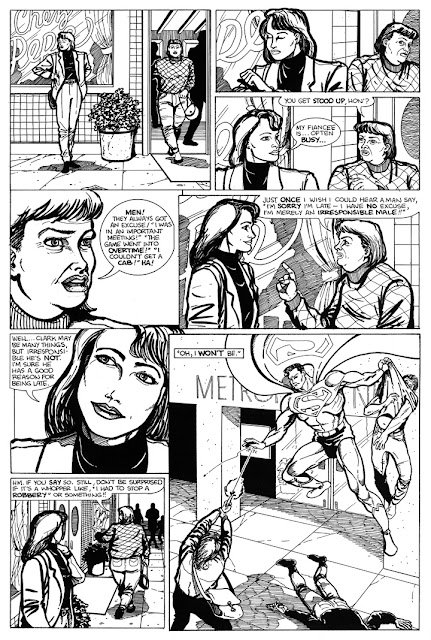