It is the Wrong 'em Boyo!

I have spent much of my four and a half decades on this Earth acquiring things. I am a “collector,” as they say, of numerous aspects of popular culture: Music, comic books, action figures, movies, Superman memorabilia

and Creature from the Black Lagoon

Of course, as with most collectors, issues of money, space and/or a waning of interest can cause periodic purges. Over the years, I’ve gotten rid of more than half of the comic books I’ve bought, and the records and CDs I’ve sold number in the thousands (although probably most of them I got for free). Trying to keep a collection balanced and free of chaff is an ongoing process.

The collector’s mentality being what it is, however, it’s not uncommon for regret to rear its ugly head down the road, and many geeks / nerds / whatever epithet you prefer often find themselves shelling out big bucks to replace something they at one time decided was mere detritus. And it’s usually at a loss. (And this is a wholly separate issue than re-buying beloved childhood items that were destroyed from use… Major Matt Mason, I miss you!).

I have to say, for the most part, I haven’t come to regret losing most of what I’ve purged. There are exceptions of course (Oh, MARVEL SUPER SPECIAL

Although there is one specific item from my past that I wish I still had more than any other, and it’s something that’s so rare, I only came across an image of it on the internet last week (after searching for it many times over the years).

from 1977. This monster measured about three by five feet, reproducing the black and white photo from the cover of the record, with fluorescent pink logo and fuzzed out typewriter lettering running across the top declaring “NEW ALBUM… NEW ALBUM… NEW”. At the bottom was a white banner for promoting a live show. 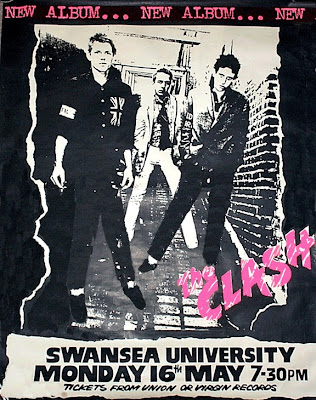 The image here is slightly different than my poster in that mine didn’t promote the Swansea University show (at least I don’t think it did), and this jpeg has been rather sloppily retouched on Paul Simonon’s and Mick Jones’ legs using some digital program.

My poster was also torn, a big chunk was missing from the bottom… or top, again, I can’t exactly recall… but that was okay, it made it even more punk rock.

I also can’t remember where I got the damn thing. I’m pretty sure I was in high school, and I think I picked it up at a record store for a dirt cheap price due to its condition. And while certain details remain fuzzy, I DO know why I don’t own it any more.

She shall remain nameless not to respect her anonymity, but because I can’t remember what girl it was. I think it may have been that girl who had the pet rats. I know that, like myself, she liked the Clash. And since I’m fairly certain I wanted to kiss her, I thought maybe the pot would be sweetened by offering up a token of my affection. Whether I reached my kissing goal or not is lost to the brain wrinkles. I’m gonna guess No.

In a life that, like everyone’s, has seen its share of bad decisions along with the good, this one ranks pretty high. I know, lucky me, one of my “worst decisions” revolves around a POSTER that I gave away. Guys in jail are cryin’ me a river.

But today, in my middle-aged, perpetually arrested adolescence, oh how I would love to have that fuckin’ thing framed and hanging on my wall between the SUPERMAN: THE MOVIE one-sheet

and the original Dan DeCarlo art from the cover of ARCHIE’S JOKE BOOK #101.

How much would I pay to replace this great, lost icon? Hard to say. If the day ever comes where I actually find a copy for sale, it might be relative to how much I had in the bank at the moment. Or it might have more to do with my emotional state at that particular juncture. We nostalgics tend to lose perspective (and besides, who needs to eat that much, anyway?).

But Rat Girl… if you’re out there… and it was you… and you still have it… you know where to find me.

POSTSCRIPT, MAY 2011:
Shortly after writing this post, I did another search on eBay and found a smaller version of this poster for $6.00. Sold. Okay, so it ain't exactly the same, but for now, at least, it's close enough...

Email ThisBlogThis!Share to TwitterShare to FacebookShare to Pinterest
Labels: music, The Clash