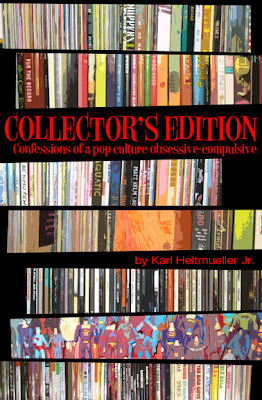 COLLECTOR’S EDITION: Confessions of a Pop Culture Obsessive-Compulsive by Karl Heitmueller Jr. is an examination of the changing nature of popular culture from the early 1970s to today in the form of a memoir. Mixing history, humor and criticism with sometimes embarrassingly personal anecdotes, Heitmueller paints a picture of a life that, at the age of 46, continues to revolve around pop trappings that are usually abandoned upon adulthood. But it’s also about how the evolution of technology has radically altered the consumption of culture, making it easier to acquire and perhaps less meaningful in the process.

COLLECTOR’S EDITION tries to explain the collector’s mentality, and posits that loving STUFF may not be such a bad thing after all. Readers who share the malady of nostalgia will find much to which they can relate, while those who’ve never felt the urge to scour eBay for a long-lost relic of their childhood will hopefully gain insight to the mindset of an oft-ridiculed demographic.

Nice! Can't wait for it to come out!