In honor of tonight’s final episode of SMALLVILLE

Bronze Beauties, including a few that tie into the television series.

Superboy was created by (appropriately enough) Superman co-creator Jerry Siegel and made his first appearance in MORE FUN COMICS #101 in 1945. The tales were light-hearted adventures

of a young Clark Kent donning the red, blue and yellow costume to help his Smallville classmates get out of jams such as rigged soapbox derbies and poorly-attended birthday parties. The character moved to ADVENTURE COMICS in 1946, eventually earning his own titular title in 1949. Over the years, Superboy aged into a teenager and his stories got bigger and more cosmic, no more so than when he met the Legion of Superheroes

The Legion eventually proved so popular that they first shared, then took over the comic from Superboy, leaving the Teen of Steel floundering without his own book until 1980. In the late 1980s, after John Byrne’s MAN OF STEEL

reboot eliminated Superboy from the mythos (having Clark first put on the costume as an adult), new Superboy

s have been introduced into the DC Universe.

(the latest “definitive” origin of the Last Son of Krypton) was the original Superboy reintroduced into the canon. In a respectful nod to other media’s influence on the character, Johns incorporated elements from SUPERMAN: THE MOVIE

as well as SMALLVILLE

into his version of the story, affording the decade-running TV show a level of respect not shared by most fanboys (due to its many liberties taken with the legend).

While I agree that SMALLVILLE ran at least four seasons too long, I accept it on its own terms, as a sort of “Elseworlds

” version of the story in which Superman took longer than every other member of the JLA to appear (rather than inspiring them in the first place). And while I certainly have my beefs with the show, its portrayal of Clark Kent / the Blur / Superman (as of tonight, anyway) is not one of them. The writers stayed true to the spirit of the character, solidly embodied by Tom Welling. For that, I thank them.

I also have a particular soft spot in my heart for SUPERBOY because the first cover below was my very first comic book; My father knew that I really liked Superman (due to the Filmation cartoons

And Pandora’s Box was opened. 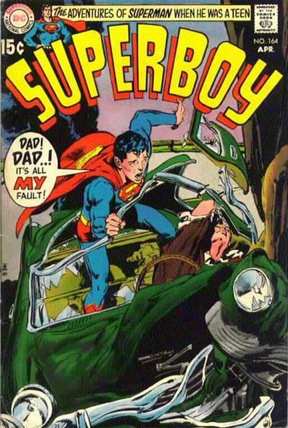 From top to bottom:
SUPERBOY #164 (April 1970) by Neal Adams
(Don’t worry, Pa Kent’s not really dead, that’s an android duplicate in the car)

SUPERBOY #171 (Jan. 1971) by Carmine Infantino & Murphy Anderson
In honor of Smallville’s AC (Aquaman), the first DC hero to guest star on the show

SUPERBOY #175 (June 1971) by Neal Adams & Dick Giordano
Bringing to mind the 2001 pilot, in which a kryptonite-weakened Clark was strung up like a scarecrow 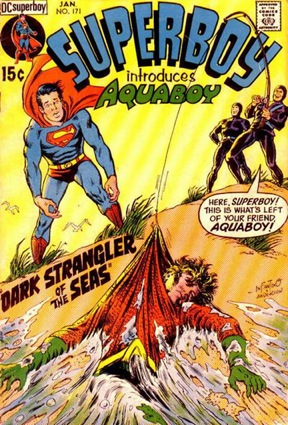 SUPERBOY #204 (Oct. 1974) by Nick Cardy
Because Smallville featured appearances by all four members of the Legion depicted on this cover (from left, Lightning Lad, Saturn Girl, Brainiac-5 and Cosmic Boy) 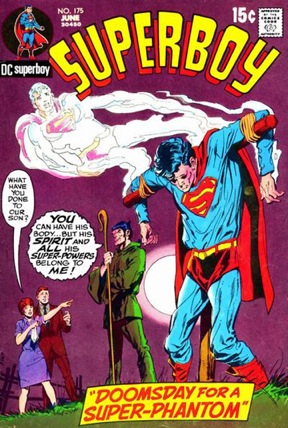 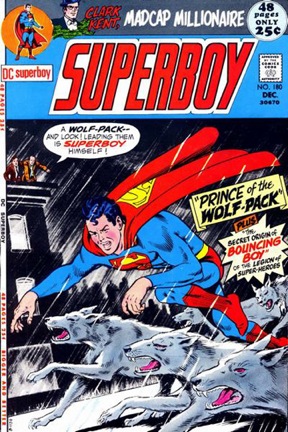 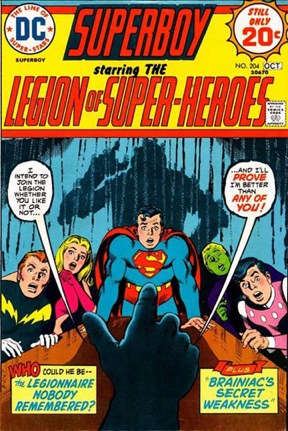