With one to go... Smallville final season recap catch-up 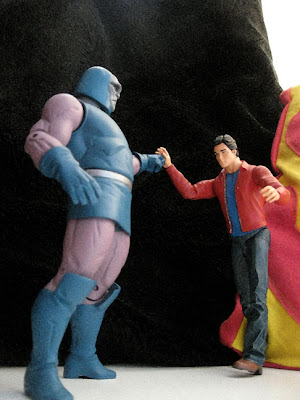 After ten years, this Friday the CW's SMALLVILLE comes to a conclusion, presumably beginning the story of Superman (as opposed to "the Blur," the superhero name Clark Kent has been using for the past few seasons). While it's true that a story that should've ended at least five years ago has been dragged out to the overall detriment of the show's legacy, this final season has mostly been a pretty good one for fans of the Man of Steel.

or any other adaptation. Aside from the inherent restrictions in adapting Superman for television (or at least as they were in 2001, when the show premiered), once SMALLVILLE became a hit, the producers of this show had to figure out how to elongate a story long past its logical conclusion while still staying true to both the show's edict and the legacy of the character. And they didn't do a bad job, considering.

I'll write a bigger piece on the legacy of SMALLVILLE

after the finale this weekend, but for now, here are the links to my Starpulse recaps of the past nine episdes just in case you wanna get caught up (the earlier links can be found here).

Hmm, the recap for "Fortune" seems to have vanished into the ether(net), so I'll fix that when it's found by the Starpulsers.