COLLECTOR'S EDITION excerpt #2: The Superman Peace Poster and the Revenge of the Baby Brother

Through the 1970s, I faithfully read SUPERMAN and ACTION COMICS

, as well as most issues of numerous other comics that featured the Last Son of Krypton, including SUPERMAN’S GIRL FRIEND, LOIS LANE (the separated words connoting an entirely different meaning than the compounded “girlfriend”), SUPERMAN’S PAL, JIMMY OLSEN, SUPERGIRL, THE JUSTICE LEAGUE OF AMERICA, WORLD’S FINEST, and more.

Images of my favorite superhero practically wallpapered my bedroom. An artist friend of my aunt’s made me a black light painting of Superman in flight over a meticulously-delineated bed of dozens of interlocked S-shields. I had a Thought Factory poster of a beautiful painting by movie poster artist Drew Struzan

depicting a regal Man of Steel posing with arms akimbo, cape draped over his left shoulder, his right foot propped up on a rather random-seeming panel enlargement from a Superman comic book.

And then there was the Superman peace poster. In 1971, a full-page ad in DC Comics touted two different sized posters of Superman (in new drawings by Swan

) flashing a peace sign. The smaller one—awkwardly named "Super Right on Target"—was an upshot of the hero in front of a circular stars and stripes motif, a stern expression on his face, his left hand raised in the co-opted V for Victory sign.

Since my parents wouldn’t spring for the full $3.50 + S&H for both, I chose the second poster, a two-by-six foot whopper depicting the Action Ace in full flight, arms extended above his broadly-smiling head, his right hand flashing the two-fingered peace sign. When it arrived in the mail, I pulled it out of its protective cardboard tube, and thought my eyes would pop out of their sockets. While even at a young age, I thought the legs seemed a bit truncated, this almost life-size image may have been the most magnificent thing I’d ever seen. It was proudly taped to my bedroom door with masking tape donuts all over the back (I can hear some of you gasping even as I type those words), a proud sentry to my own Fortress of Solitude for about four years. Until that day. That awful, awful day. 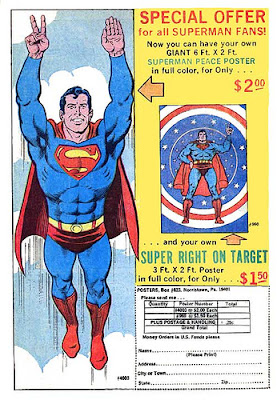 My brother Ken, my only sibling, is six and a half years my junior, which is a pretty big age difference. It wasn’t until I was in college and he was in junior high school that we finally started to relate to each other as members of the same generation. Prior to that epiphany, we were practically arch-enemies. Not that I didn’t love him, but I loved torturing him more. I would hide in his bedroom closet at night while he was fixing his bedtime glass of chocolate milk, then wait for him to nestle into bed before tearing open the door and howling like a homicidal maniac, sending Kenny into a panic. I would sit on his chest and pin his arms with my knees while tickling him until he practically peed his pants (his main defensive move was to try to spit on me). I would turn off all the lights while we were in the attic and pretend there was someone else up there with us.

On one particular sunny afternoon when I was about 12 (placing Ken somewhere around six), I was performing some rite of torture on my little bro’ which drove him into a particularly hyperactive fury, chasing me around the house as I laughed, secure in the knowledge that he’d never be able to catch his much longer-legged, faster elder brother. Eventually tiring of the game, I ran into my bedroom and slammed the door, locking it to keep the ravenous Tasmanian Devil safely on the other side.

I remember almost immediately thinking, “Oh, no….” as I realized my tragic mistake. One second later, I heard a long, loud RRRIP coming from the other side of the door. I turned the handle, the simple button lock popping as I pulled the door towards me just in time to see the bottom half of the Superman peace poster fluttering to the floor.

Kenny just stood there in shock, unmoving, knowing that he’d struck the deeper blow, that the dynamic of our battle had instantly changed, but also fully aware that I was going to be PISSED. And so, my temples pulsing with rage, I did the only thing I could think to do: I punched my baby brother in the stomach as hard as I possibly could, so hard that it lifted him off the ground before he fell to the tiled linoleum floor, gasping for breath.

Now it was my turn to be scared. I backed into the bedroom and shut the door, still upset about the poster, but hoping that I hadn’t just killed my only brother.

Ken recovered. As for the poster, rather than simply taping it back together, my mother cut the bisected Superman figure from the background and mounted it on heavy posterboard, thus protecting it from further rending, I guess. I decided the repaired poster would better serve me taped to my bedroom ceiling, and not just because I could pretend that Superman was flying overhead, reminding me to love my brother. I knew Ken couldn’t get to it up there.
___________________________________________________________________
excerpted from the forthcoming book
COLLECTOR'S EDITION: Confessions of a Pop Culture Obsessive-Compulsive
by and © Karl Heitmueller Jr.

A knuckle sandwich to the breadbasket. Way to honor the peace, dude.

Now i'm 40 and having mysterious abdominal issues.
thanks, BRO!