has been a sometimes anachronistic symbol of a simpler time, when good and evil were more black and white, when patriotism didn’t carry a sheen of arrogant jingoism. In the 1970s, Steve Rogers, like many others in the “Me Decade” spent a lot of time trying to “find himself,” but at least Steve had a good reason to feel lost. After all, he had only been unfrozen from that ice for a short time. If you have no idea what I mean, you will after CAPTAIN AMERICA hits the theaters this weekend. 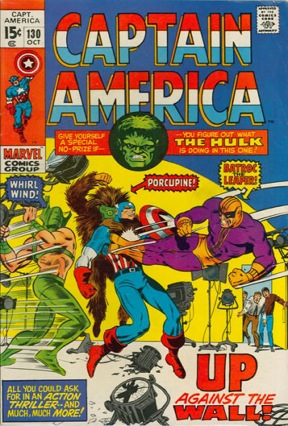 (Oct. 1970) by Marie Severin & Joe Sinnott
I love this cover because it features three of the lamest super villalins in comics history: Whirlwind (who spins around really fast), the Porcupine (who has a suit that shoots spikes) and my favorite, Batroc the Leaper (who can jump really well)! Still, the clean lines of the Marie Severin cover are a joy to behold.

(Aug. 1971) by John Romita
In the 1970s, Cap’s sidekick was the Falcon, who was, believe it or not, the first major African-American superhero, introduced in #117 in 1969. I know, right? Comics were not the most forward-thinking medium prior to the Bronze era.

(June 1973) by Jim Starlin and Joe Sinnott
Cap covers often had a poster-like quality to them, which was generally scorned by Marvel’s action-oriented editors. I still remember being blown away by seeing this one on the newsstand when I was in the third grade. I particularly like the drooling dude at the bottom.

(Oct. 1973) by Rich Buckler & Frank Giacoia
Hands down, my favorite Cap cover of all time, and it’s purely because of nostalgia. If that cover were drawn today, those would totally be zombies instead of mummies. 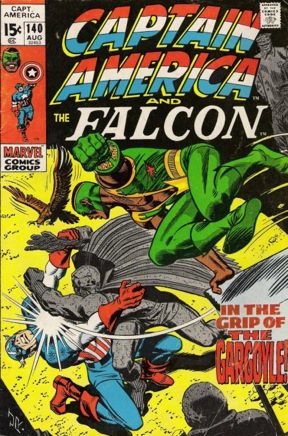 (March 1981) by Frank Miller & Joe Rubenstein In the early ‘80s, writer Roger Stern and artist John Byrne had a memorable run on CAP, during which he actually ran for President. This 40th anniversary issue retold Cap’s origin and featured this cool retro cover by Frank Miller (way before he became a batshit parody of himself). 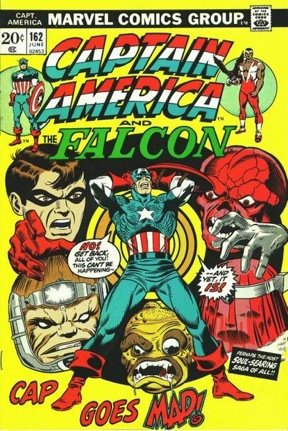 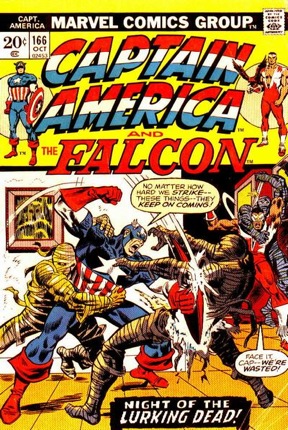 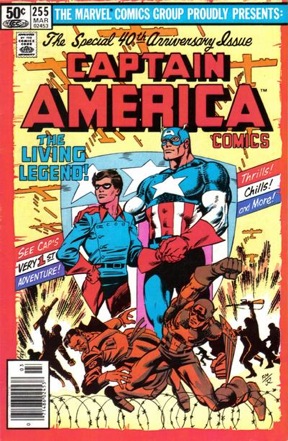