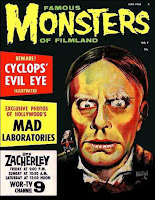 In the late 1960s, magazines such as EERIE

and FAMOUS MONSTERS OF FILMLAND featured advertisements for “200 feet 8mm HOME MOVIES” of old horror and science fiction films like I WAS A TEENAGE FRANKENSTEIN, THE BLOB and a particular Saturday afternoon monster movie favorite of mine, WAR OF THE COLOSSAL BEAST. Also available was the clunky 1943 BATMAN movie serial

, its twelve chapters edited into six 8mm reels. The full-page ad—replete with then-contemporary BIFF! BAM! POW! embellishments—erroneously touted the low budget, unintentionally campy series (unseen for decades) as “spine-tingling,” but neglected to mention that the edited reels did not contain any audio!

To facilitate viewing, you could also order, for a mere $9.98 (plus $3.00 shipping and handling) a portable 8mm movie projector, with accompanying screen. In those ancient pre-VHS days, this was the only way a collector could build a library of movies (unless, of course, he owned a motion picture studio).

When VCRs hit the market in the 1970s, compiling a home video collection was still pretty much inconceivable due to the high cost of commercial videotapes. Since the home video industry was initially focused on the rental market, the studios would charge an average of about $75-100 per cassette, knowing that Blockbuster Video was going to make many times that on rentals of each unit. Once VHS recorders became ubiquitous, the average list price lowered to make videotapes more affordable to the general public.

But even after VHS became the standard format, building a library of TV shows was next to impossible. The few shows that were available on videotape were either samplers of “best” episodes or merely the pilot and maybe one or two subsequent shows. Which meant that we pop-obsessives had to make them ourselves.

I began collecting movies and TV shows in the late 1970s, but in the beginning, it wasn’t on video.

When I was 13 years old, my father bought me a portable Panasonic tape recorder, the kind with the little built-in speaker and the row of control buttons on the front. My younger brother had received one for his birthday a month earlier and I was stealing it from him and using it so much that I had to be given my own (much to Ken’s disgust).

I recorded some songs off the radio, made some “comedy” tapes (look for the CD reissue of my Three Mile Island and Superman interviews sometime soon), but mostly, I taped stuff off of TV. At first I just recorded random things like theme songs, commercials that I liked, favorite Warner Bros. cartoons and stand-up performances from THE TONIGHT SHOW. But soon, I started recording full television shows.

I’d set the tape recorder on a stool right in front of the TV’s speaker and kneel before it—call if genuflection if you will—manning the Record/Pause buttons to edit out the commercials. Timing was crucial, I had to make sure I got the very beginning of the show and every bit of the broadcast right through the end theme. If anyone walked into the room while the tape was recording, I’d make the “shushing” motion with my finger at my lips. However, if it was a show that displayed the name of the episode at the beginning, I would speak the title aloud into the mic, in as dramatic a timbre as my changing voice could muster. Aside from that, the only acceptable background noise was laughter during comedies (my own laugh track enhancement, I guess). But any questions about what was going on (my Dad was always one of those “Who’s that? What did he do? Did that guy kill that other guy? Where is this?” viewers) were angrily ignored. Yep, I was one annoying little dork. 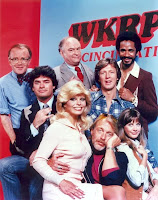 . 60-minute cassette tapes (bought at Lafayette Electronics in three packs with no clamshell cases) holding one episode per side began filling my desk drawers. Every episode was given a title—which I had to make up in those pre-IMDb days—and labeled with volume numbers. I started recording WKRP around the time that the first 1978-79 season went into reruns, so I didn’t have a complete chronological archive in order, but that didn’t matter. Hey, I’m anal-retentive, not insane .

With WKRP, there was added pressure to get the entirety of the end credits theme song, a rockin’ number with some really hard to decipher lyrics. While most of the time, the song would be interrupted by a voiceover of a CBS announcer telling us what hijinks were coming up next on ONE DAY AT A TIME

, there were a few instances where the song played in full . I would listen to the tape over and over again, trying to figure out what the hell that guy was singing. It sounded like he was telling a bartender that he was going, going, going like mad, aw-haw.

The next show that I regularly recorded premiered in 1980 and took up twice as much tape as WKRP, being an hour-long drama about a former navy intelligence officer who lived for free on a wealthy novelist’s estate (to the perpetual annoyance of its major domo) while eking out a living as a private investigator, often employing the begrudging assistance of two friends with whom he fought in Viet Nam. 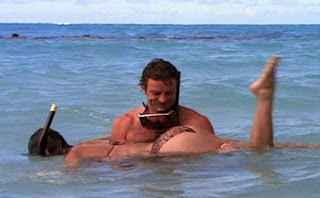 For years. And listened to it. A lot.

Okay, so maybe the Hawaii-based detective show wasn’t exactly Mamet, but I found the banter of Magnum, Higgins, Rick and T.C. (and sometimes Robin Masters, voiced by Orson Welles, which I knew was a big deal even at the age of 15) highly entertaining, and I still hold the opinion that the first two seasons of that show were some really well-written little dramas (it got spotty after that). Besides, the show’s score (including both themes, the initial jazzy one by Ian Freebairn-Smith that was replaced with the more iconic Mike Post

anthem in the tenth episode) was sometimes as good as a James Bond soundtrack as far as I was concerned.

Again, there are some bits of dialogue that remain forever lodged in my brain, popping out of my cake hole in Pavlovian response to the proper stimulus. Any time someone orders a boilermaker at the bar where I tend, I pull out a line from the first season episode “All Roads Lead to Floyd” explaining that “a beer and a shot—that’s one drink.”

I audiotaped all Steve Martin’s NBC comedy specials of the late 1970s, and made compilations of skits from SATURDAY NIGHT LIVE

(for my money, the greatest ensemble sketch comedy show of all time), and LATE NIGHT WITH DAVID LETTERMAN

. The nice thing about recording those shows was that if a sketch, monologue or interview wasn’t worth keeping, I would stop recording, rewind to the end of the last good bit, then start again with the next segment. Depending upon when I decided to kill the bit could cause some stress, however, as I had to make sure to get to just the right spot before the next recording could start. There was a lot of frantic FF and REW button pushing.

As far as movies went, the only time I audiotaped a film off of televison was when ABC aired an extended cut of SUPERMAN: THE MOVIE

in 1982. The full 182 minutes took up three cassettes, but it was worth it. It would be almost two decades before some of the added scenes would make it onto home video, and to this day, a scene where Otis “feeds the babies” (meaning some offscreen lions or tigers) has somehow remained absent from any deluxe reissue.

Random bits recorded off of television fell under a catch-all umbrella series called FOUND A JOB, named after a song about a television-writing couple

. FOUND A JOB was also the destination for the rare times when punk or new wave groups that I loved would appear on TV.

from the forthcoming book, COLLECTOR'S EDITION: Confessions of a Pop Culture Obsessive-Compulsive
by and © Karl Heitmueller Jr.

I and my family are much loved horror movies. And the horror films I've saw is a Supernatural, Paranormal Activity, Zombie Island, etc. And I really loved it. Usually, my family and I always watch a movie by using projector every weekend, because it is much more comfortable.