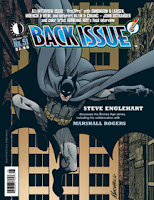 It's plug time, kids! The first installment of Prince Street News, my comic strip about comics has just hit the stands in the new issue of Michael Eury's BACK ISSUE MAGAZINE, #51, an all-interview issue featuring writer Steve Englehart, artist Walt Simonson in conversation with frequent collaborator Erik Larsen, a writers discussion between Doug Moench and Len Wein, letterers Janice Chiang and Todd Klein and the final interview with the late colorist Adrienne Roy.

My strip is the centerspread of the magazine, printed in full color. It's entitled, "Icon" and it's about the evolution of Superman's appearance in light of his new costume in the comics. I'll post the full strip on my art site, TOUGH GUY GOODS and SERVICES when BI #52 comes out, so if you want to see it now, head on to your local comics store, Barnes & Noble or order Back Issue from the TwoMorrows website.

The next episode of PSN will be in BACK ISSUE #54, the Liberated Ladies issue, shipping in January, 2012. It's a look at the thin line between acceptably sexy and exploitatively silly in the context of superheroine costumes.
No comments: